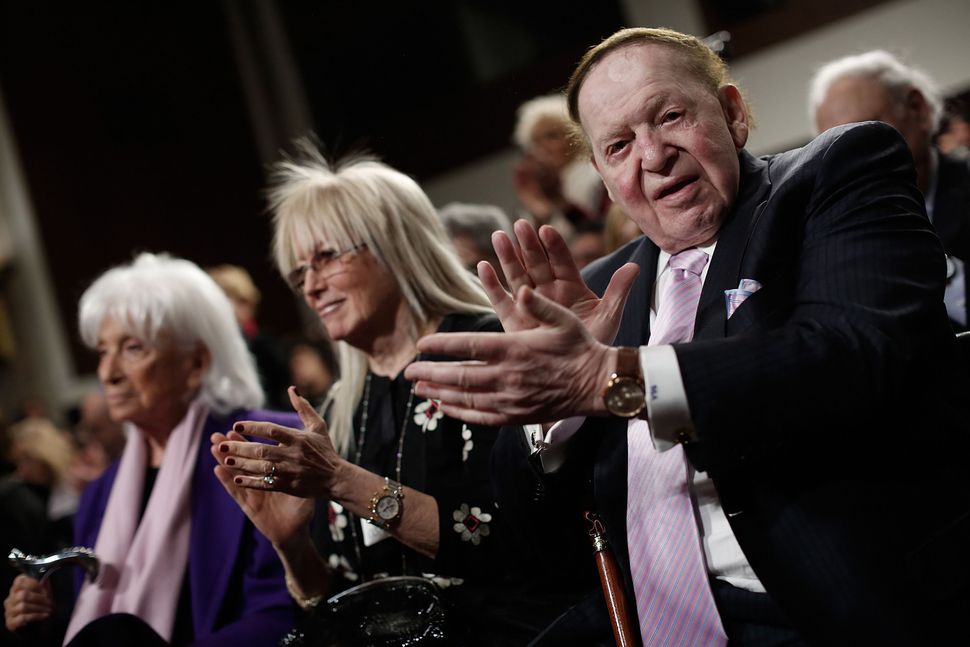 If you had told me two weeks ago that Sheldon Adelson would emerge from the coronavirus crisis a hero, I would not have believed you. A casino mogul worth close to $40 billion, Adelson is most famous for funding Republican and right-wing political campaigns and movements; he was the largest single donor in both the 2012 and 2016 presidential campaigns, donated millions to Trump’s inaugural festivities, and has played a not insignificant role in the rise and reign of Israeli Prime Minister Benjamin Netanyahu, making him a bête noir to liberals and the left.

But this week, a major plot twist: While Adelson of course has closed his casinos in response to Covid-19, there will be no layoffs or furloughs at his companies. On Wednesday, amid news that a record 6.6 million Americans had filed for unemployment, Adelson announced that every one of his 10,000 employees would be paid for the next two months.

“To my fellow corporate executives who are looking at spreadsheets and trying to determine the impact this crisis will have on sales and share prices, let me say: Our job as business leaders is now as simple as it is challenging,” Adelson wrote in The New York Post. “It is to maximize the number of employees and their families that we can help — and help them for as long as possible.”

It was a lesson he learned from his father. “He would come home from work — when he could find work, that is — and put loose change in the family pushke (charity box),” Adelson wrote. “When I asked why he would give to others when we had so little, he would say, ‘There is always someone whose need is greater than ours’.”

There’s no two ways about it: This was an incredible gesture, a gift of millions of dollars to workers that will save them months of worry, poverty, and perhaps even their lives. When one considers the desperation that so many are already experiencing, and that so many more are about to experience, it’s impossible to overestimate the power of Adelson’s decision. Bravo, Mr. Adelson.

And yet, what makes this gesture so meaningful — or really, meaningful at all — is the fact that it was Adelson’s choice. There is no law that mandates paid leave in this country. Adelson himself has clashed with Las Vegas’s Culinary Workers Union, maintaining that the benefits he gives his employees are better than union benefits. And he’s backed many political candidates who oppose expanding the social safety net.

In fact, for Adelson, maintaining the choice of when and how much to give back – what we might call the value of charity — is one of the reasons he left the Democratic Party his parents belonged to for the Republicans. “States that vote Republican are now far more generous to charities than those voting Democratic,” he wrote in an OpEd in The Wall Street Journal in 2012 entitled “I Didn’t Leave the Democrats. They Left Me.”

“Democrats would reply that taxation and government services are better vehicles for helping the underprivileged,” he went on. “And, yes, government certainly has its role. But when you look at states where Democrats have enjoyed years of one-party dominance — California, Illinois, New York — you find that their liberal policies simply don’t deliver on their promises of social justice.”

The model Adelson represents — of a billionaire making obscene amounts of money and then choosing when and where and how and how much to give back to the community — is a quintessentially American one, a hopeful view of the promise of rapacious, unrestricted capitalism. America is, after all, the most generous country in the world, according to a 2019 report by the World Giving Index. American foundations and companies donated $410 billion in 2017 — 2.1% of our GDP, according to Gallup.

But recently, this American idea is standing in starker and starker contrast with another one: the American Dream. America’s rich people may be more generous than those of other countries, but the social mobility meant to propel more and more Americans into the ranks of the rich has all but ceased to exist.

Millennials are the first generation since 1940 to make less money than our parents. The income growth that applied at roughly the same rate across the income ladder between the 1940s and the 1970s has stalled for those at the bottom. And it’s not because workers are producing less. Net productivity has risen about 70% since the 1970s, but the hourly pay of typical workers has stagnated.

“Although Americans are working more productively than ever, the fruits of their labors have primarily accrued to those at the top and to corporate profits, especially in recent years,” concluded the Economic Policy Institute in its annually updated report.

It’s facts like these that have fueled the popularity of another player in the last four years – Sen. Bernie Sanders of Vermont, who is currently still running for the Democratic presidential nomination. Sanders’ view, which has remained consistent throughout his many decades of public service, has always been that America should be more socialist in nature. The rich should be forced by government to pay for things like universal healthcare and free college, elevating the have-nots with the wealth this country has bestowed upon them.

And with coronavirus hitting the poor the hardest – something that is certain to increase exponentially, given that poor people cannot self-isolate – the current crisis is set to be a referendum on whether the American model Adelson represents still has purchase.

We owe Adelson thanks. But we owe it to the American people to question the model that made his generosity possible.