‘Zoom shiva is shiva distilled to its essence’ 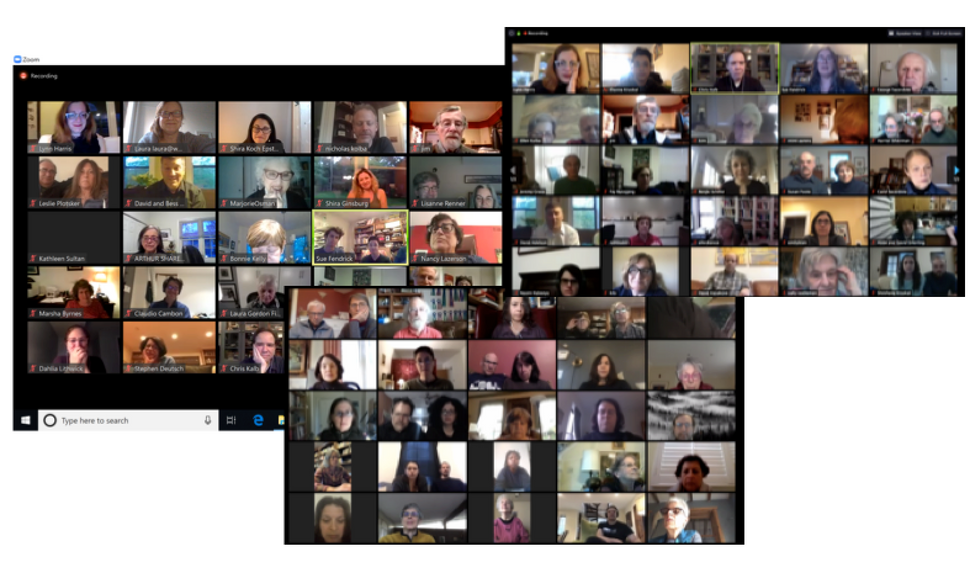 Screenshots from the author’s Zoom shiva. Image by Courtesy of Lynn Harris 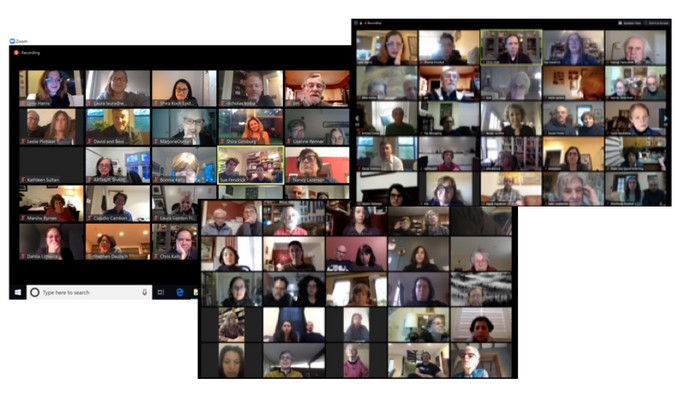 Screenshots from the author’s Zoom shiva. Image by Courtesy of Lynn Harris

I am one of those people with one of those stories. My mom, 83, went into the hospital in early April with something relatively routine. A few weeks and complications later, she went to a rehab to regain her strength. My dad delivered her reading glasses and an everything bagel to the door, knowing, of course, that he couldn’t go inside.

Then mom got pneumonia—regular pneumonia, the doctor said. On Monday an update: mom had COVID. Doctor friends told me renting a car was OK. My nurse cousin said to pack my own plate, cup, and fork so if Dad gave me food I wouldn’t have to hand stuff back. I found a place to stay. A friend dropped off a good medical mask. On Tuesday, I left my husband and kids in Brooklyn and drove to my dad in Massachusetts. He sat on the porch and I sat on a chair in the yard.

On Wednesday, my mom died. Dad had not seen her since the night she’d left in an ambulance. When he hung up the phone, we stood two rooms apart and cried. She’d made a late-breaking request to be cremated. Long story short, no burial. We never saw her again.

Friday at noon, my dad sat at the dining table and I on the couch. We did a tequila shot, hit “Start video,” and had my mom’s funeral. For the next three nights, Zoom shiva, too.

I hate COVID-19. The birdsongs and sourdough are nice, but I hate it. It took my mom, and it took everything—from both me and my dad—about losing my mom.

But there is one thing for which I will forgive COVID. Before this spring, these words would have read like random refrigerator poetry, but: Zoom shiva is amazing. Zoom shiva is all of the shiva and none of the fuss. No noise, all signal. It’s not “virtual” shiva. It is shiva. I could have used a hug, but still. Zoom shiva is the best shiva.

My mother’s name was Florence. Some called her “Flo.” We let guests know that after the minyan, we’d ask them to share memories, three minutes max, warning that the rabbis in charge would keep time ruthlessly. I called this, you will forgive me, a “Flo-pen mic.”

We showed slides of my mom as people gathered. Then—as with her funeral, also astounding—we watched as people popped onto the screen, some with only hours notice, from her childhood and college, from all parts and decades of my life and my parents’, from my husband’s poker game, for God’s sake, from Mexico and Israel and Spain and England and even South Dakota.

I took in every screen, every square, every face, some gathered in groups around the glow. The temple’s women’s a cappella group (The Jew-el Tones, obviously) played a recording of “Java Jive” with a solo by my mom. A high school bestie of mine did a hilarious spoken word performance about all the times mom caught us lying. A cantor friend sang a sublime impromptu “Over the Rainbow.” Mom’s only niece let out unscripted pain and tears, messy, raw, and true. We heard stories we’d never heard, about mom’s wisecracks, precocity, and acts of kindness transformative for others but for her, apparently, just Tuesday.

Everyone who asked got to share, and everyone got to hear. Everyone’s brushes added to the canvas—an opera anecdote, good advice taken (“bring cookies to college and you’ll make friends on day one”), of course a bit of the Holocaust—creating in one hour, three nights in a row, my new favorite picture of my mom.

All with zero setup. Dad and I cleaned nothing. I wore nice tops and cool beads dropped off in the driveway by a dear friend, paired with loose quarantine jeans and definitely no shoes. There were no well-meaning strangers opening our fridge or fanning out napkins. No piles of untouched crudites with some dumb dip. No big borrowed coffee urn. No dissonant laughter or exhausting chit-chat. No one not talking about my mom. And when the shiva ended, my dad and I clicked “Leave meeting,” looked at each other and around the empty house, and went to bed.

Of course, stuff went wrong and things were missed. My mother—a devoted musician and synagogue macher—deserves her damn overflow funeral with choirs of angels and extra cops for the traffic. As we know, you cannot sing on Zoom. At the first shiva, my laptop froze before Kaddish and, since restarting would end the meeting, I had to go stand and pray a few feet behind my dad, mask on, like some sort of hovering wraith. Yeah, that was tense.

Your mileage (God forbid) may vary, of course. I’m lucky to live in a world full of talented artists, intuitive clergy, and people who can tell a joke. The circumstances of mom’s death were cruel in the way of today, but her life was well- and long enough-lived that shiva allowed for celebration.

I’m also not saying that Zoom everything is the best everything. Unless you’re the type who’d do City Hall anyway, probably weddings are best IRL. And you kids deserve to sit in the sea of your fellow graduates and throw your mortarboards into the actual sky.

But while we’re rethinking work and commutes and What Really Matters, I say: let’s also rethink shiva. When we can gather in full flesh and babka, maybe we do both that and manage, very intentionally, the live sharing of memories, in our homes and online. If chatter and platters feel cumbersome, not comforting, maybe we just…don’t.

Ha makom yinachem etchem b’toch sha’ar avlei tzion v’rushalayim. That’s traditionally what you say when greeting a mourner. May God console you among those who mourn in Zion and Jerusalem. Here, God is written as “the place.” Today, in the day of Zoom shiva, that place is everywhere.

‘Zoom shiva is shiva distilled to its essence’