Protection in a pandemic: “Nothing bad can happen to you when you are wearing a hamsa” 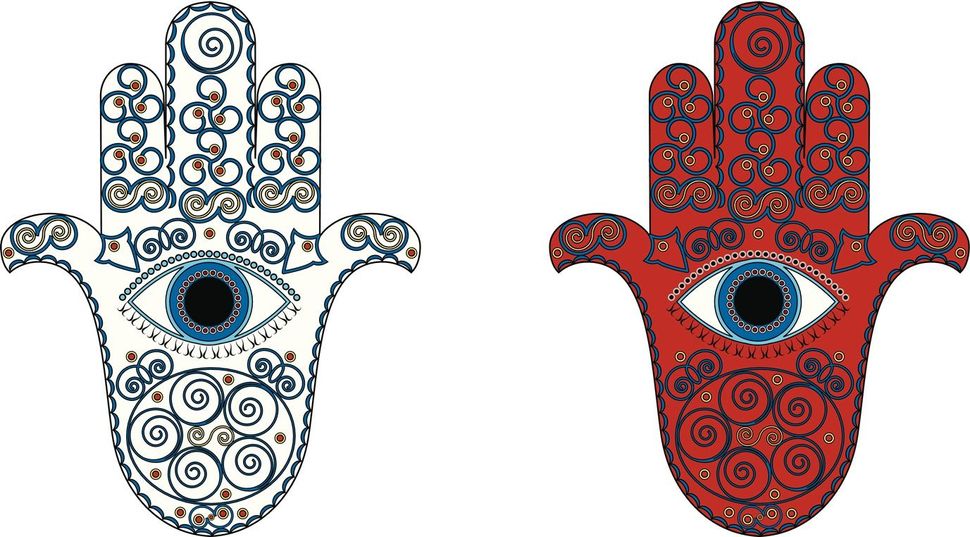 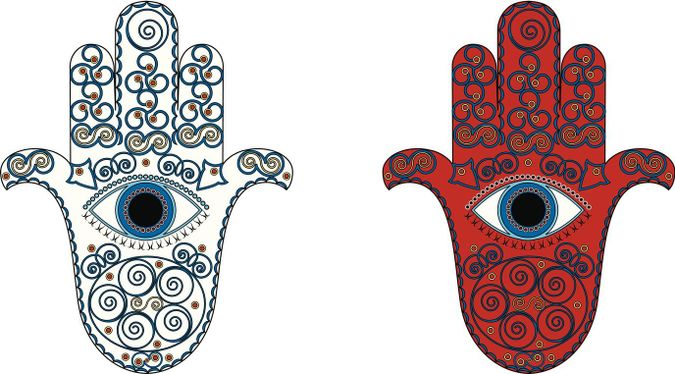 “It was the best of times; it was the worst of times!” Oddly enough it was a man that coined that phrase, but it is the women bearing children that bid it true. After all, what is more of a contradiction than the careful nurturing of a tiny being inside you for 9 months, with the harsh pain and anguish of delivering it into the world?

When my daughter Carrie and her husband Meir announced her pregnancy in September 2019, my husband and I couldn’t be more delighted. Her first child, our first grandchild — life was good! She took care of herself: eating right, exercising, taking prenatal vitamins, and we sat back and waited for May 28, 2020 to come. Unfortunately, February would come first, and bring with it the coronavirus. Commuting into NYC everyday on NJ Transit, and taking the city subway system caused us worry, but the doctors were not alarmed and didn’t recommend any changes to her schedule. The month went by in a blink, and March was upon us. The stories out of China regarding the virus worsened, and the cases in Washington State sent the nation into a frenzy. By March 13th, we in New York and New Jersey were headed towards a lock down.

Carrie and Meir took it like the rest of us: working 12 hour days, taking walks in the evening, they planned for their baby. Carrie joined online support groups and chatted with friends that had recently given birth. As I watched the efforts she made to form a community, I realized how different this was from my own first birth experience. I went to an office every day, where there were plenty of working mothers to talk to. I met friends for coffee, where we discussed pediatricians and the size of baby clothes, and I went to Lamaze classes where a nurse calmed our fears and told us what to expect. I shopped in stores for my stroller, car seat, and crib — where every sales person was an expert on labor and had a story to tell. I did not order from Amazon alone in my house. It was very communal and supportive — the way it was supposed to be, the way it has been since biblical times — but not for her.

It was early May when Carrie learned her baby was not gaining the weight they wanted, so it was decided she would be induced. I saw her a few days before going to the hospital; she looked so scared. When I asked how she was doing, she asked, “How am I going to bring a baby into a world like this?”

What could I do in this world of quarantine to lift Carrie’s spirits? How could I help her to feel safe? How could I provide her with the supportive community of women sharing about childbirth, like I enjoyed, when she was isolated? How could I give her a community in a time when we were to refrain from seeing others?

Then it came to me: the hamsa. When Carrie was a little girl she saw a scary movie that kept her awake late into the night. Determined to defeat those nightmares and get some rest myself, I took my hamsa off my neck and put it on hers. I explained that the hamsa has magical powers and keeps away all evil. “Nothing bad can happen to you when you are wearing a hamsa,” I said, and she believed me. As if by magic, she was lulled to sleep. She wore that necklace for months, till eventually it fell from her neck and was lost.

Years later, she would buy me a new hamsa, but until May 12th, it sat in a box in a drawer. As she prepared for the hospital, I discovered the hamsa, put it on, and took a picture of myself. I sent it to Carrie with the note “I’m wearing the hamsa. You are protected. It’s keeping away the Evil Eye, and all will be well.” That is how it all started.

I contacted women that were part of my own community. I told the story of the scary movie and Carrie’s little-girl belief that an amulet on a string could protect her. I sent my picture as a sample, and asked them to do the same. Everyone was happy to participate. Hannah, my son’s fiancée, enlarged the circle, telling me to reach out to “everyone.” 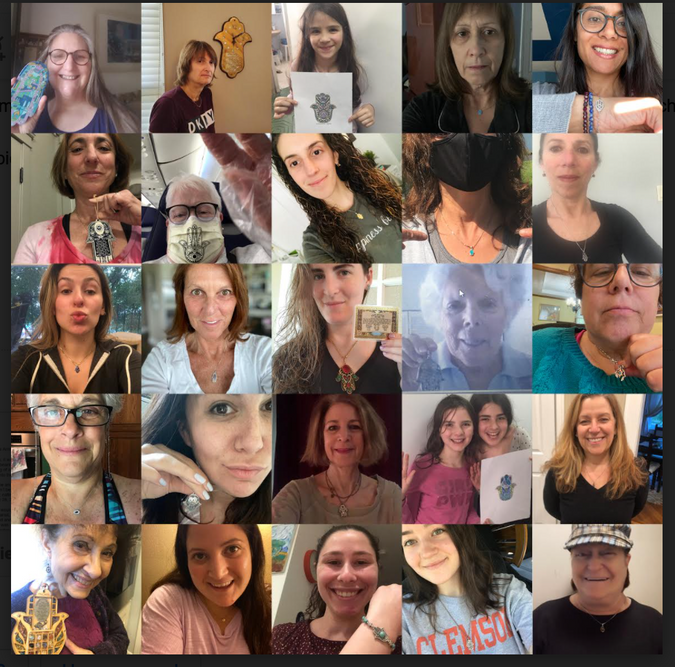 The hamsa army. Image by Courtesy of the Author

So everyone it became, or at least everyone with a hamsa. College friends, childhood friends, camp friends, work buddies, cousins, neighbors, old teachers – everyone was happy to do it. The pictures started to roll in, and Carrie’s spirits lifted.

By the time she arrived at the hospital on May 14th, she had received over 20 pictures and messages of support. Her husband took a picture as they approached the hospital; she looked happy and excited. Under the picture was the message “Thanks for sending me a hamsa army.”

Throughout her labor, the hamsa pictures continued to be sent. I believe the power of the charm, combined with the bonds of sisterhood, gave her strength. She rose to the challenge and delivered a beautiful baby girl in this unprecedented time of COVID-19.

Women of ancient times lived with plague and disease, so their sisters rallied to provide support, both physical and emotional. The community of motherhood is so important — now more than ever.

What is a hamsa?

The hamsa is an ancient Middle Eastern amulet that people believed protected them from harm against evil forces, named for the 5 fingers it depicts, which are open and hold an eye. Folklore associates the hand with Fatima (Muhammad’s daughter) in Islam, and Miriam (Mose’s sister) in Judaism. It is a respected symbol in both cultures that continues to represent protection to those who wear it, as well as blessings, power and strength.

Jody Nestel is a middle school teacher living in Princeton Junction, New Jersey, where she and her husband have raised 3 children.

Protection in a pandemic: “Nothing bad can happen to you when you are wearing a hamsa”