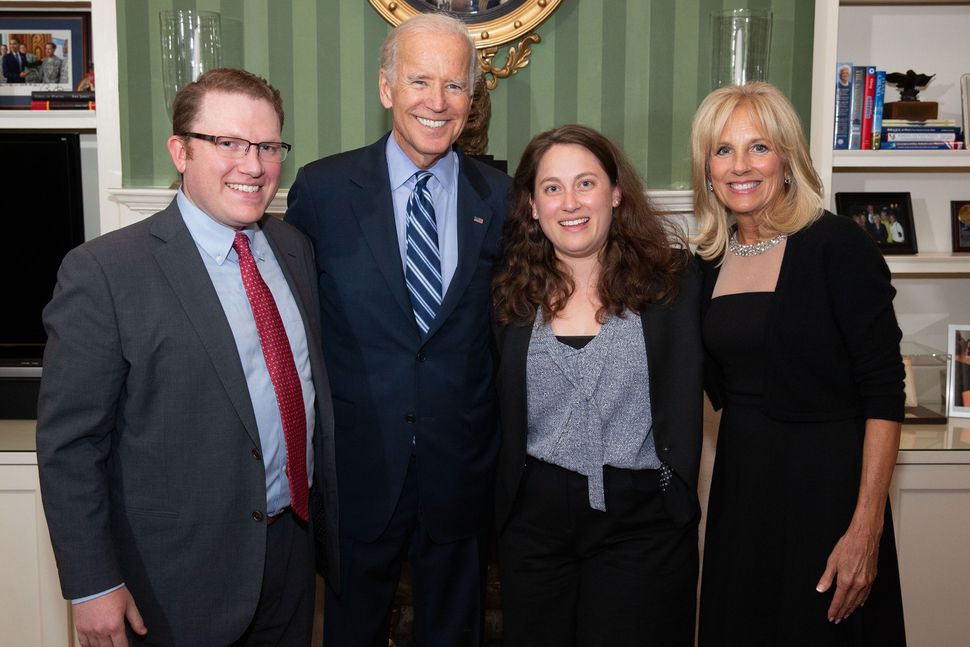 I lost my business partner last week, but for a good cause. Aaron Keyak is now Jewish Engagement Director for Vice President Joe Biden’s presidential campaign. His sh’liach to the Yidden, if you will. The campaign could not have picked a better person.

Aaron and Bluelight Strategies, the Washington public-affairs firm we co-founded in 2014, have worked for much of the Jewish world, including the Conservative movement, Magen David Adom, BBYO, American Jewish Committee, Israel Policy Forum, the Conference of Presidents of Major American Jewish Organizations and Jewish Federations of North America.

We also ran a more than $500,000 independent-expenditure campaign on behalf of President Obama’s reelection eight years ago – the so-called Jewish media “Hub” – and a nearly $1 million Super PAC in support of Hillary Clinton in 2016. That year, the Democratic vote dropped from 2012 in every core constituency group except Jews, where exit showed it actually increased 2%. These campaigns reached American Jewish voters in a few states with highly targeted email, online and social media ads, videos and online games, news stories and op-eds, rapid response, live and recorded phone calls, and a sophisticated use of direct mail the community had not previously seen.

Legally – and frustratingly – Aaron and I are now prohibited from discussing anything substantial about the campaign, even this article, in case I run an independent-expenditure for Biden. But if you want a clue how Aaron is going to run his part of the broader Biden “coalitions” operation, you can look at what we did four and eight years ago during similar campaigns. If the funding is there, there is no doubt Aaron has the vision to both create the program necessary to persuade the few undecided American Jews there are among us in the Age of Trump and to turn out all of us to vote. Especially with the added resources and kavod of the campaign itself.

Before co-founding Bluelight, Aaron worked on Capitol Hill, as communications director and Middle East policy advisor to Rep. Jerry Nadler, Democrat of New York, who represented the highest percentage of Jewish Americans in the United States and is.now chair of the House Judiciary Committee. In 2014, Aaron spearheaded the drafting, coalition-building and legislative negotiations surrounding a timely congressional resolution condemning the rising tide of antisemitism, which passed the House unanimously.

“I trusted Aaron’s advice on strategy and policy both for my campaign and for my official House duties,” Nadler said in a statement. “From the finer nuances of Middle East policy to understanding that the Jewish community is no monolith, we have long benefited greatly from Aaron’s good counsel. Vice President Biden and his campaign could not have found a better person to serve in this role during these unprecedented times.”

He also worked for former Rep. Steve Rothman, a New Jersey Democrat — including on a multimillion-dollar, nationally targeted primary campaign. When he started with Congressman Rothman, Aaron was the youngest communications director on Capitol Hill. He led the messaging, press and political strategy in support of Rothman’s early championing of Israel’s lifesaving defense program, Iron Dome, as well as the congressman’s outspoken advocacy for U.S.-Israel joint missile defense programs, David’s Sling, Arrow 2 and Arrow 3.

When Aaron was interim executive director of the old National Jewish Democratic Council, The Hill recognized him as one of the top political pundits on Twitter, and JTA named him a leader in “steering conversation about Jewish life on Twitter.” (Follow him @akeyak.)

And Aaron and I, along with Marc Stanley, a Dallas lawyer, former Rep. Ron Klein of Florida and the veteran Democratic political fundraiser Fran Katz Watson, founded the Jewish Democratic Council of America in 2017.

Aaron and I had already been volunteering for the Biden campaign – as much as the law allowed – doing research on issues of interest to the Jewish community, briefing and backgrounding reporters, writing and ghostwriting op-eds and raising a few dollars. We were both co-hosts of the Biden Fireside Chat with American Jews early last month, featuring Dan Shapiro, Obama’s ambassador to Israel, and noted Holocaust historian Deborah Lipstadt. The event drew 560 people on Zoom and raised more than $1 million. Aaron is still a lay member of the Biden National Finance Committee, something unusual for a full-time staffer.

And we have been working with Jews for Biden grassroots organizations in five states — Florida, Michigan, Pennsylvania, Wisconsin and Georgia — as well as the national Jews4Joe. Watch next week for Biden buttons and stickers in Hebrew.

Biden and his campaign could not have found a more talented, knowledgeable and motivated person sh’liach – emissary – to American Jewish voters than Aaron Keyak. Aaron is an experienced publicist and a leader in fighting for both the progressive and pro-Israel communities, in political campaigns as well as on Capitol Hill. He has already done this work twice before, working in parallel with the official campaign staffs for Obama in 2012 and Clinton in 2016. All I can say is watch out, Donald supposedly-good-for-the-Jews Trump – you’re in for a world of tsuris. Aaron is not just whip smart and strategic; he’s creative and energetic.

Take “The Hub” for example. Aaron converted our old office near the National Zoo and turned its attic into a full-time campaign operation with staff and volunteers — who could only stand up straight if they positioned their heads between the rafters.

Aaron Keyak grew up modern Orthodox in San Francisco and enjoys quite the political family yichus, or pedigree. His grandfather headed the California Democratic Party, his mother co-founded the Raoul Wallenberg Jewish Democratic Club of San Francisco, and his late father z”l served as president of Congregation Adath Israel in San Francisco.

Aaron attended Washington University in St. Louis, where he met his wife, Avigail Goldgraber. They now live in the West End neighborhood of Washington, D.C. with their 3-year-old daughter, Shira, and are active in Kesher Israel, the Georgetown Synagogue. Aaron is also a Truman National Security Project scholar, trained in defense, foreign policy and national security issues.

He remains loyal to Jewish observance, the Giants, 49’ers and Golden State Warriors (whose name may need to change soon), and to Democratic victory in 2020.

Steve Rabinowitz is president and CEO of Bluelight Strategies, and worked on the national staffs of nine U.S. presidential campaigns as well as the Clinton White House staff. Follow him on Twitter @steverabinowitz