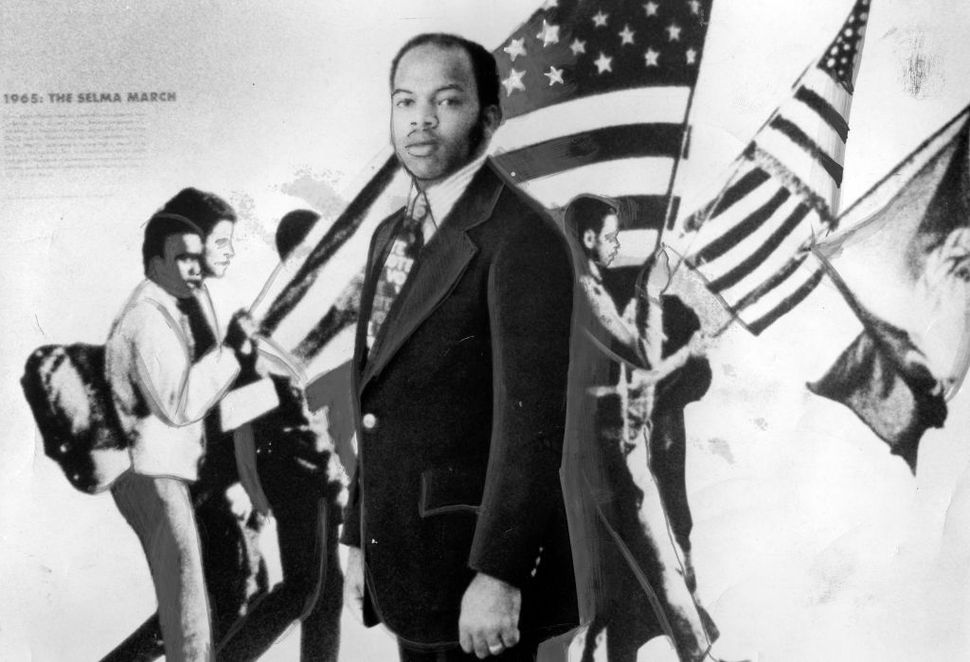 John Lewis, standing in front of an exhibit commemorating events in the struggle for the Right to Vote, at the Smithsonian Institution, in 1972, Washington, DC, October 19, 1972. Image by Getty Images

It’s Tisha B’av – the darkest day in the Jewish calendar.

We remember the destruction. We mourn the loss of the First and Second Temples. We recall Crusades and pogroms that happened on this same day in years gone by.

And each year, after the fasting and the mourning of Tisha B’av, comes Shabbat. This one is a time of hope known as Shabbat Nachamu – the Sabbath of Consolation.

The Haftarah portion we read is taken from the Book of Isaiah and begins:

The message is particularly apt for this moment – this Tisha B’av and Shabbat Nachamu in the time of a global pandemic that includes so much loss, so much destruction: over 150,000 American lives lost so far. Six hundred and fifty thousand deaths worldwide. Economies in tatters – unemployment on the rise. People on the verge of losing their homes.

Add to this pain the anger and outrage we feel about racial injustice here in America and around the world. Unrest in our cities and genuine fear about our government’s response. Antisemitism that troubles us deeply but is ignored by so many others.

So much sadness. So much destruction.

Extraordinarily and beautifully, the prophet Isaiah writing more than 2,500 years ago, suggests that in moments like these, God wants us to be comforted. God wants us to hold on to hope and to believe in the possibility of repair, of renewal.

And make no mistake: This is a very adult, mature type of courage for we know all too well the dark and terrible things that life can do to us. We know – all too well – how unpredictable and fleeting life can be. And yet – with that knowledge before us – we have a faith that somehow, someway, we will get through it. Somehow, someway, destruction will lead to repair.

It’s a powerful and important lesson for these dark days – even as we acknowledge with open eyes the magnitude of the destruction, we hold onto hope.

We remember the loss year after year and then – come Shabbat – we remind ourselves that we will get through it, as generations of our ancestors before us have.

On this Shabbat Nachamu – this Shabbat of Comfort and Consolation – I want to share a few strategies for holding on to hope in the wake of loss and destruction. And, given the moment we find ourselves in right now, I’ll share them in the name and through the example of a great American hero who died two weeks ago and who we mourn as a nation – Representative John Lewis.

Lewis was an extraordinary civil rights leader and public servant. He was among the original 13 Freedom Riders who challenged segregated interstate travel in the South in 1961. He was a founder of the Student Nonviolent Coordinating Committee which started the lunch-counter sit-ins. He helped organize the 1963 March on Washington and was the last surviving speaker from that historic moment.

Because of his leadership – because he held on to hope – restrooms, hotels, restaurants, parks and pools were ultimately desegregated in the South.

And all of this positive change, the things he did to bring healing to our nation, his actions focused on rebuilding that which was broken – well they came with a steep price.

He was arrested 40 times from 1960-1966 in nonviolent protests. He was spat upon and burned with cigarettes by angry mobs.

He was repeatedly beaten senseless by police officers. During the Freedom Rides of 1961, he was left unconscious in a pool of his own blood at a bus terminal in Alabama and – most famously in Selma in March of 1965 – almost killed by law enforcement. On that day which came to be known as “Bloody Sunday,” Lewis’ skull was fractured by an Alabama state trooper.

So the first lesson is that to rebuild in the wake of destruction, we sometimes need to fight. Holy, sacred battles for what is right, for justice, for all that is good. As Lewis put it: “I have been in some kind of fight — for freedom, equality, basic human rights — for nearly my entire life.”

But we don’t have to fight alone – and this is the second lesson. We have friends and we have allies who will stand with us. For Lewis, those allies were often members of our own Jewish community. He built bridges and formed alliances with Jewish groups from the very beginning.

That day in Selma, Lewis and Dr. King marched with Rabbi Abraham Joshua Heschel. In 1982, Lewis partnered with the American Jewish Committee to found the Atlanta Black-Jewish Coalition. This led over time to the creation of the Congressional Black-Jewish Caucus.

In 1987, Lewis joined in the protests to free Soviet Jewry. And I want you now to hear the words he spoke at a rally in Washington that same year:

“I stand here not so much as a member of Congress but I stand here as a human being,” Lewis said. “Almost 25 years ago I participated in a march here for jobs and freedom. Hundreds and thousands of members of the Jewish community marched with us then. I think it’s fitting for me to be with you today. Our message – the message of the black community is one that is very simple. We’re saying to president Reagan – Mr. President, tell Mr. Gorbachev to open the doors, open the gates and let the people out. I said and as long as one Jew is denied the right to emigrate, as long as one Jew is denied the right to be Jewish in the Soviet Union, we all are Jews in the Soviet Union.”

He stood with his friends throughout his career – even when it was difficult and costly politically. In 1995, Representative Lewis publicly rebuked Louis Farrakhan for his antisemitic vitriol.

And while sometimes critical of specific Israeli governmental policies and actions, he remained a loyal friend of Israel throughout his career.

And Israeli officials joined leaders from around the world mourning Lewis this week – Dani Dayan, the outgoing consul general of Israel in New York wrote: “The US lost a hero. Israel lost a friend.”

The final lesson: never, ever give up.

Lewis could have quit any number of times for understandable reasons. One skull fracture would be enough for most of us. A few nights in jail for a cause you believe in – dayeinu. How many setbacks? How many years of toil would be enough to convince most of us to change focus, to shift gears, to quietly give up?

He first ran for office in 1977 – and lost. He suffered many setbacks throughout his life and just kept fighting for what he believed was right.

“Do not get lost in a sea of despair. Be hopeful, be optimistic. Our struggle is not the struggle of a day, a week, a month, or a year, it is the struggle of a lifetime. Never, ever be afraid to make some noise and get in good trouble, necessary trouble.”

We fight. We join with allies, with friends who will help us on the way. And we never, ever give up.

May all those who struggled to survive, to hold onto hope – our ancestors as well as the righteous from amongst the nations – may all those who toiled to rebuild, may the ones who kept on fighting, the ones who got in “good trouble” for a higher purpose – may their memories forever be for a blessing and may they rest in peace.

And this above all: may we, the living, find strength, inspiration, and comfort in their example.

Yoshi Zweiback is the Senior Rabbi at the Stephen Wise Temple and Schools.