This Tisha B’Av, the Hagia Sophia teaches us about reclaiming sacred spaces 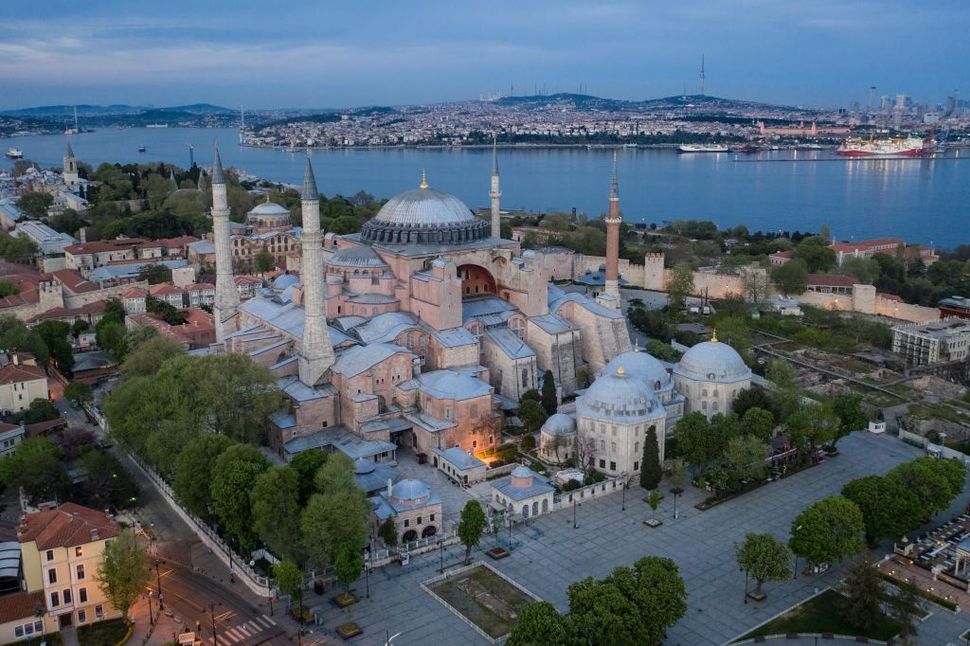 An aerial view of the Hagia Sophia, empty during coronavirus. Image by Getty Images

When the Roman Emperor, Justinian I, dedicated Istanbul’s Hagia Sophia as a cathedral, he is said to have proclaimed, “Solomon, I have surpassed thee.” Indeed, the church-turned mosque-turned museum is an architectural wonder of the world, a gem that inspires devotion.

Understandably, therefore, faithful Muslims were distraught when in 1934 Ataturk secularized the mosque. How painful it must have been to see it serve as a “mere” museum. It was an ongoing reminder of their subjugation and victimization. Finally, last Friday, their prayers were answered when worship returned to Hagia Sophia.

Putting aside President Erdogan’s political motivation to rededicate the mosque, the story holds particular interest for us today. As Jews approaching Tisha B’Av, exiled from our Temple and from our synagogues, we ask: What is the value of sacred space?

A recent Jewish tour of Jewish Spain and the upcoming holiday point to answers.

Standing in front of a small neighborhood church in Granada, my synagogue’s tour guide directed our attention to the right of the entrance. It was a sunken area with an arch in the wall and a drain in the floor. “Anyone know what it is” he asked? After a moment it was clear we were stumped. Our guide explained that this was a place to wash in preparation for prayer- a clear indication that the church was once a mosque. A detail we might have overlooked revealed a complicated past.

Throughout the trip, we saw a similar pattern. In Seville, the placement of an upper window hinted that a church was once a synagogue. In Cordoba, Moorish columns surrounding a Renaissance nave were a clear give-away that the exquisite Mezquite was a church built inside an earlier mosque.

Architectural features like these are presented as a sign of cultural harmony that swept the Iberian Peninsula in the middle ages. Gift shops sell ceramic tiles painted with crosses, crescents and Stars of David to highlight the country’s multi-ethnic heritage. But eclectic building styles and “co-exist” postcards belie a discordant past.

It was not called “Reconquista” (re-conquest) for nothing. This was architectural supercessionism indicating the displacement of a population and the disdain of a faith. Walking through these sacred sites, I couldn’t help but wonder, what was the craftsman thinking as he “converted” a synagogue into a church or a church into a mosque? What did the worshipper think as she walked past a washing station or a Hebrew inscription on her way to pray? Did she humbly honor those who came before her? Did his heart swell with pride, proclaiming his ascension?

Tisha B’Av offers an important corrective to the pull of religious triumphalism. On this day, we mourn the loss of our Temple. We recall its destruction and pray for its restoration. For political reasons, I object to attempts by radical Jewish groups to pray on the Temple mount. For theological reasons, I have no desire to return to Temple worship of sacrifices. But I understand the longing, the desire to reclaim what was taken from us. I understand the power of certain places to inspire prayer.

Enter King Solomon to warn us against turning a sanctuary into an idol. Upon completing the building of the Temple in Jerusalem, with humility and with hagia sophia (holy wisdom), he asked, “But will God really dwell on earth? Even the heavens to their uttermost reaches cannot contain You, how much less this House that I have built! “ (1 Kings 8:27).

When we mourn the loss of sacred spaces and especially when we reclaim them, we do so knowing that God dwells not in a building but in the heart of the faithful. “Renew our days,” is not a call to rebuild the Temple but “Return us unto You,” God.

This Tisha B’Av, the Hagia Sophia teaches us about reclaiming sacred spaces