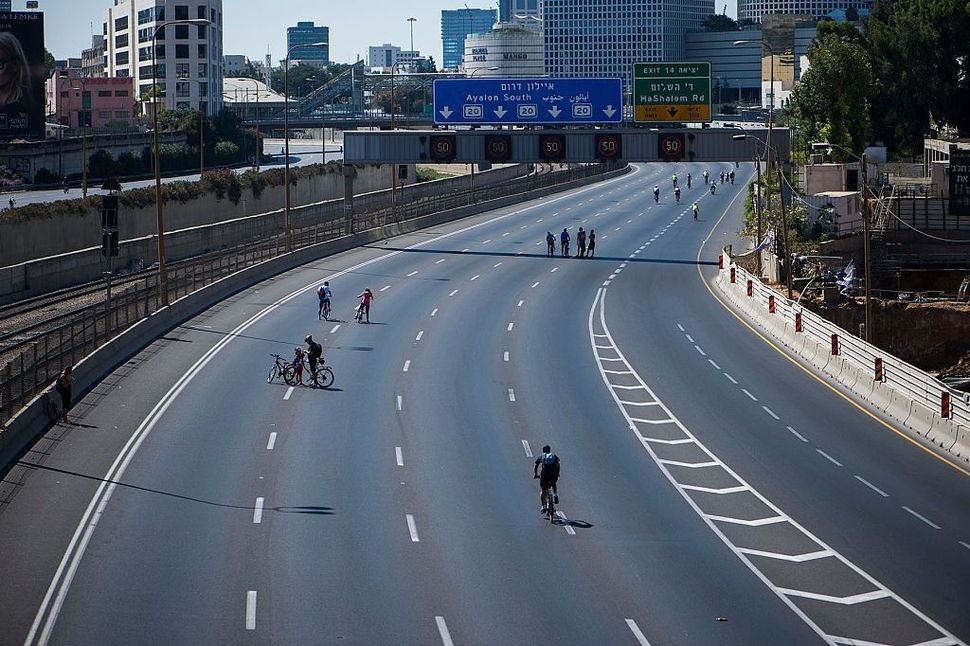 Cyclists in the Tel Aviv streets on Yom Kippur in 2014. Image by Getty Images

Thousands of years ago the central practice of Yom Kippur involved two goats.

These goats would be taken by the high priest who would draw lots to decide which one would be immediately sacrificed in the Jerusalem temple and which one would be led out into the desert only to be pushed off a cliff – symbolically representing the destruction of the community’s sins (why yes, this is the origin of the term “scapegoat”). The high priest would take the blood of the first goat and sprinkle it on the corners of the altar with his bare hands.

A few weeks ago, my friend and teacher Lauren Cohen Fischer put together a source sheet about how to pinpoint “authentic Jewish practice” for a new educational series run by Hillel International. The case study focused on the great Yom Kippur bike debate in Tel-Aviv that proliferated throughout the Jewish world a couple years back.

On Yom Kippur, in normally traffic-ridden Tel-Aviv, the streets are empty and normal life comes to a halt. Sure, many use this day off to attend synagogue and fast – but a more recent trend involves thousands of people using the opportunity to bike down major streets now devoid of cars. It has become a yearly Yom Kippur tradition that many young Israelies view as the major practice of the holiday.

The question is, of course, could biking on Yom Kippur be viewed as authentic Jewish practice?

I brought this question to a group of students where I encountered the spectrum of opinions that one would expect from any slice of the Jewish people. “If this is what allows people to connect, then why not!” one opined. “This has nothing to do with Yom Kippur or Judaism,” another interjected. “Wait, what does authentic Jewish practice even mean and who gets to decide?” another student asked, throwing the question back in my face.

Towards the end of the discussion, taking advantage of possibly the only good part of having to teach over Zoom, I shared my screen and went to YouTube.

I shared a video of the Samaritans, an early breakoff group from the Israelites, who still, to this day, sacrifice a Pascal lamb every year on Passover. Watching the sacrifice, one can’t help but admit that this is the closest to a biblical holiday practice that exists in the modern world. Yet, when I asked my original question: “Is this authentic Jewish practice?” there was a moment of introspective science while a vivid scene of a slaughtered lamb being carried down a mountain dominated the screen.

Judaism is a constant dance, a dialectic if you will, between tradition and evolution. Choose only the former and you are at risk of becoming obsolete while the Jewish tradition has moved on. Choose only the later and you are at equal risk. A boat can only move downstream so fast while it ensures its own safety. You can capsize, or lose control, or even have your passengers opt to leave for a safer (or more traditional) boat.

One can imagine a scene in an 6th century Galilean synagogue where a young rabbi, upon noticing that his congregants failed to be fully inspired by the Mussaf recounting of the Yom Kippur sacrificial service, decided to supplement his service with a newly written poem about the importance of the day.

As the rabbi starts to chant this piyut, called Unetanu Tokef, the elders begin to protest. “How dare this rabbi try and change the structure of our services!” they grumble in the back, a few actually leaving to the next synagogue down the street.

Being completely honest, I find the ritual sacrifice of animals archaic and unethical and I’m certainly glad Judaism has evolved. I also find the idea of biking as a Yom Kippur ritual to be lacking in honor or respect for the day, and severed from any traditional Jewish practice.

I can certainly understand why one would want to base their Yom Kippur around the sacrificial service, as we know that the Musaf service, the traditional centerpiece of the day does in its nod to thousands of years of practice. I can also certainly understand how an introspective bike ride down an empty freeway can be a moment of spirituality and connection for which a synagogue service centered around an out-of-date theology simply can’t compete.

But perhaps that’s the point.

There was always a time when every authentic Jewish practice was radical and innovative for its time. The question we must be asking ourselves, especially given the fast pace that the world is moving around us, is how to balance and ensure a healthy synthesis and continuation of both innovation and tradition.

Moshe Daniel Levine is the Senior Jewish Educator at OC Hillel and a Rabbinic fellow at Temple Beth Tikvah. You can read more of his writing here. He can be reached at [email protected]