Why I’m risking a $15,000 fine by hosting a yeshiva in our basement 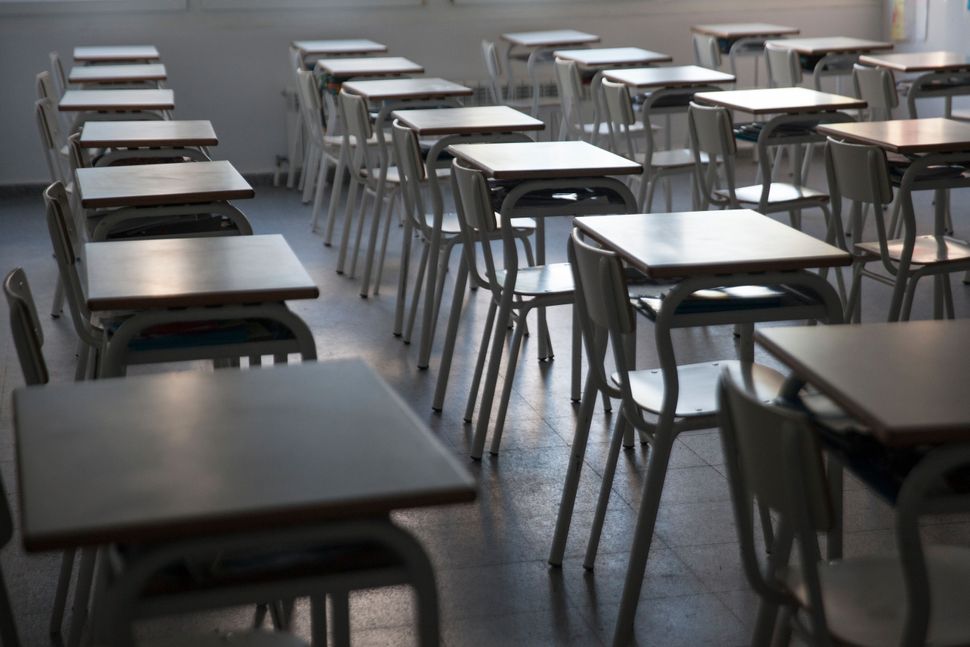 Editor’s note: The author of this essay insisted on anonymity, and that his neighborhood not be specified, because he is violating city and state social-distancing guidelines and risking a hefty fine. We nonetheless felt the piece was important and interesting enough to deepen readers’ understanding.

Sounds of Shema Yisrael reverberated through my house, keeping my 18-month-old from taking her scheduled nap. Usually, this would annoy me, but the voices of 27 fifth-grade boys chanting on top of their lungs made me emotional: my 11-year-old son’s voice was among them, and he had been neglecting his prayers during this pandemic.

Suddenly the rebbe cried out that someone turned on the washing machine, and my wife had to run down to the basement to turn it off. She returned with a slightly horrified description of lunchboxes on the floor, some drinks spilled, and new pen marks scribbled along the walls.

A few days before, I had shlepped our furniture from the play area to the back room and set up tables and chairs to fit all the children into this makeshift classroom. It is a little squishy, and we can’t do laundry from when they arrive at 9:30 a.m. until they leave at 4 p.m., but we are thrilled that my son and his 5-year-old sister, who goes to someone’s else’s basement, are with their friends and they are davening and learning Torah.

The religious aspect of their upbringing has suffered dramatically since March, when yeshivas in our Orthodox neighborhood were shut down along with schools across New York City. This seven-month layoff has been more than trying for my children. Not having a schedule and the inability to socialize with their friends have taken their toll: the kids have become somewhat anti-social and have battled bouts of depression. Their religious observance has also suffered.

For example, shacharis, the morning prayers, is a pivotal part of our day. With synagogues and yeshivas closed, the kids had nothing to drive them to get up in time. My wife and I are freelance teachers, so we have lost most of our income, but the hardest part of the pandemic has been to watch our kids struggle and feel unable to do anything to help.

When the yeshivas reopened in September, I was — perhaps naively — very hopeful that things would go back to normal. The restart, however, was anything but smooth. After such a long time off, they did not readjust quickly — I could barely rip them out of bed in time for school, and they’d barely mumble the prayers before they ran out of the house to make it in time for class. Not learning for so long has also hindered their education. They are months behind where they should be.

But at least they were starting to improve. So I was devastated when Gov. Andrew Cuomo announced earlier this month that he was shutting down schools in our neighborhood and others across New York that saw a spike in cases of Covid-19. The mere thought of seeing my children lose all the ground they had made up made me want to vomit.

Governor Cuomo said then that the shutdown would last two weeks and then he would reassess the situation. But that time period didn’t seem realistic, especially after the governor and mayor kept publically clashing with the Orthodox community. Another prolonged shutdown was inconceivable to us.

Thankfully, our schools did not simply accept Cuomo’s edict. Our rabbis and principals understand that remote-learning does not work, and that children not only struggle with Judaism when not in yeshiva, but their mental health suffers as well. They decided to set up classrooms in people’s homes so as not to deprive our children of the education and social contact they so badly need and long for. My wife and I quickly offered our basement to my son’s grade.

While this may sound radical, the risk of young children spreading Covid-19 feels negligible compared to the severe health risks of keeping them out of school. We took safety precautions, putting plexiglass dividers between each desk, and making masks mandatory.

We are doing this because there is nothing more important to us as Jewish parents than bringing up our children the way the Torah describes it. I still remember when my son first learned to recite Modeh Ani, the prayer we say when we first wake up, on his own. I felt an enormous sense of pride and accomplishment even though he was simply repeating a single sentence that he had heard every day since he was born.

My wife and I are law-abiding citizens who pay taxes on all our cash income. Now we feel like fugitives. When the children arrive at our house, we rush them through our side door so that they shouldn’t and risk being noticed. Every time the doorbell rings, my heart drops, and I run to check if it is the police or some other government official at the door.

We keep some full garbage bags in the house because I am afraid someone will get suspicious about how much more trash we’re producing. I really can’t afford the $15,000 fine that we are risking, especially with our income-source in limbo.

But our teachings mean more to us than money. Even if they raid my home, shut down our makeshift classroom, and make me pay a hefty fine, I would be content knowing that what we did is best for children’s spiritual, mental and physical health.

If the fine were enough of a deterrent for us not to attempt to educate our children the Torah way, we might as well keep our institutions closed after the coronavirus.

Why I’m risking a $15,000 fine by hosting a yeshiva in our basement