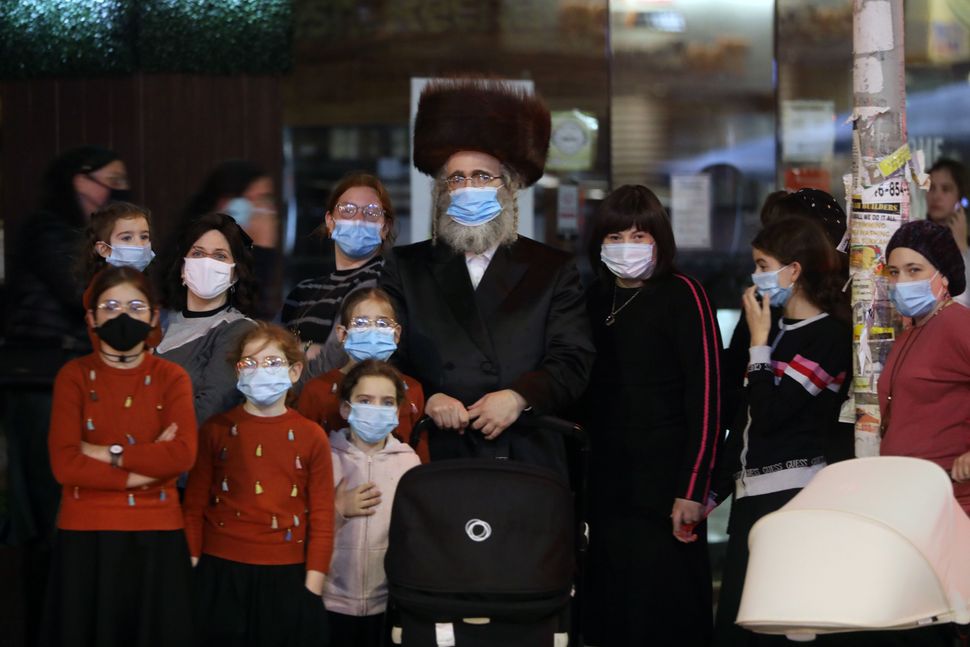 NEW YORK, NEW YORK - OCTOBER 07: A family watches as groups of protesters gather in the Brooklyn neighborhood of Borough Park to denounce lockdowns of their neighborhood due to a spike in COVID-19 cases on October 07, 2020 in New York City. Borough Park is one of numerous Brooklyn neighborhoods that are witnessing a rising number of COVID-19 cases as New York City continues to trend down to around a one percent overall infection rate. Many of the neighborhoods experiencing a spike in cases are Orthodox Jewish neighborhoods which have had issues with authorities in limiting large funerals and weddings. New York City Mayor Bill de Blasio has announced plans to close nonessential businesses and schools in nine neighborhoods where positive COVID-19 rates have been higher than 3 percent. (Photo by Spencer Platt/Getty Images) Image by Spencer Platt/Getty Images

“How,” she asked, “can we ignore the compelling state interest in protecting the health and life of all New Yorkers?”

Of course we can’t. But the objections that a coalition of Orthodox groups including Agudath Israel, where I am director of public affairs, had raised about the new rules were not that the state lacked a compelling interest. It was that the rules themselves were unfair and illogical.

For instance, while a percentage-of-room-capacity limit on worshippers makes sense, a rule forbidding a house of worship of any size to contain more than 10 people defies reason. (The $15,000-a-day fine also feels excessive.)

It also makes no sense to reach conclusions about a community’s infection rate without analyzing how widespread testing is in that community. The city’s own data show that some Orthodox neighborhoods, including Borough Park, have testing rates below the city’s average. Many people in child-rich Orthodox neighborhoods, particularly during a busy holiday season, only took the time to be tested if they were experiencing clear symptoms — maybe that accounts for a higher “positivity rate” than in places where testing is done more routinely.

The governor could have avoided much pain by sincerely engaging, in good faith, with the Orthodox community’s leaders.

But, as Yair Rosenberg wrote in Tablet Magazine, “Rather than engaging with these communities as equals,” authorities attempted “to bludgeon them into compliance through blunt-force measures.”

What offended me even more than the heavy-handed and misguided gubernatorial diktat itself was a letter released shortly before the hearing of our lawsuit.

It was from a group formed earlier this year called the New York Jewish Agenda. Its website identifies it as “a network of leaders working to elevate the voice of Jewish community leaders whose shared values motivate them to promote social justice, combat antisemitism, and support a democratic vision of Israel.”

**Say l’chaim with The Forward at our Come As You Are gala! Join us for a virtual evening of comedy and cocktails in challenging times, this Tuesday October 19th at 8:30 ET. **

The letter was signed by several hundred rabbis and Jewish community leaders, the vast majority of them non-Orthodox, and offered a lengthy homily based on Jewish sources and Jewish history about the value of life. All as a foreword to praise Cuomo and Mayor Bill de Blasio “for using data-driven, geographically-based efforts to contain the spread of COVID-19.”

It also declared that “the posturing of religious freedom in opposition to the wellbeing of individuals and communities is blasphemy.”

Those of us who objected to Cuomo’s surprise 10-person limit were not “posturing.” Nor were we pitting religious freedom against people’s wellbeing. We were standing up for the legitimate rights of religious American citizens residing in Brooklyn.

If anything is blasphemous here, it is a group of people, most of whom do not follow traditional Jewish law, or halacha, name-calling a community that does. The signers of this letter may have no qualms Zooming services on the Sabbath or Jewish holidays — or driving to distant places of worship — but the Haredi Jews of Brooklyn, like our Jewish ancestors, hew to halacha and thus lack those options.

And we who sued are not the only ones who saw in the governor’s rules and words an unhealthy focus on Jews.

Josh Hammer, the opinion editor at Newsweek, for instance, accused Cuomo and de Blasio of having “settled on a convenient COVID-19 ‘super spreader’ scapegoat of choice,” adding: “Their choice should be surprising to no one: the Jews.”

And Josh Blackman, a constitutional law professor at South Texas College of Law in Houston noted on the legal blog “The Volokh Conspiracy,”, that the governor “did not impose similar crippling restrictions on at least six New York City ZIP codes with similar COVID-19 positivity rates that — surprise! — are not predominantly Jewish.” (Talk about “data-driven, geographically-based efforts.”)

“The governor,” he continued, “is drawing up the 21st-century equivalent of ghettos for Jews.”

Personally, I think those accusers are going a bit too far. Even as I object to the illogic and capriciousness of the governor’s rules, I don’t believe for a moment that he has it in for Jews.

Sadly, though, I do think that the leaders of the New York Jewish Agenda have it in for Orthodox ones.

If the group truly wishes to “promote social justice” and “combat antisemitism,” well, they might begin closer to home.