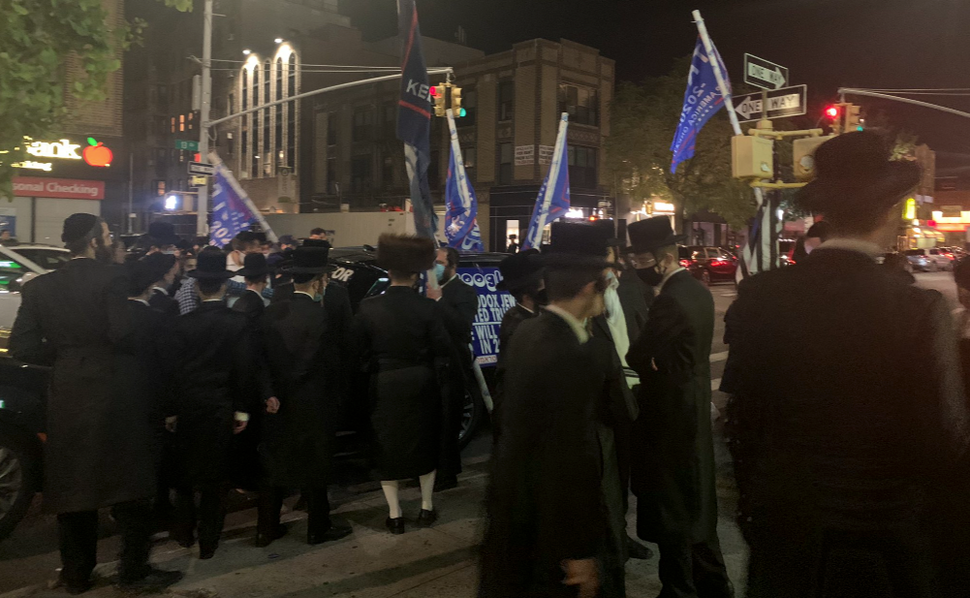 We’ll probably all remember where we were on Friday morning, October 2, when we first learned that Donald Trump had tested positive for Coronavirus. Fewer of us may have noted that on that same day, the virus also struck another leader: Rabbi Chaim Kanievsky.

The two figures are more similar than they may initially appear.

Trump is the president of the United States, presumptive leader of the free world, arguably the most powerful man on the planet. Rabbi Kanievsky, who is 92, is the Gadol HaDor, “the greatest of the generation,” the supreme and final authority on questions of religious law, practice and teaching within his wing of Haredi Judaism in Israel and abroad. In effect, he’s the closest thing in the world of Jewish religious law to a chief justice.

But the comparison between the two goes beyond their considerable power, and can help us understand what exactly is going wrong in the Haredi world when it comes to Covid containment, both in the U.S. and Israel.

Both President Trump and Rabbi Kanievsky used their considerable power and influence to downplay the pandemic. From the pandemic’s onset, both men openly encouraged their followers to disregard scientists’ advice and continue their normal routines. Each claimed the virus wouldn’t hurt the faithful, one because the science was fake, the other because God’s will is stronger.

Coincidentally or not, both constituencies, Trump’s America and Kanievsky’s Haredim, spawned currents of stubborn, sometimes violent resistance to public health guidelines. Both populations have suffered horribly disproportionate rates of Covid infections and deaths compared to those around them.

That Trump has allowed the coronavirus to blossom is inarguable; the numbers make the case. The United States accounts for four percent of the world’s population, but 20% of global Covid deaths. By contrast, China holds 18% of world population but just .004 — four-tenths of one percent — of global deaths.

Unlike Trump’s sledgehammer defiance, Kanievsky’s opposition mainly targeted school closings. He wobbled under competing pressures, though, leaving many followers unsure what to do. In mid-March, immediately after Prime Minister Benjamin Netanyahu first closed schools, Kanievsky ordered his schools to stay open. In his order he cited the Talmud’s dicta that Torah study “protects and saves” and that the world exists only because of children’s Torah study. The result was police raids on elementary schools.

He backtracked days later, urging compliance with regulations, then reversed himself again in April and yet again a day later. In September, he instructed secondary yeshivas to stop testing students so they wouldn’t have to leave the study halls for quarantine.

Here, too, the numbers correlate strongly with bad leadership, and tell a devastating tale. This community is a single crisis, battering a single integrated community and subculture that stretches across several continents, mainly in Israel and metropolitan New York. Israeli Haredim account for about 12% of the population, but 40% of new infections in the current wave. The Haredi death rate from Covid today is about three times that of the population at large. Haredim comprise about 20% of Israel’s primary and secondary school students, but 51% of student Covid infections. Haredi towns and neighborhoods have by far led the nation in infections and deaths, making them prime targets lockdowns, then protests and, lately, riots.

The experience in the New York area seems to be similar, based on anecdotal evidence and crude yardsticks. When the pandemic began spreading in the city last March, the first epicenters were around Borough Park and Williamsburg, the most heavily Haredi-populated Brooklyn neighborhoods. In New Jersey, one of the first major epicenters was the largely Haredi township of Lakewood.

This month, when by Governor Cuomo and Mayor de Blasio announced a new lockdown on nine ZIP codes with highest new infection rates, most were major Haredi centers. The community has responded with outrage and some street violence, claiming they’ve been singled out because they’re Jewish. In fact, enforcement goes where the germs are.

Still, when all is said and done, the one factor that most unites Kanievsky’s Haredim and Trump’s base and their Covid defiance worlds is a feeling of embattled outsiderness, a sense that each is defending a culture and value system under assault by liberal intellectuals who disdain their world and aim to replace it.

In both worlds there’s a moderate majority that disapproves of the hard core but won’t turn against it, that wants to find a common ground between its world and the world of liberal change, but isn’t sure the liberal world wants that too.

And they may not be wrong.