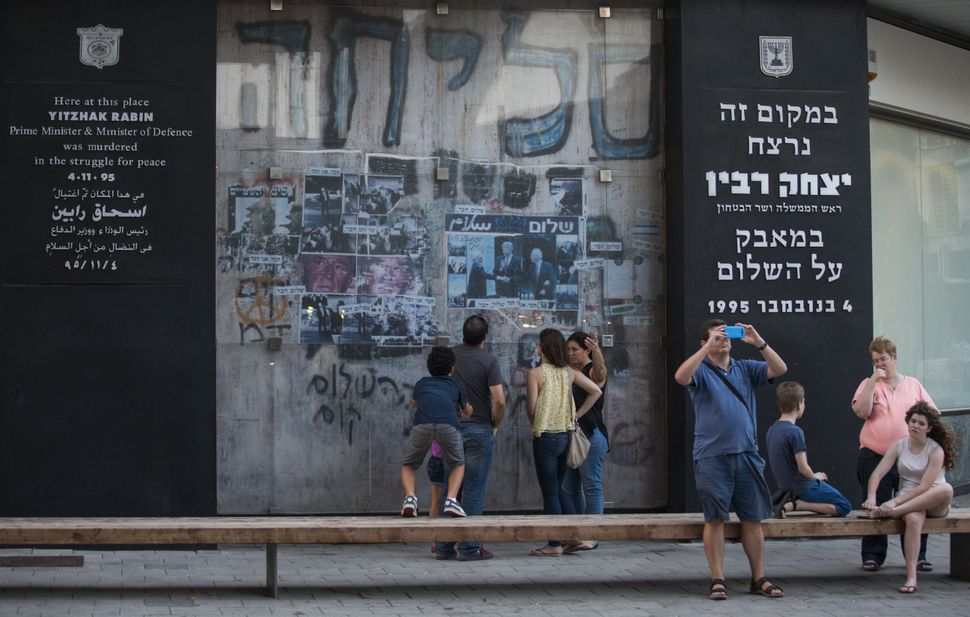 These remarks are drawn from a commemoration that Americans for Peace Now organized in memory of Yitzhak Rabin’s 25 year yarzheit.

There are moments in history that first devastate us and then compel us to recommit to the struggle for justice. The murder of Martin Luther King. The murder of Mahatma Ghandi. The murder of Israeli Prime Minister Yitzhak Rabin 25 years ago this November. Rabin was not perfect. Palestinians and Israelis said and did terrible things to each other, but he changed and was committed to change.

Rabin was assassinated because of that commitment to change and because of the quest for peace. He not only wanted to trade his soldier’s legacy for that of peacemaker, he also sought to heal the rifts inside of Israeli society. Yitzhak Rabin’s legacy includes the most progressive domestic agenda that Israel has had in its history, including promoting a shared society for Jewish and Arab citizens of Israel alike. Because Prime Minister Rabin understood that democracy is about peace but is also about social and economic justice for everyone. These struggles must be combined.

The American trade union movement saw Rabin as an ally, not only in our shared goal for peace but also for economic and social justice and equality for all Israelis, Jewish, Christian and Muslim. The AFT was active in the creation of the Rabin Center, where the former Prime Minister’s legacy lives on. Today, we embrace young activists who share a similar vision, fighting for a democratic, equal Israel, one that ends the Palestinian occupation that is both inhumane and counter to a dream of a democratic Israel. Every week, tens of thousands of Israelis, often led by the young—but of all ages—take to the streets as they have for months now, demanding that Israel regain its democratic values.

Rabin led the most progressive government in Israel’s history. He aimed to create a more equal society in every way.

Yizhak Rabin showed the world what leadership is. He challenged everything he knew and had been taught, by moving so far beyond his own comfort level.

Here are his words from the Nobel Prize ceremony:

“As a former military man, I will also forever remember the silence of the moment before: the hush when the hands of the clock seem to be spinning forward, when time is running out and in another hour, another minute, the inferno will erupt. In that moment of great tension just before the finger pulls the trigger, just before the fuse begins to burn; in the terrible quiet of that moment, there is still time to wonder, alone: Is it really imperative to act? Is there no other choice? No other way? And then the order is given, and the inferno begins.”

Yitzhak Rabin dug deep inside himself and he discovered that other way. No more infernos. That was his hope. A former military hero, became a hero of Israel’s peace camp precisely because he found a new imperative—to seek peace.

Here is another critical bit from his Nobel speech:

As a teacher, I especially value Rabin’s commitment to next generations. Here, at home, and in Israel, we carry a burden: what is the world that we will leave to our children?

We are in a profoundly critical moment, not only for Israel, but for America and the world. Democratic norms and institutions are under fierce attack both in countries we love. We have a right wing, populist government, with a leader who thrives on hatred and division, who mocks and attacks the press, and who sees the strangers among us as a danger to be feared and mistreated, not as fellow humans.

Both in America and in Israel.

We have a chance to change this here in the US. And, by doing so, bring hope, peace and security to Israel and a future Palestine.

Despair is not a strategy. Martin Luther King preached that: “our weapon is our vote.”

This is a “which side are you on?” moment. We must fight for the heart and soul of this country and of the world. Whether in Israel or the U.S., we must not let up. We must not give up hope.

Justice is on our side. We owe nothing less to Yitzhak Rabin, of blessed memory.

Randi Weingarten is president of the American Federation of Teachers.