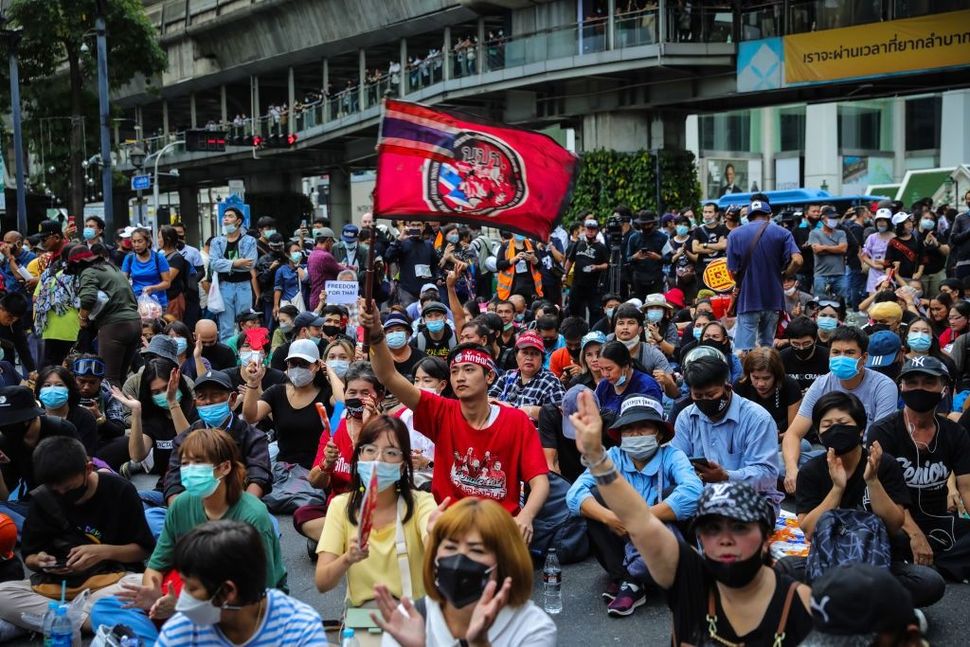 A protester waves a flag as he gathers with others at the Ratchaprasong Intersection on November 18, 2020 in Bangkok, Thailand. Pro-democracy protesters amassed at a key intersection in central Bangkok on Wednesday, a day after tensions escalated outside the Thai parliament and police used tear gas and water cannons to disperse them. Image by Getty Images

The affinity of many non-practicing and even some practicing Jews for the wisdom found in Buddhism is well-known. Prime Minister Ben Gurion was a famous student of Buddhist meditation. Many Israelis find Buddhist practices offer a respite of peace and tranquility in their turbulent climate. Pre-COVID, Thailand has for years been a very popular tourist destination for Israelis and American Jews alike. While enjoying the wide array of delectable Thai cuisine, falafel and hummus can also be easily found, especially around the famous Khaosan neighborhood that houses several Israeli restaurants.

However, today the country has been less idyllically peaceful, as the country rebels against its current government and king.

Rabbi Nachman of Breslov teaches that when our rulers become overly prideful, we are empowered to rise and speak out against them. Even the Chofetz Chaim permits the spreading of “gossip” when the need to warn the community of corrupt politicians supersedes the tenet against lashon hara. In what ways, might the Jewish law and tradition of Thailand’s loyal tourists support or admonish the recent student protests in Thailand against the military-led government and the Thai monarchy?

While nearly three millennia have passed since the reign of King Solomon, the last ruler of a unified kingdom of Judah and Israel in 930 BCE, the Kingdom of Thailand still lives under a monarch, albeit one whose power is generally limited through a constitution. Both Solomon and Thailand’s current 10th king, Maha Vajiralongkorn, share a commonality as sons of beloved fathers who ruled before them.

While Solomon followed King David, who ruled for 40 years, Vajiralongkorn follows the long-reigning King Bhumibol Adulyadej, who is revered as the father of modern Thailand, ruling for 70 years until his recent death in 2016. Both Solomon and Vajiralongkorn also have quite the reputation for their love of women. The Thai king still keeps a consort and has been married four times. Solomon though easily outpaces him on this aspect with a biblical total of 700 wives and 300 concubines.

The current government is still essentially run by the military after the 12th coup in the last 80 years in 2014. At the time, the people were mostly happy to see the first female Prime Minister Yingluck Shinawatra out of power, after accusations of using the office for her personal wealth. But most Thais wanted only a limited stay of the military led by General Prayut Chan-ocha.

After five years of the military’s reign, coupled with the death of beloved King Bhumibol, pent-up demand for action began growing. A general election in 2019 resulted in murky results, with three parties each receiving 30% of the votes. Ultimately, the Thai assembly chose to select Chan-ocha as Prime Minister, seen by many as a continuation of military rule. It is also no secret that many Thai people hold little love for Vajiralongkorn, who was often viewed as the spoiled and untrustworthy son, especially in contrast to the universal adoration of his father.

Laws forbidding public criticism may appear out of alignment with the generally tolerant Thai population, in a country where Buddhist traditions are practiced in nine out of 10 households, a non-theistic belief system that stays out of the way of the day-to-day affairs of government. When you think of countries that criminally punish criticism, you think of totalitarian regimes and theocracies. Most Thai people have seen the King as serving them well, keeping Thailand out of the hands of any colonizers and never having to experience a long diaspora like the Jewish people.

Prominent in the list of demands by Thai protestors, who have been gathering in crowds easily surpassing 10,000, is the elimination of the les majeste edict, which makes criminal any public criticism of the King. Several of the protest leaders, led by a young University female named “Rung”, have been jailed or detained for brief periods of time in the past month as the military cracked down against public criticism of Vajiralongkorn, as well as the government itself. At this point, the cat is almost out of the bag, and the les majeste edict is temporarily falling by the wayside as thousands no longer restrain themselves to make public accusations of both the Palace and Prime Minister.

The King has secluded himself in Southern Germany for most of the time since the COVID pandemic began, prompting the hashtag #whydoweneedaking which gained over a million retweets. In addition to rescinding laws against public criticism, protestors want to make cuts into the spending habits of the palace, which controls a net worth estimated at over $30 billion.

Recent events by the military-led government include efforts to quash a new political party, supported by many younger people, which ignited the recent protests in addition to dropping criminal vehicular charges in the killing of a police officer by the son of one of Thailand’s wealthiest and well-connected families. Many are also convinced that palace officials had a role in the abduction and murder of Thai activists in neighboring Cambodia.

Unexpected public remarks from the King recently included his “love for all his people” and a potential for compromise. Certainly, a dose of Solomon-like wisdom could help Thailand move forward during this bumpy period of transition. Unlike King Solomon, who needed only to deal with the direct appeal by two women in the fate of one infant, decisions from the King and the government are heavily influenced by the billionaire power brokers that economically rule a country with vast income inequality.

So while Jewish teachings certainly support the on-going practices, Jews are by tradition critics and reformers. As with everything in life, Judaism would remind the Thai that it is not what you do, but how you do it. Protestors must balance their outrage with wisdom in maintaining their credibility among the greater population of Thais, many of whom agree, but perhaps do not see the situation as dire as the students do.

American Jews would certainly support any action that would bring about “tikkun olam,” especially against any public and corporate corruption. Thailand, however, will remain overall a peaceful country, even with the current protests. As soon as COVID restrictions can be lifted or managed for tourism, the country certainly will continue to be a favorite retreat for Jews from around the world, whether for meditation, cuisine or beach life.