From Kamala and Doug to Biden’s grandkids, it’s time to be thankful for interfaith families 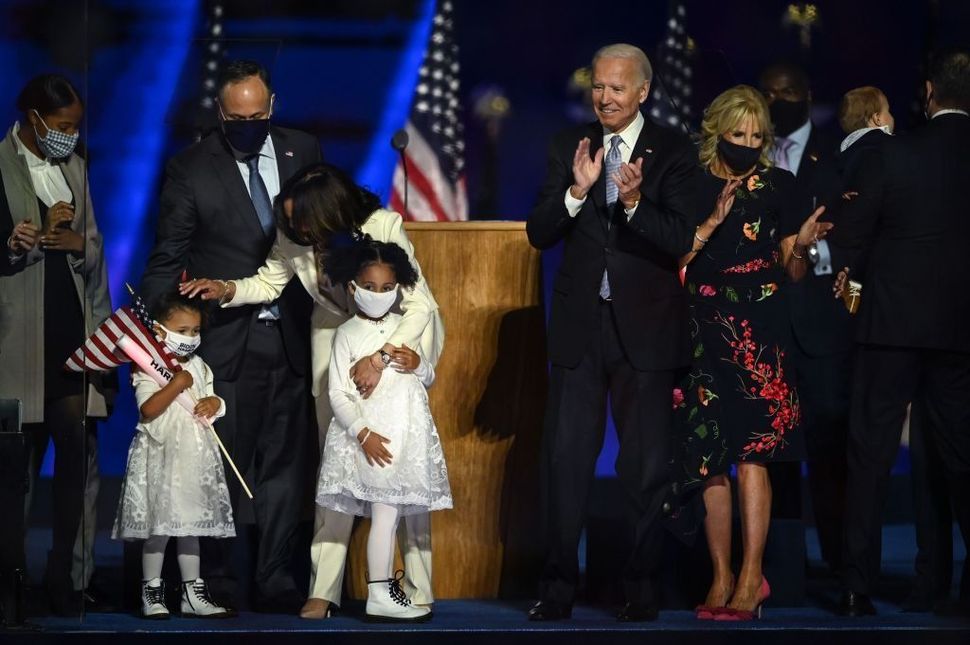 You probably know by now that Vice President-Elect Kamala Harris and First Husband-Elect Doug Emhoff are part of a Jewish interfaith couple. And President-Elect Joe Biden’s grandkids are all Jewish, after each of his children married a Jewish spouse. Biden’s incoming Chief of Staff Ron Klain is also part of a Jewish interfaith couple, making the incoming administration arguably one of the most Jewish and interfaith-friendly ever.

The incoming Biden Administration is also part of a growing trend of Jewish interfaith families in positions of power within U.S. politics. Outgoing President Trump’s grandkids are Jewish, too, after his daughter Ivanka converted to Judaism before marrying White House advisor and son-in-law Jared Kushner. And you might remember that in 2010, former First Kid Chelsea Clinton married Marc Mezvinsky — another Jewish interfaith couple — or that Speaker of the House Nancy Pelosi is also part of an interfaith family. One of her daughters married a Jewish man, and the Speaker has spoken with pride about her Jewish grandkids.

In the past 10 years, the highest profile families in American politics have included Jews — because of interfaith families. Some spouses, like Ivanka Trump, chose to convert to Judaism. Most others, like Harris and Clinton, have chosen not to.

The rise in visibility among Jewish interfaith families in American politics points to a broader trend. It’s not only that interfaith families are the fastest growing population in progressive Judaism, with at least 72 percent of non-Orthodox Jews marrying someone who is not Jewish. It’s also that the U.S. Jewish population is steadily increasing because of the rise in Jews marrying people who are not born Jewish.

Social psychologist and head of Brandeis University’s Cohen Center for Modern Jewish Studies Leonard Saxe noted in an article in The Jerusalem Post last year that the U.S. Jewish population is steadily increasing, from nearly 7 million in 2013 to almost 7.5 million in 2018. He explained that one big reason for the growth is that interfaith couples are increasingly raising their children Jewish — almost 60 percent of adult millennials identify as Jewish, and nearly 80 percent of the current generation. This is a significant increase over previous generations.

And yet, we continue to be ambivalent — or downright negative — about the Jewish interfaith couples in our midst. We cheer Harris’ Yiddish nickname (Mamaleh, in case you haven’t heard) and Jewish family members working at the White House. But at the same time, others in our community have continued to condemn the Second Family, and interfaith families in general.

I am beyond delighted that the first Jewish 2nd family is interfaith and multiracial.

Maybe now the Jewish community will be able to see such families as normal, sacred, and essential.

That future is so damn bright.

When Rabbi Emily Cohen, who grew up with a Jewish parent and a Quaker parent, tweeted happily about the Second Family being interfaith and multiracial, there was a litany of negative, damning responses. One reply said that we should have “sat shiva” for Emhoff, while another wrote, “Multiracial Jewish families are undoubtedly essential to our people. Interfaith remains, at best, an open question.”

But it’s not just the words many use to talk about interfaith couples and families. It’s the policies that many of our largest Jewish institutions and leaders have in place that continue to reflect the second-class citizenry of interfaith couples and families. After all, Emhoff couldn’t go to most rabbinic schools in the country if he wanted to — because his wife is not Jewish. Only three rabbinic seminaries will admit and ordain Jews who are part of interfaith couples: the Reconstructionist Rabbinical College, the International Institute for Secular Humanistic Judaism and the ALEPH Rabbinic Program.

Rabbi Gardenswartz’ words are true not only for the Conservative Movement, but for every other Jewish institution. If the Jewish community continues to tell interfaith couples, their kids and their parents, that they are not part of Jewish life, they will continue to live on the outskirts of Jewish life. In a recent survey of interfaith couples by 18Doors and Benenson Strategy Group, more than half of those who said they weren’t currently engaged in Jewish life were interested in doing so — but hadn’t found a community that felt right for their families, and many felt that communities around them weren’t accepting of interfaith couples. Why would anyone choose to be part of a community where they are treated as “less-than,” as second class citizens?

We have an opportunity to change that, and to express gratitude to the growing number of interfaith couples and families who want to be part of Jewish life and expand our community, rather than simply tolerating, actively condemning or criticizing the Jewish interfaith couples who are a growing part of our communities. And what better time to begin than now? Jewish interfaith families are one of our blessings — let’s start treating them that way.

Jodi Bromberg is the CEO of 18Doors (formerly InterfaithFamily), the national Jewish nonprofit that supports interfaith families exploring Jewish life, and is also part of second generation Jewish interfaith family. Ruth Nemzoff is the author of Don’t Roll Your Eyes: Making In-Laws Into Family, a scholar at Brandeis Women’s Studies Center and a board member of 18Doors.

From Kamala and Doug to Biden’s grandkids, it’s time to be thankful for interfaith families