Kamala Harris and Douglas Emhoff made history for interfaith families. All Jews should celebrate that 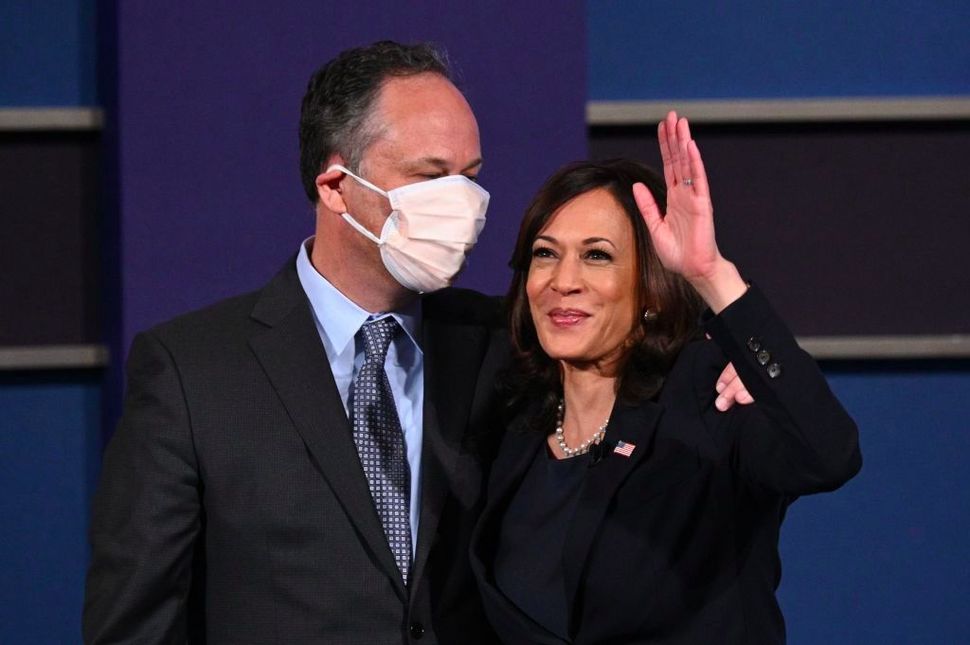 Douglass Emhoff, a man only slightly less devoted to mask-wearing than to hugging his wife. Image by Getty

When Kamala Harris becomes Vice President in January, she’ll have the privilege and burden of representing many “firsts.” She’ll be the first female, first Black, and first South Asian person to serve in the position.

⁦@jaketapper⁩ points out it ⁦@DouglasEmhoff⁩ may very well be “the first Jew” to live in the VP house. #Election2020 pic.twitter.com/wGOieEWnQ8

Statistically, the twofold nature of this milestone isn’t surprising. According to a 2013 Pew survey, the rate of interfaith marriages among non-Orthodox Jews, who make up the majority of the American Jewish population, is 71%. So it’s more likely than not that the first Jewish couple to land in the highest echelons of the executive branch would be an interfaith one. But, given the fear-mongering about intermarriage and the casual scrutiny interfaith families face within Jewish institutions, this still feels like a very big deal.

If, like me, you’re a Jew with a non-Jewish parent, you probably weren’t totally surprised when Israeli education minister Rafi Peretz compared intermarriage to a “second Holocaust.” While we decorate Christmas trees with Jewish stars, while we teach our non-Jewish relatives the difference between bar and bat mitzvah, while our non-Jewish parents drill us on our Torah portions and gamely erect sukkahs in the backyard, we get to read mournful think pieces lamenting our existence as a “disheartening” trend that threatens “Jewish-peoplehood power” and inevitably leads to the creation of non-Jewish families. We are presented with the opportunity to join youth organizations that, until 2014, called on teenage leaders to “refrain” from dating non-Jews. And we can take sponsored trips to Israel whose tacit purpose is to prevent us from repeating the errors of our elders.

Claims that interfaith marriage is a threat to Jewish survival rely on a belief that only children with traditional Jewish upbringings are Jewish “enough;” such arguments disregard data suggesting that 60% of interfaith couples raise their children in partially or culturally Jewish homes. This line of thinking can also function as a self-fulfilling prophecy: it’s easy to understand why, faced with such fundamental distrust, interfaith families might opt out of Jewish life entirely. Even the first step towards starting a Jewish family — a Jewish wedding — can be difficult for interfaith couples. Only the Reform and Reconstructionist movements allow their rabbis to officiate interfaith marriages. And while the majority of rabbis in those denominations are now happy to do so, that wasn’t always the case: as recently as 1995, only 47% of rabbis across both denominations were willing.

Harris and Emhoff are breaking barriers for a community that, though it may delight in Kamala’s Yiddish-inflected nickname, remains fundamentally uncertain about unions like theirs. So far, the couple has navigated that territory confidently. They occasionally nod to their Jewishness: They smashed a glass at their wedding, Emhoff has confessed that he was bar mitzvahed in a three-piece velour suit and Harris has reveled in the face-squishing tendencies of her Brooklyn-born Jewish mother-in-law.

But while Emhoff has emerged as the Democratic campaign’s designated member of the tribe, he doesn’t feel the need to explain or justify the Jewishness of his marriage. He doesn’t post pictures of his seder plate to assure us that he’s observing Passover. If Harris has memorized the Four Questions — or if she hasn’t — we don’t know about it. That habit might demonstrate a desire for privacy or a lack of interest in religious ritual. But on some level, it also represents a rejection of the scrutiny often applied to interfaith families, the assumption that they can’t possibly be practicing Judaism the right way: Which holidays do you celebrate? What prayers do you know?

I’m excited to see this modern Jewish family installed in the White House. I’m looking forward to Christmas stockings stuffed with chocolate gelt and Hanukkah candle-lighting ceremonies during which Harris fulfills the time-honored interfaith tradition of mumble-mouthing her way through the prayers. Not only would this be the Hallmark moment that Hallmark has repeatedly failed to provide for Jews, it would be a tangible boon: Public acceptance of the Harris-Emhoff clan could help more interfaith families venture into Jewish life, ultimately strengthening and broadening the Jewish community.

But I also know that the duo, with all their “firsts,” represent a choice for American Jews. We can celebrate this moment as a milestone, or we can grumble that this wasn’t exactly what we had in mind. We can hold out for a “more Jewish” couple to occupy this high-profile role.

Whatever we do, we’ll be sending a message that interfaith families will hear loud and clear.

Kamala Harris and Douglas Emhoff made history for interfaith families. All Jews should celebrate that