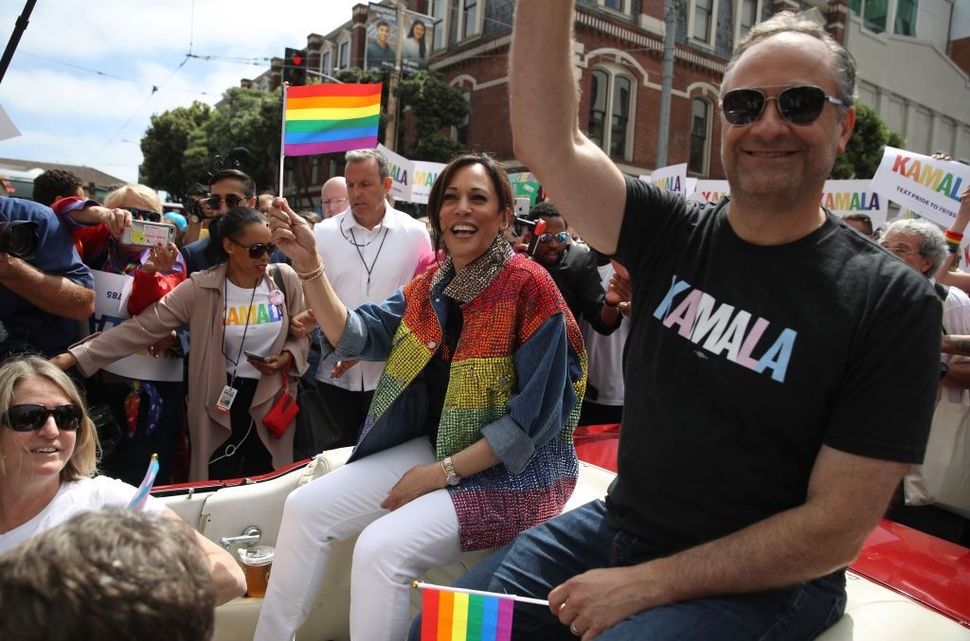 Editor’s note: We’re republishing this story, first published in July, 2019, after Kamala Harris was named vice president-elect on Nov. 7, 2020 — and Doug Emhoff, her hot Jewish lawyer husband, was standing right next to her to celebrate.

True to the bonkers way that Jewish history has always gone, it’s possible for individual Jewish people to succeed on a mass scale while, separately, hatred and violence against Jews as a group flourishes. And boy, is it confusing — between the Trump-Kushners celebrating Shavuot, the president trying to “out” Jon Stewart as Jewish, and Jewish Dem hopeful Marianne Williamson declaring that she is a “bitch for God,” American Jews are back-and-forth between spontaneous horas and checking to make sure our passports are up to date.

There’s no question that Jews and people with Jewish family members are active in this election in a way that is unprecedented. These days, you look away from Twitter for ten minutes, and all of a sudden Joe Biden has a Jewish daughter-in-law. But there’s a (six-pointed) star in the making who must be discussed.

Look at this fun dork!

His name? Douglas C. Emhoff, esquire. His game? Loving and supporting California senator and 2020 hopeful Kamala Harris, and representing the Taco Bell Chihuahua in legal disputes. (This is not a joke.)

He stands out, even among the tip-top crew of people who are in the unofficial running for First Lady and First-First Gentleman. Easy on the eyes and with resumes longer than a ketubah, each potential first-spouse is working as hard to win America’s heart as a contestant on “The Bachelorette.”

Senator Elizabeth Warren’s husband Bruce seems like a kindly high school band teacher who brings apple cider donuts to class on Fridays. Erica Lira Castro, who is married to HUD Secretary Julian Castro, is an educator and policy-maker and was the first person in her family to graduate college — you just know she’d agree to French-braid your hair and write your college recommendation letter. Mayor Pete’s husband Chasten Buttigieg has the looks and charisma of Ronan Farrow and the social media savvy of a Gen Z meme account administrator. And defending champion Melania Trump is an actual supermodel with a wardrobe that blends Givenchy and irony, and a caviar-based skincare line. Competition is fierce. 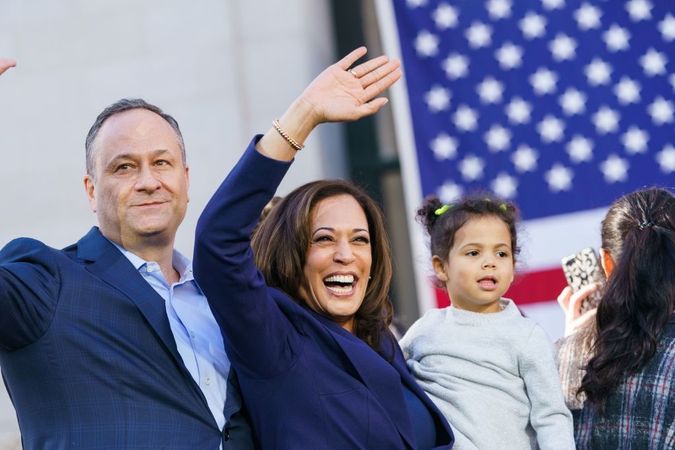 And yet, there is only one in the bunch who can be described as a Hot Jewish Dad. Only one future First Gentleman is a Brooklyn-born bar mitzvah boy who grew up to become an actual nice Jewish lawyer — he’s a top litigator who does volunteer legal aid work on behalf of children and gives mega money to tzedakah. And only one candidate’s partner has made it clear that before his commitment to his wife, his country, and his work, comes his commitment to his children. (Ayelet Waldman is shaking.)

A Forward staffer who asked not to be named put it best: “If Bernie Sanders is a Zayde, Doug Emhoff is a Zaddy.” (“Zaddy” is a slang term for a mature man who has raw sex appeal and possibly, a mortgage.) This is a man who seems like he makes a mean grilled cheese, and is always available to talk you through filling out a W-4. If he ever heard about you getting rejected he would squint at you and say, “Aw, screw ‘em! You’ve got a great head on your shoulders. Anyone would be lucky to be with you.” Then he would give you a twenty and say, “Order yourselves a pizza, girls, and keep the change.” Can’t you just see Doug Emhoff wiping away a single tear as the credits of the movie “Coco” roll, then working through the pain by building a set of bunk-beds?

Let us examine the relevant facts. Let us start, as the great litigator in the sky said, “Ab initio” — in the beginning.

He has good genes:

Kamala Harris’ in-laws, Mike and Barb, are tough-talking Brooklyn Jews who shop at Costco and aren’t afraid to grab near-strangers by the face and deliver biting analysis of their appearances. The Emhoffs have taken to the campaign trail, sporting sharp sunglasses and statement-lipstick.

On the trail for @kamalaharris with my parents!!

He lives for his family, especially his children:

Let’s do a little math — Doug Emhoff has uploaded 72 photos to Instagram. 24 of those photos feature either his children, his parents, his siblings, or both. That’s one-third! Cole, a recent college graduate, and Ella, an undergraduate art student, call their step-mom “Momala,” which is helpful if you’re still waffling on how to pronounce her name, plus it has Yiddishe flavor. In interviews and social media bios, Emhoff describes himself as a dad before anything else.

Happiness is sitting with Cole and Ella at the big rally. LA showed up!

Anyone can don campaign gear and wave from a podium. It takes an especially evolved person of any gender to relocate to their spouse’s city and pass a second bar exam — Washington D.C.’s is a two-day, three-part, nine-hour humdinger — to be near to her. Emhoff, who did just that when Harris’ congressional work took her away from California, is also the only potential future White House spouse whose support of his candidate has led him to fisticuffs. When a protester rushed the stage at one of Harris’ speaking events and snatched the microphone out of her hands, Emhoff barreled onto the stage and wrestled the microphone out of his hands. Afterwards, he wrote of the incident, “Thx for all the kind notes. We are good. I love Kamala Harris⁩ and would do anything for her.” If that doesn’t create a zero-gravity feeling around your bladder, what will?

In fact, Emhoff’s public declarations of love for his wife are legion. His tweets and Instagram comments about her read like James Joyce’s letters to Norah, except instead of dirty they are intensely genuine, and instead of being written by an Irish novelist, they were written by a hot Jewish dad. “Dear ⁦Kamala Harris⁩: I love you, I believe in you, and I’m so proud of you. The whole country is going to see what I get to see every day. You are amazing.” Apropos of a vaguely-related CNN poll, he tweeted, “Kamala Harris is strong and fierce (and also loving, empathetic, funny, soulful and a very good listener).” The vast majority of Emhoff’s Instagram photos feature either Harris, a Harris event, or Harris paraphernalia. Look — man who doesn’t stand in the way of his wife’s success is not at all where we want to set the bar. But Emhoff is serving actual romance on a massive stage. That’s hot.

Like a dad presiding over the snack table at softball practice, Emhoff has sought out friendships with the other candidates and their spouses. His best chemistry is with Chasten Buttigieg, the husband of Mayor Pete Buttigieg, and the 2020 figure most deserving of his own TV show. “Sometimes the only person you can talk to about going through this as a spouse, is someone going through this as a spouse!” he wrote on social media, accompanying a picture of the two men.

Dear @Chas10Buttigieg: I’m not crying, just have something in my eyes. Thx for the support. #spousessticktogether https://t.co/vdeeUCGqkg

He has also gamely chilled with Amy Klobuchar, Beto O’Rourke, and Klobuchar’s husband, fellow attorney John Bessler. He seems to see his wife’s competition against brilliant political minds less as a battle, more as an ongoing neighborhood potluck. Here he is, mugging joyfully with Elizabeth Warren and her husband Bruce Mann.

Sans Harris, he has taken to traveling the country, strolling into Harris headquarters to pep up employees and volunteers. See how he makes his presence known — like a dad, bringing veggie burgers to the barbecue:

Cool moment from HQ. These folks have put their lives on hold, moved to Baltimore, all to help elect Kamala Harris. Means so much to us!❤️❤️

And when it matters most, Emhoff isn’t chill at all — public tax returns show that for the first three years when Harris was California’s Attorney General, she reported zero charitable giving. When she wed Emhoff in 2014, the couple began giving tens of thousands.