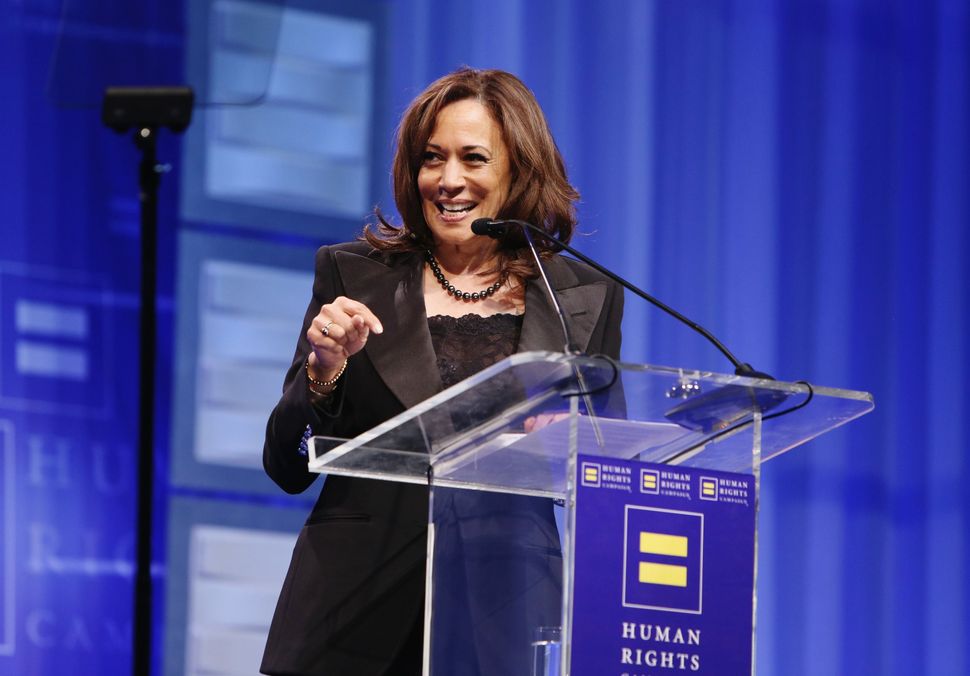 Harris, 54, has some Jewish nuggets in her history.

She smashed a glass at her wedding:

She met her Jewish husband, Douglas Emhoff, in San Francisco,in 2014 — Harris’ sister Maya officiated — and smashed a glass to honor Emhoff’s upbringing. It was her first marriage and his second — Emhoff has two children from his first marriage.

Emhoff took the Washington, D.C. bar exam in 2017 so he could work in the same city.

Emhoff’s Twitter feed is pretty much “I love my wife” all the time (take that, Kellyanne and George Conway).

She did the blue box thing:

“So having grown up in the Bay Area, I fondly remember those Jewish national fund boxes that we would use to collect donations to plant trees for Israel,” she said at the American Israel Public Affairs Committee in 2017. “Years later when I visited Israel for the first time, I saw the fruits of that effort and the Israeli ingenuity that has truly made a desert bloom.”

No mention why Harris was a blue box girl growing up — and Google was no help. JTA has put a query into her office.

Since being elected in 2016, Harris has spoken twice at the annual policy conference of the American Israel Public Affairs Committee. Her 2018 speech, with the California delegation, was off the record (itself not unusual, although critics of Israel were unnerved), but she gave a good picture of where she stands in her 2017 speech.

She’s for two states — so is AIPAC, although, sometimes less than emphatically — but she doesn’t believe in big-footing either side.

“I believe that a resolution to this conflict cannot be imposed,” she said. “It must be agreed upon by the parties themselves.”

More than half of the Democratic caucus in the Senate gets the endorsement of J Street, the Jewish liberal lobbying group that believes pressure is necessary to start peace talks. J Street did not endorse Harris. Her only association with the group was in November 2017, when she was one of 17 local and federal politicians on the host committee (i.e., “yes you can stick my name on the invitation”) of a party thrown by J Street’s Los Angeles chapter. She also met a year ago in her office with the group’s director, Jeremy Ben-Ami.

She supported the Iran nuclear deal, although she was not a senator in 2015 when Congress voted on it, and is on the record opposing the Boycott, Divestment and Sanctions movement targeting Israel.

“The beauty of the architecture and spirit of design left a lasting impression — the straight lines in the building represent the immutable nature of truth, while the curved glass and walls were built to represent the fluid nature of finding justice,” she told the J. The Jewish News of Northern California in 2016. “The Court, like Israel, is a beautiful home to democracy and justice in a region where radicalism and authoritarianism all too often shape government.”

Harris created a hate crimes that in 2012 anti-Jewish hate crimes were the most commonplace religion-based hate crime.)

One of her first successful Senate actions was to get passed a non-binding Senate resolution that named religious institutions as possible targets of hate crimes, and urged better hate crime reporting, a key demand of Jewish civil rights groups over the years.

Her big sisters are Jewish:

Well, in political terms, anyway. In October 2016, she got key endorsements from the state’s two Jewish senators — Barbara Boxer, who was retiring and whom Harris would replace, and Dianne Feinstein, the state’s senior senator. This was important because in California’s “jungle primary” system the two top vote-getters in the primaries get on the November ballot even if they are of the same party. Harris was facing a popular Democrat, Rep. Loretta Sanchez, in the general election.