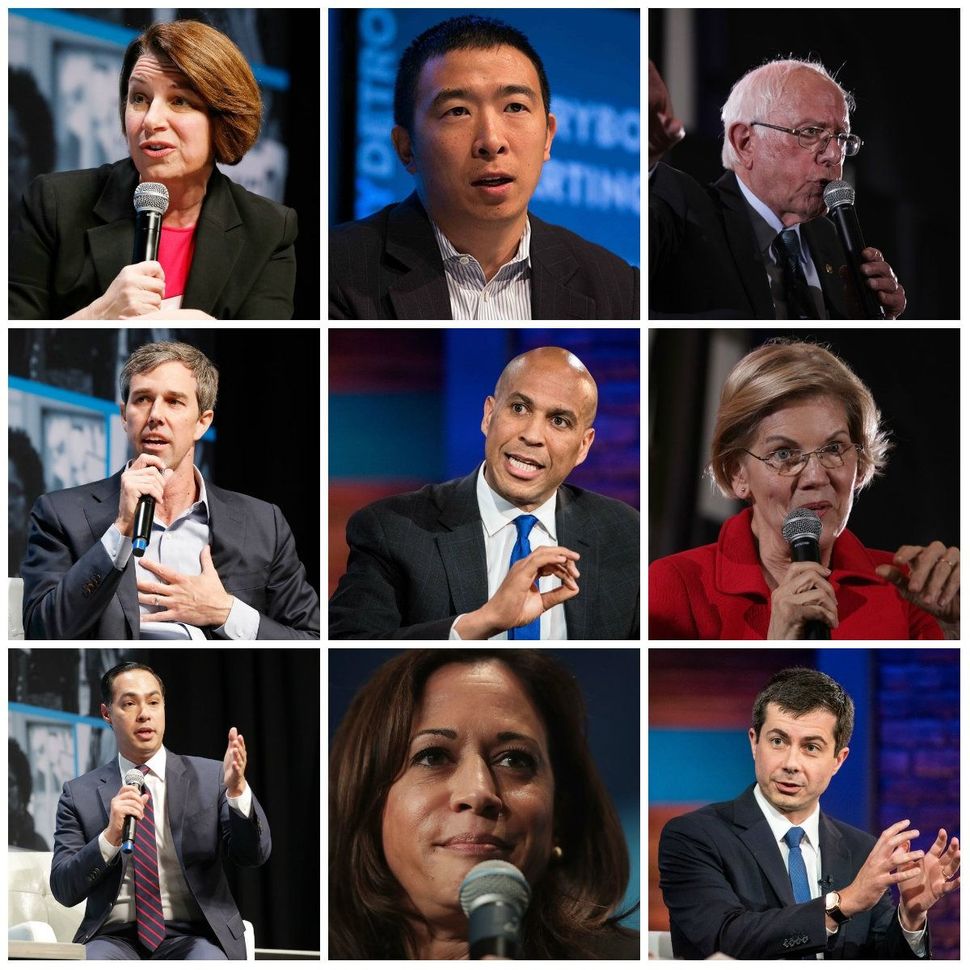 Over the past few months, The New York Times has asked 22 Democratic presidential candidates to sit down with their video cameras and answer 18 short but revealing questions. Many of the questions were hard-hitting policy queries like “In an ideal world, would anyone own handguns?” and “Should tech giants like Facebook, Amazon and Google be broken up?”, but others were about their comfort foods and sleep habits.

One of the questions was, “Do you think Israel meets international standards of human rights?” A poll last year found that 93% of Jewish voters consider themselves “pro-Israel,” and around three-quarters of Jews vote Democrat, but some Jewish liberals have grown concerned that the party is distancing itself from Israel, citing everything two House Democrats’ support for the boycott-Israel movement to the failure of some Democratic presidential candidates to attend the annual AIPAC Policy Conference. But groups like the Jewish Democratic Council of America and Democratic Majority for Israel argue that many Democratic politicians’ opposition to Israeli Prime Minister Benjamin Netanyahu’s policies doesn’t mean that the party is moving in an anti-Israel direction.

Here’s how nine of the top ten candidates (according to RealClearPolitics’s polling average) answered the question. Note: Former Vice President Joe Biden declined to participate despite repeated requests from the Times.

“Do you think Israel meets international standards of human rights?”

“I have great concerns about the role that Netanyahu is playing in Israel and their relationship with the Palestinians. As I’ve said many times, I believe 100% in the right for Israel not only to exist, but to exist in peace and security. But the role of the United States is to work with all of the entities in the region, including the Palestinians, and to do that in an even-handed way.”

“I think that Israel is in a really tough neighborhood. I understand that. They face enormous challenges and they are our strong ally. We need a liberal democracy in that region and to work with that liberal democracy. But it is also the case that we need to encourage our ally, the way that we would any good friend, to come to the table with the Palestinians and to work toward a permanent solution. I strongly support a two-state solution and I believe that a good friend says to the Palestinians and to the Israelis, ‘come to the table and negotiate.’ The U.S. cannot dictate the terms of a long-term settlement with the Palestinians and the Israelis. But what it can do is urge both of them to go there and to stay out of the way, to let them negotiate the pieces that are most important to them for a lasting peace… The current situation is not tenable. It may be tenable for a week. It may be tenable for a month… but it is not in the long term interest of either the Palestinians and the Israelis to continue on the path they’re on. They need to come to a two-state solution.”

“I think that Israel as a country is dedicated to being a democracy and is one of our closest friends in that region, and that we should understand the shared values and priorities that we have as a democracy and conduct foreign policy in a way that is consistent with understanding the alignment between the American people and the people of Israel.

[Question from reporter] “Does Israel meet human rights standards to your personal satisfaction?”

“Well, talk in more detail, what specifically are you referring to?”

“As a country overall, in terms of how they…”

“I think that Israel’s human rights record is problematic and moving in the wrong direction under the current right-wing government. Look, the U.S. can be committed to Israeli security and the U.S.-Israeli alliance while also guiding our ally in a direction that leads toward peace. And I’m very worried, especially with some of their latest talk about annexation in the West Bank, that their government is moving away from peace that is damaging in the long run to Israeli and Palestinian, and for that matter American, interests.”

“I know that Israel attempts to meet international standards of human rights. I know that they can do a better job, and that’s not just my opinion, that’s from listening to people in Israel say that about their own country. I think we have a role to play to ensure the safety, the human rights, and the dignity of the people of Israel as well as the people of what will become the state for the Palestinians, right now the Palestinian Authority. We cannot compel or force a two-state solution, but it should be our diplomatic goal. And every resource that we invest, every diplomatic effort should be towards that end. That’s the best way in the long term to guarantee the peace, the stability, and the human rights of all people in that region.”

“I think we have a problem in America with the way we are debating issues surrounding Israel and Israel’s security. We have a president that seems to not support this idea of a two-state solution, which has had bipartisan commitment and conviction over decades in our past. My commitment right now is to affirming Israel’s right to exist and affirming Israel’s right to defend itself against enemies which they have virtually surrounding them. But also to affirm the dignity and self-determination of Palestinian people. I believe we can get back to the kind of policies that affirm that two-state solution, that affirm human rights, and that America can be a force to accomplishing that in Israel.”

“Israel is a very, very important ally of the U.S. Certainly some of the actions that are being taken there are deeply problematic and run afoul of some of the standards that we’d like to see countries meet. I’d be hesitant to say that they are in violation of those standards.”

Yes. I think Israel, however, under Prime Minister Netanyahu, has been doing things that are not helpful to bringing peace to the Middle East. The way that he has come out in favor of annexing the Golan Heights. What he has done when it comes to the settlements. The fact that we’re not engaging in serious discussion for a two-state solution, our country and the Palestinians and the Israelis, I think that this is setting us back. And so what I would do is to reach out to restart those negotiations again. I think that President Trump has politicized this issue and has not helped in terms of American support for Israel. Israel is our beacon of democracy in the Mideast. And we have a role to play here that is very important, and it shouldn’t be politicized the way the Trump administration has politicized it. And when Israel does things that I think are against public policy and international policy, I will call them out on it, and I will work with them. But again, I think the way President Trump has done this has made it harder and harder for people to support Israel, and you’re seeing a lot of young people that have fallen away from supporting this beacon of democracy in the Mideast, and I think that needs to change.”

“I believe that Israel, like a lot of other countries, wants to do the right thing, that they can get better. I do believe that we need to recognize and respect the human rights of Palestinians. I agree with former Secretary of State John Kerry that Israel has to choose. It’s going to be a Jewish state or a democratic state. That’s why I believe that a two-state solution is the best solution for Israel. I recognize that that has been made harder over the years through the increase in settlements. My hope is that in the upcoming elections, the Israeli people will send a stronger message about the need for a two-state solution.”

Arielle Kaden is a writer based in New York City whose work has been featured in the Forward and Columbia Journal. She is a graduate of Johns Hopkins University and a recipient of the Fulbright Scholarship. She is currently earning a MFA in Nonfiction Writing at Columbia University and interning for the Opinion Section at the Forward.