WATCH: Cory Booker Quotes Torah In Hebrew To Say ‘U.S. Not A Theocracy’ 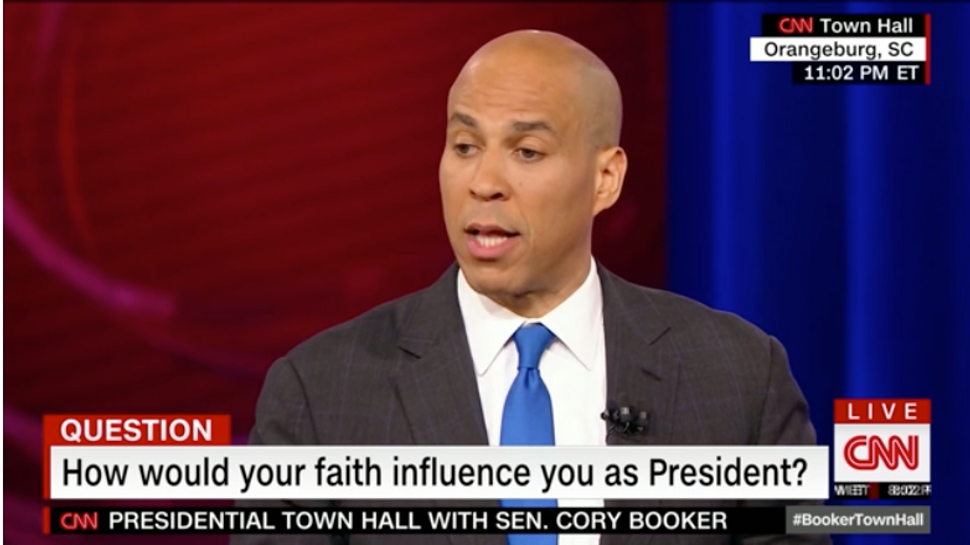 “Can I quote some Hebrew to you?” Senator Cory Booker of New Jersey asked rhetorically on Wednesday night during a CNN presidential town hall. “Because I studied the Torah too.” Click here for video; scroll to the 1:40 mark for the Hebrew.

Booker, who was mostly talking about his Christian faith, is known in the Jewish community for a friendship with Rabbi Shmuley Boteach that started when Booker was a student at Oxford University; Boteach was working as an emissary of the Chabad Lubavitcher movement.

The rabbi founded a Jewish group, the L’Chaim Society, and the black Baptist joined as co-president. Hundreds of Jewish students were drawn to the group’s events, whether for their uplifting spiritual nature, or for the free alcohol — or both. And no one who was there could fail to notice the rare bond between the two.

Later, the bromance splintered on the shoals of the Iran nuclear deal, which Booker voted for.

But the impact of his Jewish education is still clear.

“There’s a song sung during the High Holidays: Ki beiti beit tefillah yikarei l’chol ha-‘amim — ‘may my house be a house of prayer for many nations.’ We are the United States of America. We were not formed as a theocracy. We were formed on the ideal that many of us in our diversity can come together and create one strong whole. And if I am president of the United States, I will fight every day to put more indivisible into this one nation under God.”

Thanks to the Jewish Insider newsletter for tipping the Forward off to this clip.

WATCH: Cory Booker Quotes Torah In Hebrew To Say ‘U.S. Not A Theocracy’