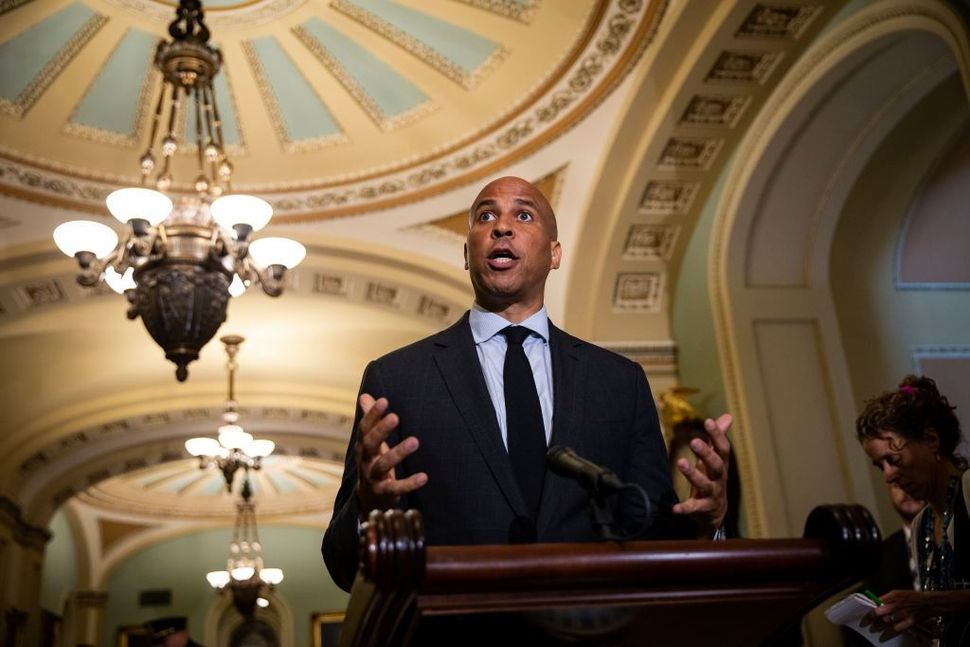 By voting against ant-BDs legislation and distancing himself from Rabbi Shmuley Boteach, presidential candidate Cory Booker is looking to appeal to left wing Jews. Image by Getty Images, Getty Images

On Friday, Senator Cory Booker of New Jersey announced he would seek the 2020 Democratic nomination for president.

For Jewish voters, there is an extraordinary history to consider when it comes to Booker, a former Mayor of Newark and Rhodes Scholar who once offered to tweet a D’var Torah during a snow storm for Jewish kids missing school and welcomed a Manischewitz headquarters into their city with “great naches.”

For years, Booker was widely viewed as a pro-Israel stalwart in the party with a close connection to American Jewish life. But he must now grapple with a changing political environment on the left that has become less favorable to the Jewish state. He must also gain support from the Jewish community, which hardly resembles the one he knows best.

Booker’s personal connection to the Jewish community transcends ordinary political pandering and appears heartily genuine. “It’s been one of the greatest spiritual odysseys of my life,” Booker said of Judaism in a 2013 interview with The Forward. “I think my study of Judaism enriched my Christianity in a way.”

The origins of Booker’s peculiar passion for Judaism and Israel can be found in early-1990s Oxford, where he studied at The Queens’ College shortly after graduating from Stanford. During his time there, he joined the L’Chaim Society, then led by Chabad-Lubavitch’s emissary in Oxford, Rabbi Shmuley Boteach, with whom he remained close for two decades.

It was around this time, too, when Booker first visited Israel. While seldom getting into policy details before his election to the Senate (the Israeli-Palestinian conflict is not an especially pressing issue for the residents of Newark), it was long clear his sympathies lied with Israel and that his rhetoric leaned to the right of the Obama-era Democratic Party.

In 2010, then Mayor Booker told an AIPAC summit in Chicago that “security is about land.” One of the largest donors to his first Senate campaign was NORPAC, a pro-Israel political action committee known for its opposition to the 2015 Iran nuclear agreement.

Amidst a bloody war between Israel and Hamas in Gaza in 2014, Booker gave what amounted to a standard issue pro-Israel speech on the Senate floor in which he said the United States should reject a “false peace.” At the time, the Obama administration was scrambling to broker a ceasefire between the two sides.

But in 2015, Booker stood with the Obama administration and against AIPAC in supporting the Iran nuclear agreement, which infuriated Boteach and led to their falling apart. Boteach’s name does not appear once in Booker’s 2016 memoir, despite what was by all accounts a close and trusting relationship between the two men.

Booker’s independence from the traditional pro-Israel line showed up again in 2017, when President Trump’s recognition of Jerusalem was imminent. Booker told the The Weekly Standard that he thought Jerusalem’s status should be decided in bilateral negotiations, the traditional American and international position that defied a key AIPAC priority.

However, shortly after the 2018 midterm elections, Booker seemingly returned to his old ways when he co-sponsored the Israel Anti-Boycott Act, which sought to prevent American companies from supporting BDS. But last week, Booker voted against proceeding with Senate Bill 1, which contained the type of anti-BDS language he had supported last year. Perhaps he realized that it was best not to come out on the right of Kirsten Gillibrand and Kamala Harris, two Senators who are also running for President and voted against S.1.

Ultimately, Israel will only a play a minor role in Booker’s campaign, but with pro-Palestinian and anti-occupation voices emboldened by the presence of Rashida Tlaib and Ilhan Omar in the halls of Congress, he is unlikely to evade the issue; over the summer Booker was photographed with activists holding (according to him, unwittingly) a sign that read, “From Palestine to Mexico, All The Walls Have Got To Go.”

While it’s unclear what the sum total of Booker’s views on Israel are today, his recent positions suggest he wants to shape a progressive position that will appeal to Democratic voters who supported the Obama administration and continue to back progressive pro-Israel groups like J Street, which also opposed S.1.

Booker, it seems, is putting distance between himself and the blinkered perspective on Israel promoted by Rabbi Boteach and likeminded figures, which he once embraced. If he persists, not only will that put him in a better position to appeal to the party’s increasingly progressive voters, but it will bring him in line with the vast majority of Jewish Democrats who do not identify with Shmuley Boteach.