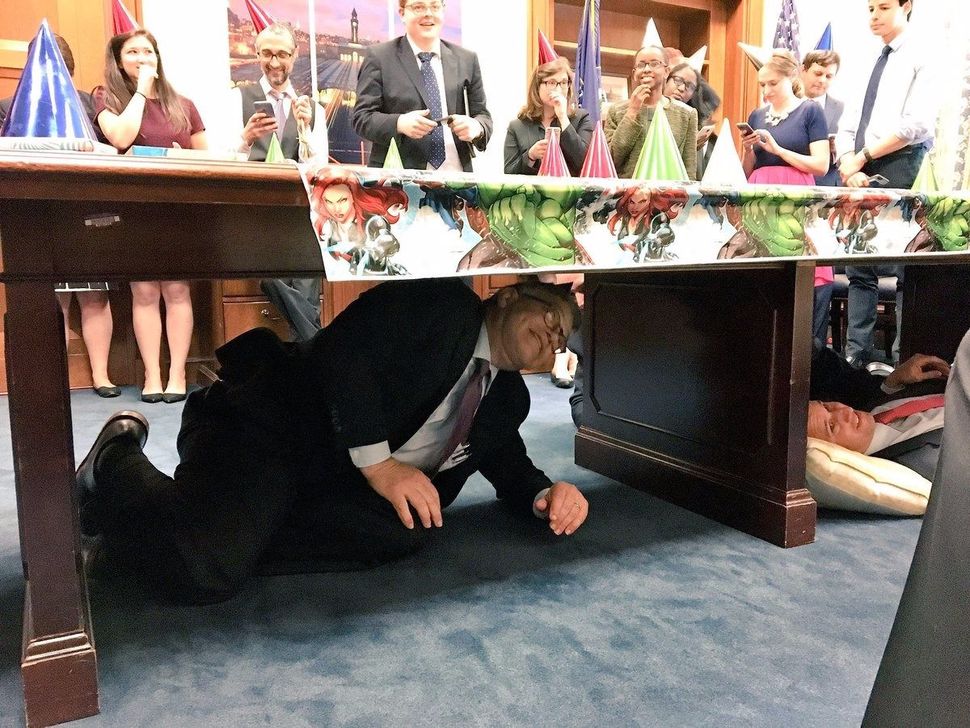 Surprise! Sen. Al Franken hides under a table to surprise Sen. Cory Booker on his birthday. Image by @weprogressives/Twitter

Al Franken is known in Washington for his ability to forge friendships with his fellow senators. The Minnesota senator hosts annual Secret Santas and is often seen laughing with other politicians while riding the congressional subway underneath the Capitol.

But he outdid himself on Thursday, corralling his Democratic Senate colleagues into holding a surprise birthday party on Thursday for Senator Cory Booker of New Jersey, who turned 48.

So glad my staff got this on video. A HUGE thanks to @senfranken for putting forth the HUGE effort to surprise me on my birthday. pic.twitter.com/kzlkOHHzqb

Franken jumped from under a table to surprise Booker, who was greeted by his staffers and many fellow senators. Sen. Kirsten Gillibrand of New York served cake, and Sen. Robert Menendez of New Jersey sang “Happy Birthday” to Booker in Spanish.

Despite not being Jewish himself, Booker is one of the most Jewishly-literate politicians in Washington. He served as the co-president of a Jewish club while studying at Oxford University, and, as Jewish Insider noted on Thursday, he is “perhaps the only Senator who regularly and publicly recites verses from the Torah in Hebrew.”