The Bromance Ends: What Split Cory Booker and Shmuley Boteach? 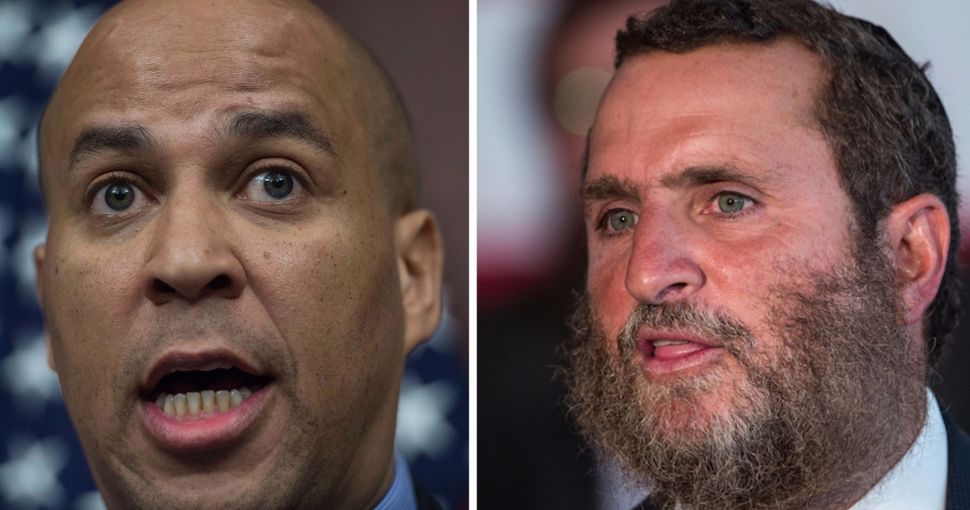 It was the future U.S. senator from New Jersey’s first Purim party, back at Oxford University in the 1990s. The home video shows a young Cory Booker dancing in circles and carrying on his back a bearded man dressed in a clown suit – Rabbi Shmuley Boteach.

But today, instead of bringing a smile to the faces of those involved, the recent re-emergence of this video has only served to worsen open wounds that have yet to heal.

“It took me back all those years. And it made me incredibly sad,” wrote Boteach in his Jerusalem Post column, stating he feels it is now harder for him to forgive Booker, the junior senator from New Jersey. 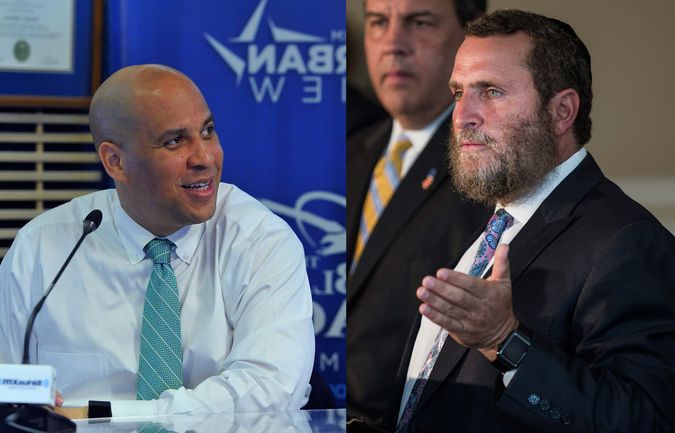 The battle waged last summer over the nuclear deal with Iran has left divisions still visible in many parts of the American Jewish and wider pro-Israel community, but nowhere more so than in its impact on the once-tight relationship between the black pol and the Jewish preacher. Moreover, in recent months, Boteach has dragged the enduring breach into the public, in an angry exhibition of disappointment, anger and disillusion. Booker, himself, chose to remain silent on the issue.

For years, Booker and Boteach’s unlikely bromance captivated political watchers: An up and coming African-American politician and a charismatic populist Orthodox rabbi forging a personal friendship which exceeded, at least up to now, the boundaries of religion, politics, and personal background.

“This relationship was never political, it was a personal relationship based on unlikely, yet very strong, mutual sense of care, and as long as politics were kept marginal, it was possible to sustain it,” said Noah Feldman, a Harvard law professor who was part of Boteach and Booker’s circle going back to their Oxford years.

It was a political fairytale: a young rabbi starting to spread his wings beyond his original mission, which was launched under the sponsorship of the Lubavitch Hasidic sect from which he emerged, and an African-American Rhodes Scholar already marked for greatness. The two met at Oxford, the center of British academic excellence, and immediately clicked. The rabbi founded a Jewish group, the L’Chaim Society, and the black Baptist joined as co-president. Hundreds of Jewish students were drawn to the group’s events, whether for their uplifting spiritual nature, or for the free alcohol — or both. And no one who was there could fail to notice the rare bond between the two.

“Cory was Shmuley’s hevruta,” said Ben Karp, who has known Booker for years and worked on his first mayoral campaign, using a Talmud-era term for study partner. “There was a dissonance between the things they believed in politically,” he added. “There was a physical dissonance: A tall African American and a short white Jew with a beard. These created a dissonance.”

But also a unique friendship which, according to all accounts, was not neither tactical nor instrumental. Still, both parties, and those around them recognized that both men were on the fast track to positions of power, and that the L’Chaim society was an ideal networking venue.

“Shmuley was someone who very visibly and actively promoted himself and the L’Chaim Society as an alternative for Jewish students in Oxford,” said Rob Danin, a former State Department Middle East negotiator who studied at there at the time. “He rubbed the Jewish establishment in Oxford very much the wrong way because he was very brash in his wish to promote himself and the L’Chaim Society in a way that many found offensive.”

Booker and Boteach’s friendship followed them back to New Jersey, where one moved on to become the mayor of Newark and the other to own the unofficial title of “America’s rabbi” thanks to his high-profile relationship with Hollywood stars and his bestselling book on “kosher sex.”

“We’ve spent thousands of Shabbat dinners together,” Boteach said in an interview with the Forward. “There’d be 30 or 40 people at our home and they’d all leave and we’d kick our feet on the couch and we’d sit up to 3-4 in the morning on Friday night.”

In recent years, however, the relationship began to show signs of erosion. Booker and Boteach had some private falling outs, such as when the senator made a private visit the grave of the Lubavitcher rabbi late at night with several Jewish friends and was surprised to later see that Boteach published a photo from the visit, which began to drive the two friends apart.

But then came the nuclear deal with Iran, putting the friendship to its ultimate test.

As Democrats began aligning on both sides of the debate – most with President Obama in favor of the deal and a few against it with much of the pro-Israel community, Booker remained on the fence for weeks. Some in the Jewish community had expected that Booker’s long-standing relationship with Jewish activists and donors, and his deep friendship with Boteach would tilt the balance in favor of opposing the deal. But in early September, Booker announced his decision to side with Obama.

The decision dealt a blow to critics of the deal and to those who had hoped Boteach could deliver Booker. From that point on, politics and friendship could no longer be separated.

“A real friend is someone who tells you the truth and reminds you of who you are,” said Boteach. His falling out with Booker, he insisted, was “absolutely not a personal disagreement,” but rather a “purely policy” dispute over a deal with a nation Boteach believes is genocidal. “Cory could never have expected me, in the name of friendship and loyalty, or political access, to remain silent on an issue that involved incitement for genocide.”

Booker declined to comment on Boteach’s claims and has avoided speaking publicly about the state of his relationship with the New Jersey rabbi.

Boteach said he was “surprised and shocked” by Booker’s decision to back the nuclear deal. He was also disappointed at what he saw as his friend’s refusal to meet with Israel’s ambassador to Washington Ron Dermer, another Oxford friend of Boteach, to discuss the deal or to sit down with Nobel laureate Elie Wiesel, who also opposed the agreement. But Booker did, in fact, speak to Dermer, albeit by phone, before the making his decision and according to sources close to him discussed the issue with a broad range of experts and activists.

Several months later, Booker published his book “United: Thoughts on Finding Common Ground and Advancing the Common Good.” Boteach was not mentioned in it, nor were other Jewish friends and supporters. The rabbi claimed this was not an accidental oversight. “It’s not as if something inconsequential came between us, and if he’s feeling a little bit upset and feels the need to kind of omit some of the Jewish influences while he processes the disappointment from most sectors of the Jewish community, he’ll get over it, he’ll get over it,” said Boteach.

“The book is not about my relationships with lots of friends or even different communities,” Booker responded in a Huffington Post interview. “He certainly was impactful,” Booker said of Boteach. “It’s not about that. It’s a book about a specific path. I am not sure why he’s reacting the way he is.”

The Booker–Boteach dispute also presents a broader question for the Jewish community: Do years of support, both political and financial, of a politician entail a promise in advance that he will side with the community on key issues with broad national impact?

“What Shmuley did to Cory publicly — to claim that he owes something to the community because they raised money for him — that’s something very difficult,” said Karp, who helped Booker fundraise within the community of Jewish donors during Booker’s first run for mayor in Newark. “The people who raised money for Cory did a wonderful thing when they raised him to office, but if they thought there is a quid-pro-quo, they are mistaken.”

Boteach prides himself on having introduced Booker to the Jewish community two and a half decades ago. It’s a role that no one denies he played. But Boteach denies the claims there was ever any kind of trade off in the relationship. The expectation that Booker would vote against the deal, said Boteach, was based on values, not on political backing. “My job as his rabbi and my job as a spiritual mentor is to be honest with him about where both of us stand and remind him of what his values are always, and I think this is the job of the Jewish community as well,” Boteach said.

Feldman, who has remained close to both sides of this dispute, believes their friendship is now in a period of “suspended animation” and said he is certain the future promises a Boteach–Booker reconciliation. A key obstacle, however, is Boteach’s close ties to GOP mega-donor Sheldon Adelson, who backed the rabbi’s failed congressional run in 2012. “Cory has to be sure that [Boteach] does not become aligned with Adelson,” Feldman said.

The Bromance Ends: What Split Cory Booker and Shmuley Boteach?