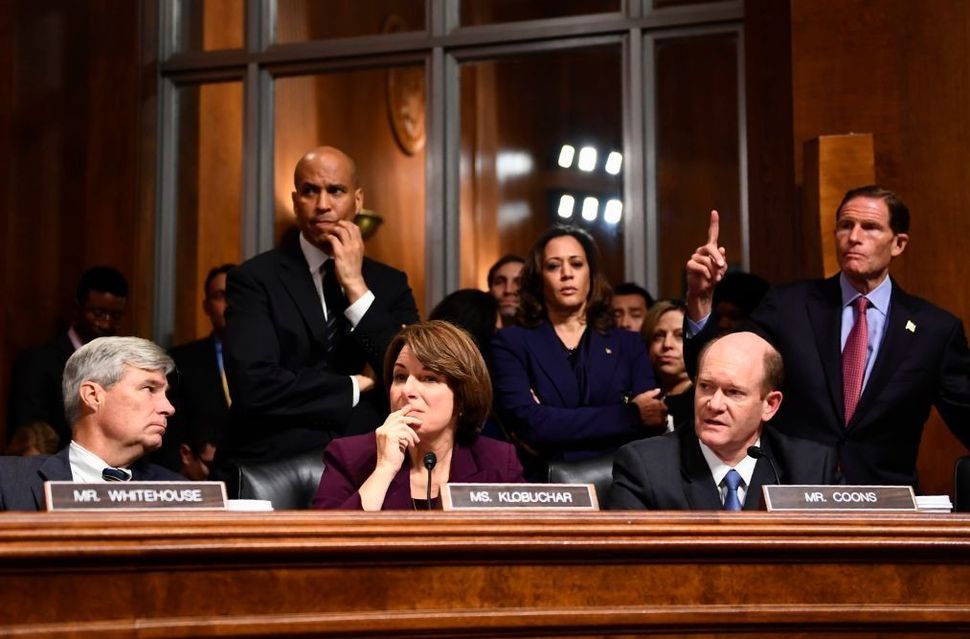 Senate Judiciary Committee members (L-R) Sheldon Whitehouse, Cory Booker, Amy Klobuchar, Kamala Harris, Christopher Coons, and Richard Blumenthal look on during a hearing on Capitol Hill in Washington, DC on September 28, 2018, on the nomination of Brett M. Kavanaugh to be an associate justice of the Supreme Court of the United States. - Kavanaugh’s contentious Supreme Court nomination will be put to an initial vote Friday, the day after a dramatic Senate hearing saw the judge furiously fight back against sexual assault allegations recounted in harrowing detail by his accuser. Image by Getty Images

On Monday night, the United States Senate voted to advance a bill that will quash free speech in the name of supporting Israel. It’s just one more sign that Israel-Palestine is being used as a potent weapon in today’s political arena.

The bill is S. 1, aka the “Strengthening America’s Security in the Middle East Act of 2019.” S. 1 was introduced by an all-GOP set of sponsors back on January 3. A grab-bag of Israel and Middle East-related measures, it also includes the “Combating BDS Act,” a controversial bill which would grant federal cover to laws passed by U.S. states that, in the name of supporting Israel, require companies and even individual contractors to sign away their right to engage in boycotts of Israel or its settlements.

The ACLU says these state laws are unconstitutional. Federal judges in Kansas and Arizona agree. So do constitutional law scholars and free speech experts.

But AIPAC and its fellow travelers, both in the GOP and among hardline pro-Israel forces, reject such views, albeit with arguments that stand up poorly to fact-checking. Instead, they have been framing these state laws, and S. 1, as political litmus tests of pro-Israel bona fides.

For the past three weeks, Senate Democrats, with the notable exceptions of Senators Dianne Feinstein, Patrick Leahy and Bernie Sanders, avoided dealing with the substance of S. 1, arguing instead over its timing and insisting on the impropriety of dealing with any business until the government was re-opened.

Now, with the government open again, Senate Majority Leader Mitch McConnell has, predictably, made S.1 the first item on the Senate’s agenda.

In doing so, McConnell, the GOP, and pro-Israel hardliners have set a political trap for congressional Democrats. Anyone who opposes the bill will be labeled anti-Israel and even anti-Semitic.

And yet, those who support the bill will be betraying the free speech rights of American citizens. And not only that; they will betray truly progressive elements in their own party, enraging the growing part of the progressive wing that is no longer willing to tolerate the political hypocrisy and cognitive dissonance of those who are progressive on all issues except Israel.

Senate Democrats are caught between a rock and a hard place. And it’s not the first time. We’ve seen this movie before.

Solidarity with the Palestinians, criticism of Israel, and support for free political speech, including in the form of boycotts, have in recent years been weaponized to attack the most significant progressive grassroots political movements, like Black Lives Matter and the Women’s March.

Legitimate disagreements about Israel have been inflated, inflamed, and cynically repurposed as political cudgels wielded to fracture progressive unity and organizing.

With S. 1 and the Combating BDS Act (and no doubt coming soon, a re-upping of the brazenly unconstitutional Israel Anti-Boycott Act) McConnell and friends are now working to undermine democratic freedoms and further codify a definition of pro-Israel that is as anathema to the real interests of Israel as it is to the American Constitution.

And as important, they are manufacturing a false binary, a “with-Israel-or-against-Israel” debate, designed to divide Democrats, to quash debate, to delegitimize and marginalize powerful emerging progressive voices, and to fracture and weaken the progressive grassroots.

Progressive leaders and elected officials can break this false binary, but only by acting with courage and conviction, re-claiming the moral high ground by affirmatively and unapologetically defining “pro-Israel” in terms that uphold liberal values, protect free speech and defend the legitimacy of differences of opinion among progressives when it comes to Israel-Palestine.

Unless and until they do, progressives will be caught between the same rock and hard place, time and again. So long as the likes of McConnell, AIPAC, Sheldon Adelson and Benjamin Netanyahu are allowed to dictate the limits of acceptable discourse and opinion on Israel, and to impose a definition of “pro-Israel” that is inconsistent with liberal values, progressives are preordained to get hammered politically.

Monday’s vote wasn’t a final vote on S. 1. And yet, the vote did suggest that progressive Democrats are beginning to understand how Israel and BDS are being used to manipulate them into betraying their values and undermining their own cause. 19 Democratic Senators voted “no” on S.1, including three presidential contenders — Gillibrand, Sanders and Brown. And equally notable on a vote of this nature and profile, two other presidential contenders, Kamala Harris and Corey Booker were no-votes.

While not a wholesale rejection of the false binary that seeks to force progressives into a zero-sum choice between defending their values and supporting Israel, this was a promising start. It suggests that it may not be naïve to hope that progressives can grow stronger and more united in standing with their values and their voters, and in so doing, free themselves entirely from the “with-Israel-or-against-Israel” trap.

This story has been updated.