The Hypocrisy Of Lee Zeldin’s Attack Against Ilhan Omar 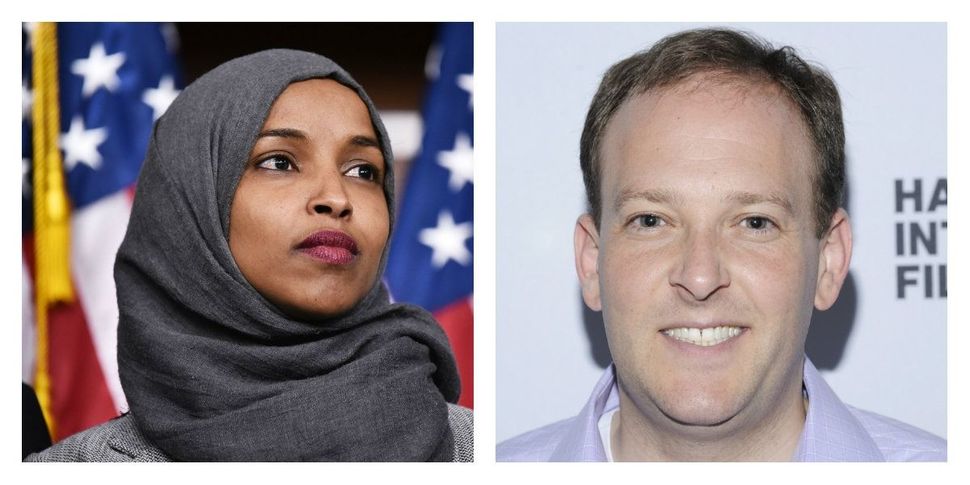 On Friday, Congressman Lee Zeldin took to Twitter to release a reprehensible, vile, and hateful anti-Semitic voicemail he received from someone who targeted him for his Jewishness.

This new VM just came into my office. @IlhanMN, this is just another day in my world as an American Jew in Congress. Would love to know what part of this hate filled, anti-Semitic rant you disagree with? I disagree with all of it. Do you? pic.twitter.com/4WoJqiATCf

There is no question that as a victim of threats and bigotry, Zeldin had a right to expose this violation. But what he did next violated the laws of common decency — as well as betraying something deeply sinister. Rather than using the ugly voicemail as an opportunity to create solidarity, Zeldin used it as a cudgel with which to beat freshman Congresswoman Ilhan Omar.

In the same tweet, Zeldin demanded that Omar publicly state that she disagree with every part of the voicemail, which she promptly did.

This is heinous and hateful. I too am flooded with bigoted voicemails and calls every day.

Maybe we could meet and share notes on how to fight religious discrimination of all kinds?

Maybe over Somali tea, in your old office which I happen to be in now. https://t.co/FQ909kYSwo

He then took it one step further, implying that if she didn’t vote for legislation penalizing boycotting Israel which many have called unconstitutional, that he would regard her as a hateful anti-Semite.

Let’s do that! Are you saying you disagree w/everything said in that voicemail? I sure do & it would be great if you did as well & cosponsored & helped #PassHRes72. That would be a step in the right direction. https://t.co/RYIqDN5Mby

There is so much wrong with this. For starters, why would Omar be responsible for a random anti-Semitic voicemail on his phone? The idea that this should be laid down at her doorstep is both racist and Islamophobic. Omar is black and a Muslim, two groups of people who are routinely approached with the unreasonable demand that they denounce this or that person or be smeared as an anti-Semite.

Omar, whose name was not mentioned once in the voicemail, is not responsible for the actions of the caller. Omar does not have a relationship with this person. Omar is not inviting this person to events or promoting this person’s statements.

And Omar has never once advocated for the oppression — systemic or otherwise — of Jews in America or in Israel. The worst that can be said about her is that she supports BDS, the boycott of Israel, and that she once wrote a poorly worded tweet about Israel, which she has since apologized for.

The same cannot be said for Zeldin, making his comments doubly offensive for their hypocrisy. Zeldin may wax poetic about the importance of denouncing hatemongers now, but Zeldin invited Hungarian white supremacist Sebastian Gorka — who literally belongs to a Nazi-affiliated party — to speak at his campaign kickoff rally. He also invited Steve Bannon, another white supremacist, to speak at a fundraiser for his campaign.

I understand that people often have complex relationships with unsavory people, but this is a level of support for anti-Semitism enablers that Omar has never shown, even in her admittedly problematic tweet.

That’s not even the worst of it. Zeldin initially supported Trump’s travel ban against Muslims, which banned Somalis from entering the country. How is it that he’s not ashamed to accuse her of bigotry, given his support for a bigoted measure that smeared the entire population of her birth country as terrorists?

Omar has made missteps, but Zeldin’s decisions cannot be reduced to unfortunate word choices. He routinely endangers people of color, Muslims, and American Jews by associating with people who hate these groups and by advocating for their oppression.

What hypocrisy, to demand that someone denounce anti-Semites when you actively promote and praise America’s most vile and influential anti-Semites. And what unmitigated gall, to coerce someone into supporting anti-BDS legislation in the name of fighting bigotry, all the while dangling the threat of further smearing that person as an anti-Semite if they refuse.

Zeldin’s hypocrisy has exposed the true reason Republicans are so keen on these anti-BDS bills: They allow Republicans to falsely smear their adversaries as bigots.

Since state-level anti-BDS laws can apply to individuals who are independent contractors, these laws can be used to infringe upon the right to free speech and the right to protest. Worse, they would disproportionately apply to people of color and Muslims, who already experience systemic oppression and criminalization in the United States.

Furthermore, the concept of boycotting oppressive states has precedence; it’s not a new invention that was created just for Israel. The concept of academic, cultural, tourism, and financial boycotts was applied in South Africa during apartheid. Of course, there are anti-Semites who are part of the BDS movement — just as there are anti-Semites in almost every movement. This doesn’t change the fact that there are reasonable arguments against anti-BDS legislation.

If Omar wants to vote against it, she should.

And we should make sure she isn’t smeared as an anti-Semite if she does.

The Hypocrisy Of Lee Zeldin’s Attack Against Ilhan Omar