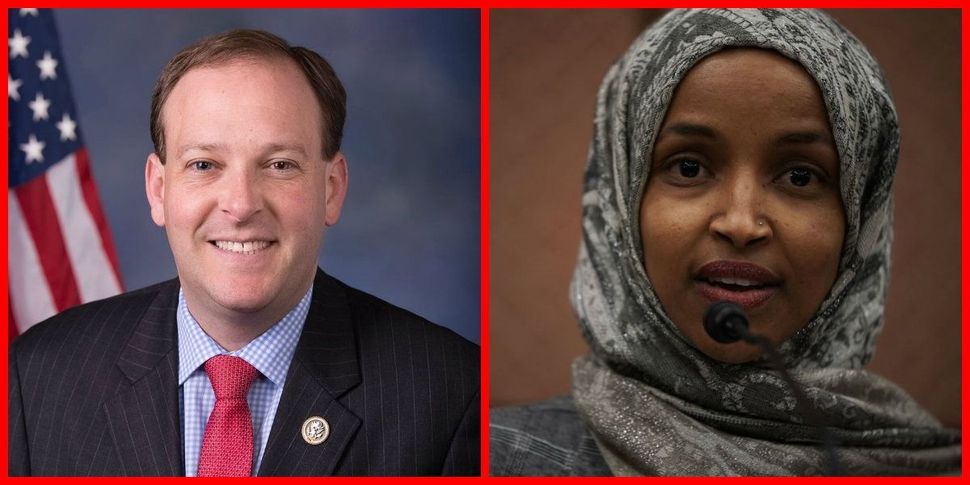 It’s not quite the 1856 Brooks–Sumner Affair, when a pro-slavery congressman nearly beat to death an abolitionist senator with a cane. But Reps. Ilhan Omar of Minnesota and Lee Zeldin of New York have not been afraid the past two weeks to have a war of words.

Omar, a Democrat who this year became the first Muslim woman elected to Congress, has been criticized by many Jewish groups for her support of the boycott, divestment and sanctions (BDS) movement against Israel and her 2012 tweet claiming that Israel had “hypnotized the world” — which many found to be anti-Semitic and for which she apologized in January.

Zeldin, one of two Jewish Republicans in Congress, was one of those critics, but he went a step beyond most others: He introduced a congressional resolution last week condemning against anti-Semitism – which specifically singled out Omar’s 2012 tweet, as well as remarks by her fellow Muslim Rep. Rashida Tlaib. (A similar resolution condemning white supremacism was passed after Rep. Steve King publicly questioned why that movement was offensive).

Soon after introducing the anti-Semitism resolution, Zeldin took to Twitter to brag that he had been named to a top subcommittee of the House Foreign Affairs Committee – then decried that Omar was also being named to the committee. “Crazy to watch what House Dems are empowering/elevating,” he tweeted.

Was just selected as Ranking Member of the @HouseForeign Subcommittee on Oversight & Investigations! Just learned Freshman Rep. Ilhan Omar was also put on this committee w oversight of US foreign policy. Crazy to watch what House Dems are empowering/elevating.

Omar quickly responded by retweeting several messages critical of Zeldin, including one that called him Islamophobic. Zeldin has expressed support for President Donald Trump’s ban on entry into the United States from certain Muslim-majority nations.

Don’t mind him, he is just waking up to the reality of having Muslim women as colleagues who know how to stand up to bullies!

It’s gonna be fun watching him lose his marbles ? https://t.co/FPEtcxW4GN

Which in turn led to a response from Zeldin:

Those poor innocent ISIS fighters & Palestinian terrorists right? Give me a break! That’s a problem no matter your religion or gender Ilhan. Your anti-Semitic & anti-Israel hate is strong & wrong & those terrorists have US blood on their hands as well. https://t.co/yVmS6Tdd8T

Which led to an Ariana Grande quote:

But things escalated even further after Zeldin’s office received an anti-Semitic voicemail calling the congressman “worse than Hitler” and said “you people” – presumably Jews – were “maggots” and “animals.” Zeldin shared it in a tweet on Thursday, asking Omar if she condemned it. Omar said she did, and invited him to her office for tea to discuss religions discrimination. Zeldin accepted, but the following day, he offered a caveat:

I’ll meet w/any colleague GOP/Dem to discuss anything, but w/out apology I’ll NEVER stand by while Members advocate pro-BDS, anti-Israel hate, leniency for ISIS fighters, prop up Maduro in Venezuela & now a 90% income tax rate. Not on my watch. #PassHRes72https://t.co/dj6LYxzOLJ

The saga is likely to continue – especially given growing controversy a recent interview in which Omar compared Israel to Iran and said she “chuckles” when she hears the Jewish state being referred to as a democracy. Expect sparks to fly during hearings of the Foreign Affairs Committee.

Correction, 3:20 p.m.: A previous version of this article stated that a House resolution against white supremacy did not mention Rep. Steve King. In fact, that resolution did mention King.