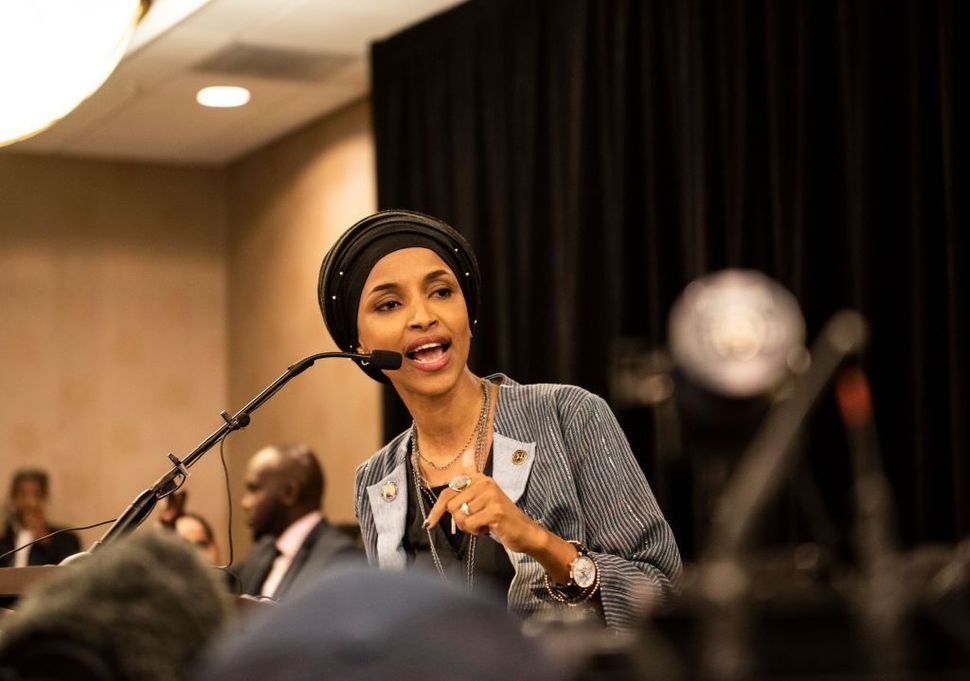 When I think about the election of Minnesota Democratic Rep.-elect Ilhan Omar, I have mixed feelings. On one hand, her election is a milestone: she is the first Somali-American Muslim woman elected to Congress and a strong supporter of Palestinian human rights in a Congress that often sees them as an afterthought.

But on the other hand, some of her the rhetoric on Middle East issues has been needlessly divisive, promoting ethnic and religious enmity between Jews and Muslims instead of promoting a peace and just resolution to the Israeli-Palestinian conflict.

“Israel has hypnotized the world, may Allah awaken the people and help them see the evil doings of Israel,” she tweeted in November 2012, during a bout of violent conflict between Israelis and Palestinians.

Her comment both demonized Israelis and cast a religious veneer on the conflict; it also came close to anti-Semitic rhetoric used by some to suggest Jews or Israelis have conspiratorial power over the world. Although it likely came from anger over a conflict that was taking too many lives — mostly Palestinian, but also far too many Israelis — it simply wasn’t the right way to promote peace.

I should know. I once made the same mistake.

Six years ago, I briefly went from being a reporter to the center of the story. I was working as a blogger at the Center for American Progress weblog ThinkProgress.

On a number of occasions, I referred to (mostly non-Jewish) opponents in Twitter debates over the Middle East as “Israel Firsters.”

These Tweets caught the eyes of a number of CAP’s pro-Israel critics who complained that ThinkProgress was unduly critical of Israel. In those days, the political left was far less settled on the question of Israel-Palestine, and the positions we had staked out at ThinkProgress made us an anomaly on the progressive left.

I ended up leaving CAP shortly after this controversy, partly due to the scrutiny I had received over the issue of Israel, and partly due to unrelated reasons.

I was wrong to write those tweets and discuss the issue in this way. Nationalism is a perverse basis from which to discuss this issue. There is nothing wrong with favoring the point of view of a foreign government over that of your own. We should be arguing ideas, not allegiances; principles, not people. And we should be respecting the sensitivities of those on the other side of the debate, especially when they come from a place of inter-generational trauma.

In general, we should err on the side of having sympathy for our opponents. One of the major mistakes we make in politics is believing that we are righteous and our ideological opposites are immoral. The reality is, most of the time they are just as convinced of the righteousness of their position as we are of ours. Our political beliefs are formed much the same way as any any of the other ideas in our head: through a combination of genetics, upbringing, and environment.

Chances are, the person you’re arguing with so ferociously about any given topic loves their family, is a responsible citizen, and might just get along great with you in an non-political setting.

In other words, in our political discussions, we often adopt a frame of sectarianism, where it is our group versus the other. But life isn’t a battle between good and evil people. It’s a battle of mostly good people with very different convictions, formed by different social networks and circumstances. The political left understands this when it talks about the economy or criminal justice – it aims not at the “sinners” of the impoverished or the criminals, but the “sins” created by inequality and various social systems that produce anti-social behavior.

This humanist framework should also be applied to the interfaith work it will take to end the occupation of the Palestinians and ensure safety and security for Israelis.

Omar has already shown she is willing to break the Congressional taboo against criticizing Israel for its treatment of the Palestinian people. She should be applauded for doing so, because only by adopting a balanced policy that holds both sides accountable can we achieve a just peace.

But the issue carries a great deal of sensitivity on both sides, and we have to be careful when trying to bring the sides together.

Omar announced shortly after being elected that she is a supporter of the Palestinian-led Boycott, Divestment, and Sanctions movement, despite telling people during her campaign that she doesn’t support it.

As an elected official, she has an obligation to consult with her constituents before taking such a controversial stand. Many of her Jewish constituents are understandably upset, believing that she was not upfront about her stance.

If I was Omar, I would immediately and publicly explain my thinking about why I wrote that 2012 tweet, and apologize to my Jewish constituents. I would then promise to make decisions about this highly contentious issue in a transparent way that includes advice and dialogue from and with all of her constituents: Jewish, Muslim, Christian, and everybody else.

We live in an increasingly polarized country, but remarkably, most of that polarization is not based on our positions on the issues. Research shows the main thing that drives Americans apart is how strongly they affiliate with one tribe or party, not their actual beliefs; the large majority of people are actually somewhere in the middle on most issues.

Omar cannot make the same mistake I did of affiliating so strongly with one group — pro-Palestinian activists — that she is unable to talk to the other side and understand that they are mostly good people who simply have different convictions.

In both the United States and Israel-Palestine, at the end of the day we have to live peacefully and amicably with those with whom we disagree.

As much as I may disagree with pro-Israel activists, I have committed myself to not demonizing them or their concerns, and if Omar is truly going to be the effective and courageous advocate I know that she can be, she should do the same.

Zaid Jilani is journalist originally from Atlanta; he has worked as a reporter for The Intercept and as a reporter-blogger for ThinkProgress, United Republic, the Progressive Change Campaign Committee, and Alternet. He is currently a writing fellow researching and writing on social and political polarization at UC Berkeley’s Greater Good Science Center.