Alexandria Ocasio-Cortez Flip-Flopped On Israel. Ilhan Omar Did Not. 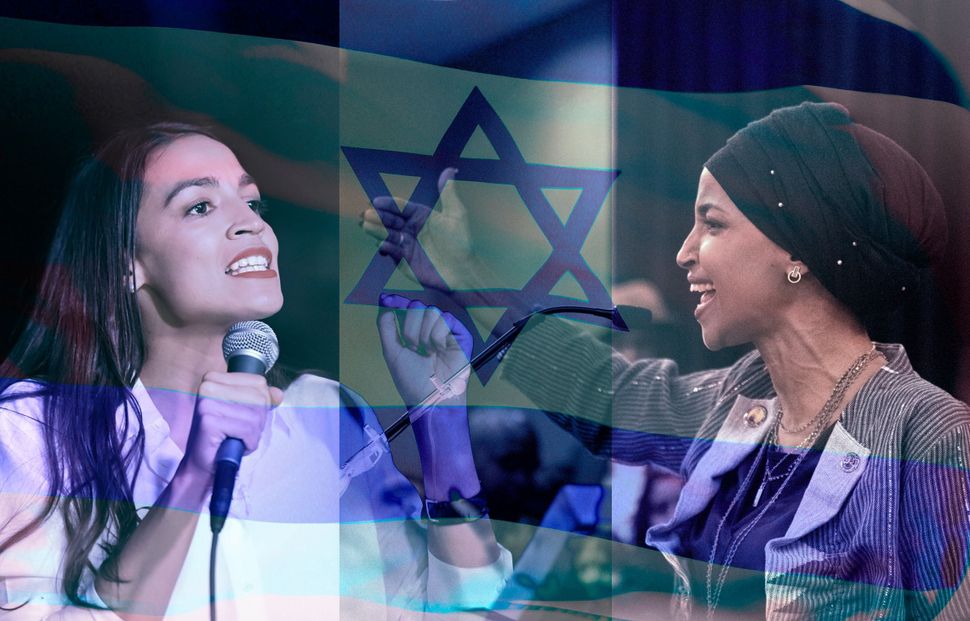 Three of the Democratic Party’s new members of Congress have already made waves for their willingness to criticize Israel: Alexandria Ocasio-Cortez of New York, Rashida Tlaib of Michigan and Ilhan Omar of Minnesota.

After endorsing a two state solution to the Israeli-Palestinian conflict, Ocasio-Cortez backtracked in response to pressure from the left, refusing to say she was in favor of two states in an interview with Amy Goodman. Similarly, Tlaib began her race with an endorsement from J Street and the conviction that the two state solution was the best option. But after pressure from the left, she came out in favor of withdrawing aid from Israel and in support of a one state solution.

Ocasio-Cortez and Tlaib seemed to be joined this week by a flip-flop from Omar, on the subject of the boycott of Israel. In an article published on the website MuslimGirl.com, Omar seemed to come out in support of the BDS movement:

“Ilhan believes in and supports the BDS movement, and has fought to make sure people’s right to support it isn’t criminalized. She does however, have reservations on the effectiveness of the movement in accomplishing a lasting solution.”

The comment made waves not only because Omar will be the first member of Congress to support the boycott, but because the statement appeared to contradict an earlier one that Omar made about BDS during a primary debate in a synagogue.

“I believe right now with the BDS movement, it’s not helpful in getting that two-state solution,” she said. “I think the particular purpose for [BDS] is to make sure that there is pressure, and I think that pressure really is counteractive. Because in order for us to have a process of getting to a two-state solution, people have to be willing to come to the table and have a conversation about how that is going to be possible and I think that stops the dialogue.”

Many have since seen in Omar’s change of heart a betrayal — including some Jews who voted for her. Many in the Jewish community view BDS as an anti-Semitic attempt to delegitimize the world’s only Jewish state, and see support for BDS as tantamount to depriving Jews of the right to self-determination.

And yet, unlike Ocasio-Cortez and Tlaib, who bowed to pressure from the left to abandon a call for a two state solution, Omar did not.

And not because there wasn’t pressure. Muslim Girl notes that Omar “has been criticized” for saying “that she supports a ‘two-state solution’ and [that] BDS is ‘not helpful in getting that two-state solution.’”

Despite her statement, it’s clear that Omar’s support for the BDS movement isn’t a call for a single, non-Jewish state where Israel is. She still believes in a two state solution — one for Jews, one for Palestinians.

In fact, Omar herself doesn’t see any conflict between her remarks in the synagogue and her remarks to Muslim Girl, as made evident by a text message exchange with a journalist who asked her about it:

“My position has always been the same,” she wrote. “I believe and supports the BDS movement, and have fought to make sure people right to support it isn’t criminalized [sic],” she wrote.

This is why she voted against a bill that sought to ban the state from doing business with entities that are pro-BDS, she explained.

“I do, however, have reservations on the effectiveness of the movement in accomplishing a lasting solution,” she insisted in the text message — just as she did to Muslim Girl and to the audience in the synagogue.

I can see why this looks like support for the boycott; she does literally say she supports it. And yet, there’s a sense in which seeing in her statement to Muslim Girl a contradiction to her earlier statement doesn’t quite make sense.

Omar has not responded to my requests for comment, so I don’t know her answers to these questions. But to me it seems that Omar does not herself endorse the boycott so much as stand in solidarity with other boycotters and their First Amendment rights. To me, her “belief in” and “support” for “the BDS movement” is support for the movement, rather than the cause; in other words, it is support for those engaged in the boycott campaign. After all, she has specifically emphasized three times that she does not support the cause itself.

This may seem like nitpicking. And yet, this reading is the position taken by Tlaib and Ocasio-Cortez. Though Ocasio-Cortez and Tlaib are both members of the Democratic Socialists of America, an organization that has endorsed the call to boycott Israel, neither one personally supports the boycott.

When asked if she supports BDS, Tlaib answered that she supports free speech. “I‘m an ACLU card member,” she said. “I stand by the rights of people who support BDS.”

And in an interview with Errol Louis, Ocasio-Cortez made the same move.

It’s no doubt possible that Omar meant to express to MuslimGirl a previously suppressed belief that boycotting Israel is a good idea; that’s certainly the literal interpretation of her statement and the text message. And yet, it’s also clear that she doesn’t think BDS is an effective strategy, and that she does support a Jewish state.

The meaning, admittedly buried, in Omar’s statement is the same meaning conveyed by Ocasio-Cortez and Tlaib: Boycotts are not the way, but boycotters’ civil rights are paramount.

One reason many may have been eager to accept her support for BDS is because of another tweet Omar wrote in which she accused Israel of hypnotizing the world.

The tweet utilizes, perhaps unconsciously, the anti-Semitic trope of Jews having supernatural powers.

But BDS — a political strategy — is a far cry from the bigotry embedded in this trope, however unconscious. And the fact remains that Omar doesn’t believe in the efficacy of BDS, which she’s been consistent about.

Rather than a flip-flopper, Omar remains the only one of the three new voices in Congress willing to criticize Israel that has maintained consistency throughout, displaying a courage and conviction that others did not.

I hope she clarifies this statement as well as the previous one about Israel’s hypnotic powers. But I think that these clarifications will soothe, rather than further upset, her Jewish constituents.

Alexandria Ocasio-Cortez Flip-Flopped On Israel. Ilhan Omar Did Not.