These Women Of Color Are Poised To Make History In Congress. But What Does It Mean For Israel? 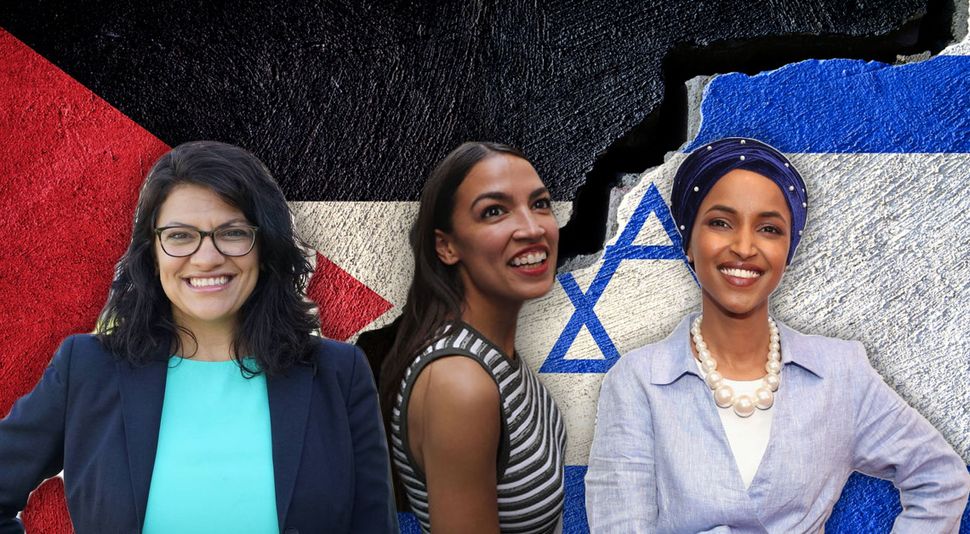 In a year full of distressing political episodes, one phenomenon has inspired hope: a crop of young, progressive women of color winning Democratic primaries in shoo-in Democratic constituencies — meaning they will most likely be heading to Congress.

Earlier this year, Alexandria Ocasio-Cortez won in New York’s 14th congressional district, defeating longtime incumbent Joe Crowley. Last week, Rashida Tlaib, a Palestinian Muslim, won her primary in Michigan, where she will run unopposed in a general election to become the first Muslim woman in congress. And as of Tuesday night, she will be joined by Ilhan Omar, a Somali refugee and Muslim, who won her primary in Minnesota and is expected to win the general election in her staunchly Democratic district.

But these women share more than just progressive bona fides and identities as women belonging to minority groups. They have all in one way or another run into problems when it comes to their views of Israel. All three women have questioned Israel in more — and less — legitimate terms.

For these opinions they have faced criticism from the Jewish community. And yet, the Jewish community itself is engaged in a reevaluation of its relationship with Israel, questioning the extent to which Israel deserves unconditional support in light of its increasing inequality, increasing ultra Orthodoxy, and increasingly ethnocentric nationalism as expressed by the recent Nation State bill.

In fact, the debates surrounding these new candidates reflect those happening within our own community.

Ocasio-Cortez was the first to face censure for her views on Israel. During the Gaza protest this March, she tweeted, “This is a massacre. I hope my peers have the moral courage to call it such.”

Ocasio-Cortez later insisted in an interview on PBS that she believes “absolutely in Israel’s right to exist” and supports a two state solution, which earned her immediate censure from the left, though she also criticized Israel’s occupation of the Palestinian territories.

In the wake of this criticism, when asked by Amy Goodman the week after her PBS interview whether she’d still say she supported a two state solution, she demurred.

Tlaib went through a similar experience. Though she identifies strongly with her Palestinian heritage (“A lot of my strength comes from being Palestinian,” she said at one point), she drew the ire of some Palestinian activists for an endorsement from the pro-Israel, pro-peace lobbying group J Street.

“She supports all current aid to Israel and the Palestinian Authority,” reads a profile of Tlaib on J Street’s website. “Tlaib does not support the expansion of settlements and believes that they make it difficult to reach a sustainable two-state solution.”

Ali Abunimah, founder and editor in chief of Electronic Intifada, criticized Tlaib for this position. “This means that notwithstanding her emphasis on ‘humanitarian’ aid, Tlaib supports all current US military aid to Israel,” he wrote in an article about why he could not join the parade celebrating the first Muslim and Palestinian woman in congress. “This means that Tlaib supports the U.S. funding or supplying the bullets that Israel has been using to kill and maim thousands of Palestinians during the Great March of Return protests in Gaza.”

Tlaib seemed to balk at Abunimah’s criticism. But just a few days later, she also walked back the support for U.S. aid to Israel that J Street had attributed to her in an interview.

“U.S. aid should be leveraged,” she said. “I will be using my position as a member of Congress to say no country, not one, should be able to get aid from us the American people” if they promote injustice and inequality.

And in another interview, Tlaib was very clear that she supports a one state solution, not a two state solution. “One state,” she said. “It has to be one state. Separate but equal does not work.”

Many on the right will no doubt take issue with the fact that Tlaib and Ocasio-Cortez will not be supporting Israel unconditionally. And yet, neither are many American Jews willing to do so — not anymore.

Just this past Monday, billionaire and erstwhile backer of Israeli Prime Minister Benjamin Netanyahu Ronald Lauder published a second, scathing attack against Israel in The New York Times. “All over the world, and especially in North America, Jewish millennials are raising doubts that their parents and grandparents never raised,” wrote Lauder. “The commitment to Israel and Jewish institutions is not unconditional.”

Indeed, Lauder is joining this younger generation with his newly formed skepticism of Israel. He joins young Jews angry at Israel’s treatment of the Palestinians and an older generation that feels belittled by the ultra Orthodox monopoly.

All across the United States, American Jews are reevaluating their relationship with Israel — just like these new politicians.

What the Jewish diaspora community needs from its elected officials is no longer unconditional support for Israel; it’s fair criticism.

And it’s what they are going to get from someone like Tlaib, a Palestinian woman committed to civil rights and fighting inequality. As Tlaib put it elegantly in that interview, we should be “choosing a value versus choosing a side — Palestine versus Israel.”

Interestingly, though Ocasio-Cortez and Tlaib are both members of the Democratic Socialists of America — an organization that has endorsed the call to boycott Israel — neither one personally seems to support the boycott.

When asked if she supports BDS, Tlaib answered that she supports free speech. “I‘m an ACLU card member,” she said. “I stand by the rights of people who support BDS.”

And in an interview with Errol Louis, Ocasio-Cortez made the same move.

Omar, too, recently said in a town hall meeting that she opposes BDS — because it gets in the way in another thing she supports: the two state solution.

“The BDS movement — it’s not helpful in getting that two state solution,” she said. “That stops the dialogue.”

As for why she supports a two state solution, she said it’s “important for us to recognize Israel’s place in the Middle East and the Jewish people’s rightful place within that region. It’s also important for us to make sure that we are going through a process where we’re guaranteeing that to the Palestinians.”

This position reflects the views of the majority of American Jews.

But Omar has in the past said things that do not reflect those views.

In a tweet from 2012, Omar lamented how “Israel has hypnotized the world.”

Defending that tweet in May of this year, she wrote also on Twitter that “drawing attention to the apartheid Israeli regime is far from hating Jews.”

Drawing attention to the apartheid Israeli regime is far from hating Jews. You are a hateful sad man, I pray to Allah you get the help you need and find happiness. https://t.co/SvEXjlxlEN

Speaking of Israel as having a hypnotic power over the world evokes the anti-Semitic trope of Jews using mystical power to control the universe. And justifying the use of that trope by saying it was about Israel, not Jews, will not make many Jews feel better about it. Israel is, after all, the world’s only Jewish state, and frequently, if not always, a stand in for anti-Semitic tropes of yore.

And yet, if we exert the same amount of energy decrying Ocasio-Cortez and Tlaib for calling out Israel’s actual crimes — the inequality, the killing of unarmed civilians, the occupation — as we do against an anti-Semitic trope, we are not only being disingenuous; we are cheapening our outrage for the times we’ll need it most.

It is crucial to draw a moral line in the sand between acceptable and unacceptable criticism of Israel.

It’s this very conversation we’re having in our own community.

How much aid should the U.S. be giving Israel? Should people who care about Jewish and Palestinian self-determination be pushing for a one or a two state solution? Should BDS advocates be allowed to push their agenda unencumbered? In an age when Israel’s democracy is facing challenges from within, what is America’s role?

These are all questions that the Jewish community is currently grappling with – just like these new soon-to-be congresswomen. It seems wrong to hold them to a higher standard than we hold ourselves.

Rather than piling on these young women of color with their historic victories, we should be recognizing in their stances the fault lines within our own community, insisting on the crucial distinction between legitimate, and illegitimate criticism of Israel.

Batya Ungar-Sargon is the opinion editor of the Forward. She can be reached at [email protected] Follow her on Twitter @bungarsargon.

These Women Of Color Are Poised To Make History In Congress. But What Does It Mean For Israel?