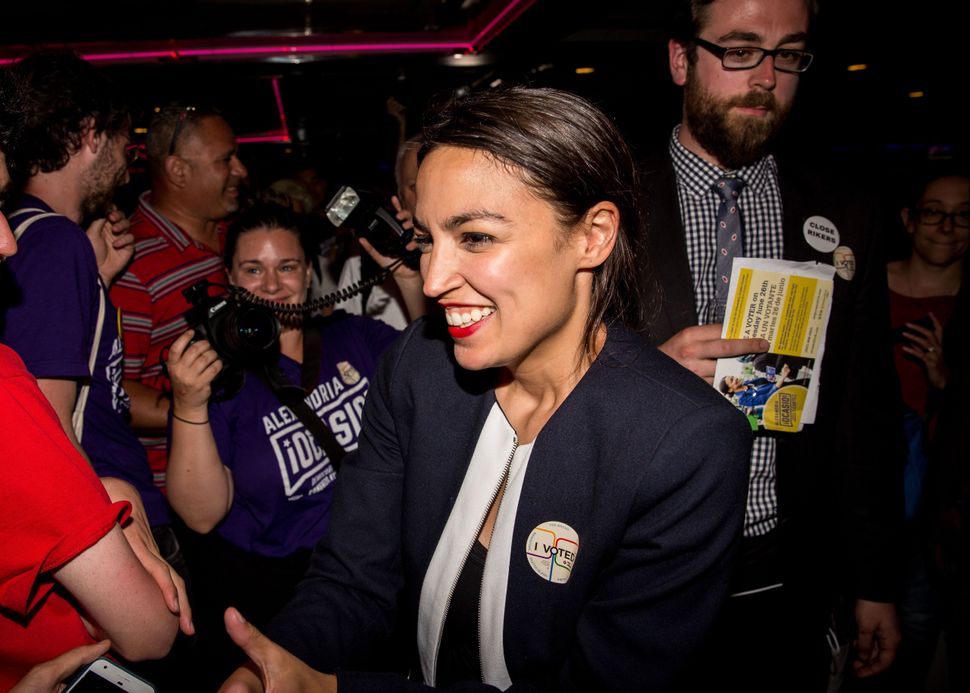 Prominent progressives like Sen. Bernie Sanders and activist Linda Sarsour are vying with each other to laud Alexandria Ocasio-Cortez, who notched a David-and-Goliath upset victory over 10-term Rep. Joe Crowley in Tuesday’s Democratic primary in New York.

Her victory — with 57% of the vote — raises larger questions about the party’s direction, including whether she won despite or because of her stinging comments about Israel on the campaign trail. Could her upset win be another sign that Democratic voters want the party to be more critical of the Jewish state?

“We’re seeing a pattern where the activist core of the Democratic Party is becoming highly critical of Israel almost as a default position,” Brooklyn College history professor KC Johnson, who has written about this shift, told the Forward on Wednesday.

Ocasio-Cortez’s campaign in a fast-changing Queens district was almost solely focused on domestic causes like “Medicare-for-All” and abolishing U.S. Immigration and Customs Enforcement. Her campaign website doesn’t mention anything about foreign affairs on its issues page.

But she did attract attention in May for calling the Israeli army’s killing of Palestinian protesters in Gaza a “massacre.”

“No state or entity is absolved of mass shootings of protesters,” she wrote in a Twitter message that got more 6,700 retweets. “There is no justification. Palestinian people deserve basic human dignity, as anyone else. Democrats can’t be silent about this anymore.”

In an interview with Glenn Greenwald of the Intercept, a left-wing news website that promoted her candidacy, Ocasio-Cortez drew parallels between Gaza and civil rights protests in America, a rhetorical turn that American Jewish groups like the Anti-Defamation League have criticized.

“Especially in New York people say this is political suicide,” Ocasio-Cortez also said. “But I had a lot of my constituents thanking me for taking that position. I had a lot of Jewish Americans who thanked me.” 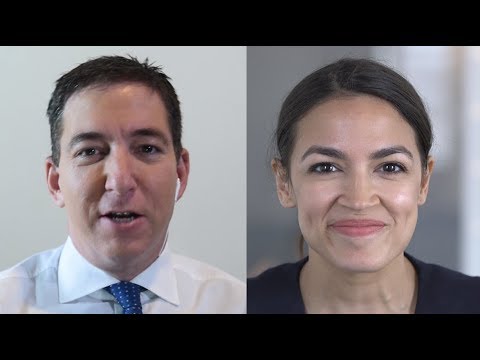 “This election cycle has brought forward a new generation of candidates running for office who are more outspoken about their opposition to the policies of Netanyahu’s far-right coalition and who are eager to see the US play a more constructive role in making life better for both Israelis and Palestinians,” J Street president Jeremy Ben-Ami said in a statement to the Forward. “We celebrate and continue to work to help create the political space for this change.”

Ocasio-Cortez’ district, New York’s 14th in northern Queens and the east Bronx, is only around 4% Jewish — a small voting bloc by New York City standards. Johnson noted that the district has undergone a profound demographic shift in the last few decades, from an enclave of Irish-, Italian- and Greek-Americans to a majority-minority district that is nearly half-Hispanic and where around 50% of the residents are immigrants. Crowley is a middle-aged white male who doesn’t speak Spanish — and like other establishment Democrats, he was circumspect about Israel.

“The left is on the move, and mainstream Democrats, in order to be successful, must stop the denial,” veteran New York political consultant Hank Sheinkopf told Jewish Insider. “Traditional urban organizations are the emperors with no clothes. This trend expedites the long-running divorce proceedings between the Democratic Party and Israel.”

The Jewish Democratic Council of America said it supports much of Ocasio-Cortez’s domestic policy agenda but disagrees with her past statement regarding Israel, as well as her affiliation with the Democratic Socialists of America, which supports the boycott, divestment, and sanctions (BDS) movement targeting Israel.

The party is moving to the left on many issues, not just Israel, Johnson said.

“One of the things we’ve seen in the surge in Democratic turnout [during the primaries] is that the Democratic base is more progressive than it was two years ago, and has a set of positions on a whole bunch of issues that are out of step with traditional Democratic positions,” he explained.

And Democratic politicians who are able to read the political winds are adjusting their positions accordingly. While this trend is usually seen on domestic issues — Sanders’ Medicare-for-All proposal has gone from a pipe dream to almost an expected progressive proposal in only a few years — it can also be seen on the Israeli-Palestinian front.

“Even Bernie Sanders, who I think for most of his career, he didn’t comment very much on Israel, and was generically supportive of Israel within mainstream positions, has within the last 6-9 months become very sharply critical of Israel,” Johnson said.

Indeed, Sanders has released three videos since April highlighting the humanitarian situation in Gaza, and last month spearheaded the first public letter from multiple senators in more than a decade to criticize Israel’s blockade. Thirteen senators signed in all, including another prospective Democratic presidential frontrunner, Elizabeth Warren.

Ocasio-Cortez was one of several Democratic House candidates to slam Israel for its treatment of Palestinians. Ilhan Omar, the frontrunner to replace Rep. Keith Ellison in a Minneapolis House district, called Israel an apartheid regime as recently as May and once tweeted, “Israel has hypnotized the world, may Allah awaken the people and help them see the evil doings of Israel.”

Other candidates to draw similar attention include Scott Wallace in Pennsylvania, who was the subject of a Forward investigation showing that his charitable foundation had given more than $300,000 to pro-BDS groups, and Leslie Cockburn in Virginia, a former journalist whose book on the U.S.-Israel relationship was characterized in a New York Times review as being “largely dedicated to Israel-bashing for its own sake.”

Of course, pro-Israel incumbents were also successful in Tuesday’s primaries.

On the same day that Ocasio-Cortez upset Crowley, Maryland Sen. Ben Cardin, one of the biggest pro-Israel stalwarts in Washington, got more than 80% of the vote in a primary beatdown of progressive challengers who are to his left on Israel and most other issues, including convicted whistleblower Chelsea Manning and peace activist Jerome Segal, who helped write the Palestinian declaration of independence.

And most other incumbents, including in districts neighboring Ocasio-Cortez’s, were able to fend off progressive challengers.

Still, the victories of many progressives in non-incumbent races means that this year’s roster of Democratic candidates is likely to be more liberal than in the past, Johnson predicted. And that could have implications for the 2020 primaries, especially if it comes down to a longtime party veteran against a young upstart.

“It’s easy to establish a situation… where the younger candidate would seize on Israel as a way of highlighting his or her progressive credentials,” Johnson said.