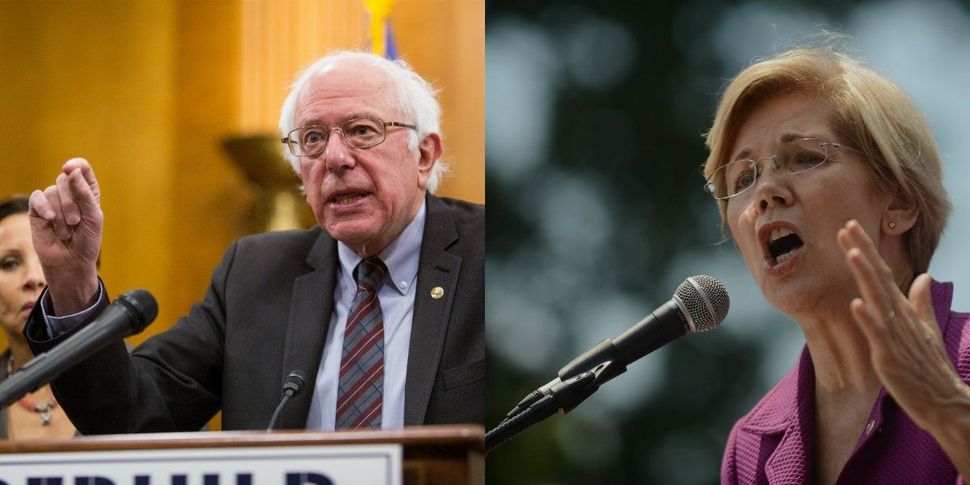 The Forward has learned that on Friday night, thirteen Democratic Senators—including Bernie Sanders and Elizabeth Warren—sent a letter to Secretary of State Mike Pompeo urging the Trump administration “to do more to alleviate the ongoing humanitarian crisis in the Gaza Strip.”

That may not sound particularly audacious. But according to J Street’s Vice President of Communications, Jessica Rosenblum, it’s the first letter signed by multiple senators challenging Israel’s blockade of Gaza since the 2006 elections that led to Hamas taking control in the Strip. And it constitutes yet more evidence that while journalists focus on the alliance between the Trump and Netanyahu administrations, that alliance is sparking far-reaching changes inside the Democratic Party. The inhibitions that have long prevented Washington Democrats from speaking about Palestinian human rights are beginning to fade.

The letter — whose existence Haaretz reported in April — is not about Israel’s killing of Palestinian protesters on Monday. It was sent before that. But it challenges both the narrative that Netanyahu and Trump officials have used to justify the massacre, and some of the Israeli policies that have made Palestinians desperate enough to charge the fence with Israel.

Israeli officials often claim, in the words of ambassador to the United Nations Danny Danon, that “We are not responsible for the well-being of the people of Gaza” because Israel withdrew its settlers from the Strip in 2005. But the letter notes that Israel maintains “continuing control of Gaza’s air, sea, and northern, southern, and eastern borders.”

And while Israeli and American officials insist that Hamas is entirely responsible for Gaza’s suffering, the Democrats’ letter — while acknowledging that Hamas “bears responsibility for the deteriorating situation” in Gaza — also blames Israel’s “restrictions on the freedom of movement of people, legitimate goods and equipment” for having “made the humanitarian situation worse.” To rectify that, it urges the United States to “encourage the easing of restrictions on the movement of people, goods and equipment in and out of the territory” and calls for the creation of a Gaza seaport that would improve “the territory’s access to goods and markets worldwide.”

Some human rights advocates wish the letter had gone further. “It’s important that members of Congress are speaking out,” the executive director of the U.S. Campaign for Palestinian Rights, Yousef Munayyer, told me. “But while there’s a need for humanitarian aid in Gaza, the proper response is to call for an end to the policies that make humanitarian aid necessary and to demand accountability for the crimes that have taken place.”

But as mild as the letter might sound, it is positively radical by the standards of official Washington. In most of Barack Obama’s major speeches on the Israeli-Palestinian conflict — in Sderot in 2008, to AIPAC and the United Nations in 2011, in his call for a two-state solution near the 1967 lines that same year, in his speech in Jerusalem in 2013 and in his speech at Adas Israel synagogue in 2015 — he didn’t mention the Gaza blockade at all. (In his 2009 speech in Cairo, Obama made passing reference to “the continuing humanitarian crisis in Gaza.”) As Zaid Jilani noted last month in The Intercept, when Obama in 2007 said “nobody is suffering more than the Palestinian people,” he encountered such fierce pushback that he was forced to clarify that “nobody has suffered more than the Palestinian people from the failure of the Palestinian leadership to recognize Israel, to renounce violence, and to get serious about negotiating peace and security.”

Democrats and their allies in Congress have been equally timid. When asked at the 2014 Netroots Conference about Israel’s war with Gaza, Elizabeth Warren hurried away without answering. At a later event with constituents, she declared that “when Hamas puts its rocket launchers next to hospitals, next to schools, they’re using their civilian population to protect their military assets…I believe Israel has a right, at that point, to defend itself”—an answer that could have been given by Ted Cruz. During the entire 2014 Gaza War, according to MoveOn executive director Ilya Sheyman, the organization didn’t issue a single statement.

But last week Warren signed the letter to Pompeo. She’s also called for Israel to “exercise restraint and respect the rights of Palestinians to peacefully protest.” And on Monday, MoveOn called “on Democrats to Demand an Immediate End to Violence Against Nonviolent Palestinian Protesters.”

What’s behind this shift? Trump and Netanyahu. Americans tend to see other nations through the lens of their own experience. South Africa was not the only terrible human rights abuser in the 1980s. But apartheid captured the imagination of American progressives because of America’s own history of racial oppression.

Progressives are growing more openly critical of Israel, I suspect, because they see Benjamin Netanyahu’s government as embodying many of the values — militarism, xenophobia and religious extremism — that they disdain in the contemporary GOP. It began during the George W. Bush administration, when Netanyahu championed the war in Iraq and linked his “war on terror” to Bush’s. It continued during the Obama administration when he schemed with Republican leaders to undermine the Iran deal. And it has reached a crescendo this month as he and Trump scuttled the Iran deal, jointly defended Israel’s killings in Gaza, and celebrated the American embassy’s move to Jerusalem in a ceremony featuring a virulently anti-Muslim and anti-gay American pastors.

Ironically, by refusing to endorse a Palestinian state, Netanyahu and Trump have also liberated Democrats to speak more forthrightly about Palestinian rights. Obama, who spent much of his presidency trying to resuscitate the Israeli-Palestinian peace process, usually couched his criticisms of Israeli policy in the language of Israeli self-interest. Israel needed to change its ways, he said again and again, because it was threatening its status as a democratic Jewish state. But as the two-state solution fades, and the prospects for an American-led peace process look ever more farcical, the paradigm for Democratic criticism of Israel has changed. The Gaza letter doesn’t even mention two states. Its focus is “basic human rights.”

This isn’t to say that the Democratic Party has become uniformly critical of Israel. It hasn’t. What it has become is a divided party. In 2001, according to the Pew Research Center, moderate and conservative Democrats sympathized with Israel over the Palestinians by a margin of 18 points. Liberal Democrats were even more favorable than that: They backed Israel by thirty points. But when Pew asked the question again this January, it found something radically different. Moderate and conservative Democrats had not changed: They still favored Israel by 18 points. But liberal Democratic opinion had been utterly transformed. Liberal Democrats now favored the Palestinians by 16 points — a swing of 46 points.

Put that polling together with the Gaza letter and you can see the outlines of the Israel debate in the 2020 Democratic primary. It’s not surprising that Sanders and Warren signed the letter but Cory Booker, Kamala Harris and Kirsten Gillibrand did not. (When I asked why some Democrats had not signed, a staffer for a different Democratic senator said the letter didn’t sufficiently criticize Hamas). More than any other national Democrat, Sanders is testing the limits of conventional Beltway discourse on Israel. Warren is moving in that direction too. Booker, Harris and Gillibrand are not. But, significantly, they’re not defending Netanyahu’s actions in Gaza. They’re staying silent. When Harris addressed the AIPAC policy conference in March, she did so off the record. That will be a challenge going into a Democratic primary in which timidity and moderation are dirty words.

We live in an age of political boundary busting. The more Trump and Netanyahu challenge the limits of acceptable discourse on the right, the more liberal Democrats will do so on the left. And for those of us who believe that talking about Palestinian human rights shouldn’t be radical at all, that offers a small source of hope.