Bernie Sanders’ Criticism Of Israel Is Radical. And He’s Taking It Mainstream 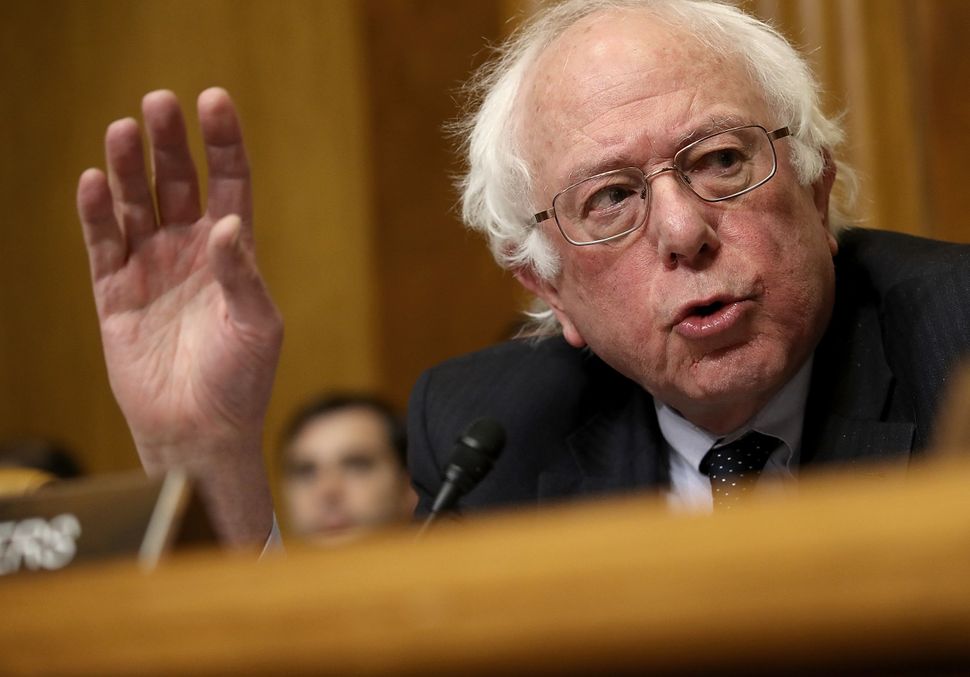 Not many in the media are noticing, which is understandable given the burden of keeping up with Donald Trump, but in the shadow of Trump and Benjamin Netanyahu, Bernie Sanders is dramatically challenging Beltway discourse on Israel.

In 2020, when Sanders likely runs for president, and journalists begin paying attention, they’re going to be shocked. The Israeli government and the American Jewish establishment will be scared out of their minds.

.@Ocasio2018’s victory is fresh evidence of the dramatic shift taking place inside the Democratic Party on Israel, which I wrote about a couple of weeks ago https://t.co/chxlJcCieG

Last month, Sanders crossed one of the red lines demarcating politically acceptable Washington discourse about Israel. He organized the first letter written by multiple senators criticizing Israel’s blockade of the Gaza Strip. Then, last week, he raced past that line again with a video that is unlike anything I’ve ever seen from an American senator.

The voices of the Palestinians are rarely heard. This is what life is like for those who are living in Gaza under a 10 year blockade: pic.twitter.com/pZHOljjDHL

To understand how radical Sanders’ video is, it’s worth remembering how liberal Democrats like Barack Obama, John Kerry and Hillary Clinton talked about Israel and the Palestinians as recently as two years ago. While Obama, Kerry and Clinton did sometimes criticize Israeli policy, they generally did so in the language of Israeli self-interest, not of Palestinian human rights. Israeli settlement policy was bad for Israel, they argued, because it threatened Israel’s future as a democratic Jewish state.

On Gaza, the Obama administration never publicly urged Israel to negotiate with Hamas, even as former Israeli security chiefs did. And Obama effectively endorsed Israel’s position that Palestinians should not be allowed to hold elections because Hamas might win. (This despite the fact that Israeli parties that oppose the two state solution — among them, Likud — run in Israeli elections all the time).

When Gaza came up in a 2016 Democratic primary debate, Clinton placed the blame for its people’s suffering exclusively on Hamas. “Remember,” she declared, “Israel left Gaza. They took out all the Israelis. They turned the keys over to the Palestinian people. And what happened? Hamas took over Gaza. So instead of having a thriving economy with the kind of opportunities that the children of the Palestinians deserve, we have a terrorist haven that is getting more and more rockets shipped in from Iran and elsewhere.” Her comments, which are demonstrably false, could easily have come from Marco Rubio or Ted Cruz.

Contrast that with the video Sanders released last week. (It’s the third he’s released on Gaza since April). For starters, it consists entirely of interviews with Palestinians in Gaza. That alone is extraordinary. Palestinians in Gaza are almost never included in the debates on American TV. Palestinians are rarely invited to hold public briefings on Capitol Hill, and when they are, it’s hugely controversial.

In his video, Sanders lets Palestinians from Gaza speak for themselves. And they say things American politicians simply don’t say. Again and again, the speakers, who are not politicians but rather academics, students and journalists, call Gaza a “prison.” They talk about having only four hours of electricity per day. In one comic-tragic moment, the lights go on behind a young woman while she is speaking. She notes that the power has just returned after being off for 16 hours. Then it flickers off again.

A professor of political science notes that his family hasn’t left Gaza in more than twenty years. A young man says his “biggest dream is to travel from Gaza for one time in my life. To see how life is from outside the walls of the prison.” He later comments that many of his friends have contemplated suicide: “They cannot continue to live without any types of hope.” A young woman says, “I want the situation to change to where I feel like an equal human being to Israelis.”

By allowing ordinary Palestinians to describe their plight, Sanders’ video allows Americans to see the Great Return March as the product not of blind hatred of Israel but of a quintessentially human desire for a better life. “This protest,” says the professor, “was designed and orchestrated by young, independent and frustrated Palestinians who were sick, tired and exhausted of their living conditions.”

And by allowing ordinary Palestinians to speak for themselves, the video shows how dehumanizing it is to describe the people protesting Israel’s blockade as mere pawns of, or “human shields” for, Hamas. Brilliantly, Sanders’ video shows clips of American pundits blaming Hamas for the protests, and then lets Palestinians in Gaza do something they can rarely do on American television: respond.

“I’m talking with you. I’m not Hamas,” exclaims one man.

“It’s a big lie to say that Hamas is pushing Palestinian children and Palestinian women in the front line,” says the Palestinian professor.

“The majority of the people are not following Hamas,” insists the young man. “They are just participating peacefully because they just want to be free.”

Criticizing Hamas is both legitimate and necessary. But Sanders’ video shows how the media’s obsession with Hamas obscures the human causes of Palestinian protest, and the human consequences of Israel’s brutal response.

“The right question to ask is not whether there is someone asking them to go to the fence,” argues a young woman. “The right question is what is driving these people to walk up to the fence. What kinds of conditions would drive someone to risk their lives knowing that there are snipers who are willing to shoot them?”

And when you look at her, you imagine being that desperate yourself.

For decades, the conventional wisdom has held that a video like Sanders’, which focuses without equivocation or apology on Palestinian human rights, is political suicide. But that conventional wisdom has rarely been tested. Democratic politicians and foreign policy experts are so accustomed to self-censorship that AIPAC and its allies rarely have to make an example of them. They make an example of themselves.

Sanders is betting that the political ground has shifted. In a sense, he’s doing in the Democratic Party what Trump has done inside the GOP. For years, polls showed that ordinary Republicans were moving away from their party’s elite on trade and immigration. But until Trump, no Republican presidential frontrunner had been sufficiently unconventional and sufficiently unafraid to put that proposition to the test.

That’s what Sanders is doing on Israel. He knows that Netanyahu’s opposition to the two state solution, and his support for the Iraq War, and his battles with Barack Obama, and his bromance with Trump, have deeply eroded support for Israel among African Americans, progressives and the young. He knows that his likely 2020 competitors are moving left on issue after issue—from health care to college tuition to the minimum wage—in an effort to keep pace with a Democratic base that has been radicalized by the financial crisis, stagnant wages, failed wars and Donald Trump. But he knows that when it comes to Israel, those competitors are constrained by their fears of the American Jewish establishment.

Bernie Sanders, who now stands a better chance of becoming president than any Jew in American history, is not afraid. And, as a result, over the next two years he just might alter the American debate over Israel in ways we have not witnessed in decades.

Perhaps the courage of the protesters in Gaza is proving contagious after all.

Bernie Sanders’ Criticism Of Israel Is Radical. And He’s Taking It Mainstream