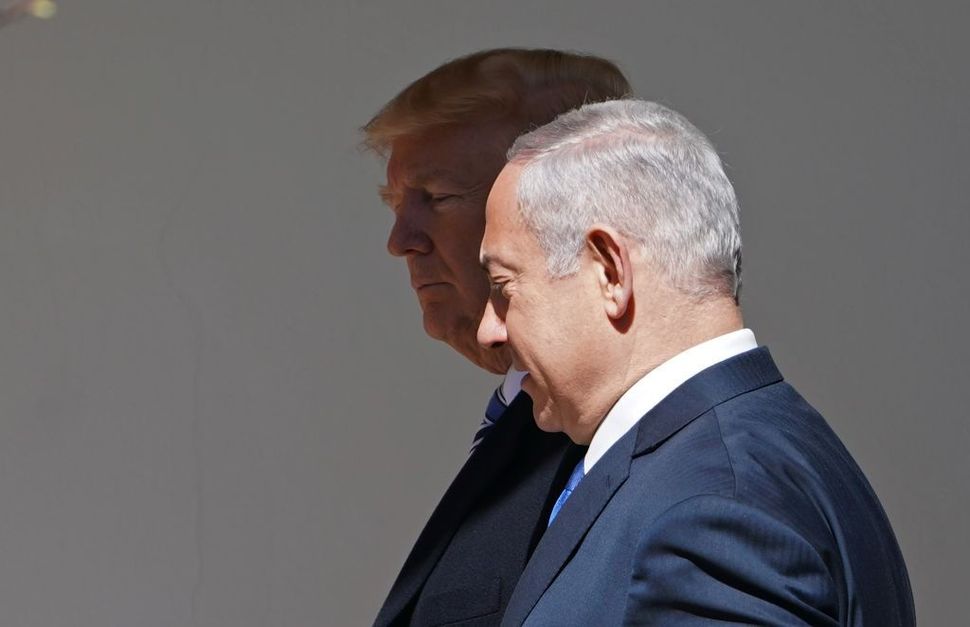 President Donald Trump and Prime Minister Benjamin Netanyahu make their way to the Oval Office for a meeting at the White House on March 5, 2018 in Washington, D.C. (Photo by MANDEL NGAN/AFP/Getty Images) Image by Getty Images

Back in the late 1990s, it seemed appropriate to describe relations between Israel, the United States and the American Jewish community as a strategic triangle. Each of the three sides to the triangle interacted with and nourished the other two.

This was not an equilateral triangle: Israel seemed to be replacing U.S. Jewry as the global center of Jewish life, and the United States was the world’s dominant power. But a vibrant and involved American Jewish community was nevertheless a vital player.

Each needed the other and each gave something to the other. Israel benefitted immensely from American Jewish support, and not only in Washington. At the time, I represented a major American Jewish advocacy organization in Israel and the Middle East. I could travel to the Yemeni capital of Sanaa or to Doha in Qatar and genuinely engage leaders there on behalf of all three sides of the strategic triangle. And the Arab leaders would listen, because all three sides had shared values and interlocking clout and influence.

Today, in the age of Trump and of Netanyahu and Israel’s new Nation-State law, the strategic triangle has flattened into a single dotted line that connects Israel and the U.S. The liberal mainstream of the American Jewish community is increasingly on the sidelines. The line connecting Washington and Jerusalem is dotted because President Trump can’t be trusted to maintain the U.S.-Israel alliance with the kind of U.S. values and involvement that characterized previous decades — particularly when the American Jewish mainstream is slowly drifting away from support for a robust relationship.

The Trump administration and the Israeli mainstream under Netanyahu have joined the ultra-nationalist family of nations along with partners like Russia’s Putin and Hungary’s Orban. Most American Jews, along with a shrinking minority of Israelis, cannot identify with this mindset. They support neither Trump nor Netanyahu. They believe in old-fashioned values, like civil society and pluralism, that are losing their traction in much of the world. By-the-by, a new kind of intermarried Judaism is emerging in the U.S. that synthesizes many things American and Jewish but few that appeal to Israelis.

A major corollary of the current seismic shift in global affairs is that there is no longer an Israeli-Palestinian peace process to speak of. This development has many stakeholders. There is of course an Israeli leadership bent on swallowing the West Bank and disenfranchising its Arab population while its global ultra-nationalist friends turn the other way. But note also the input from indifferent and highly dictatorial Arab leaders frightened of Iran, from a lame-duck Palestinian leader in Ramallah and Islamist fanatics in Gaza, and from misguided or ignorant European and American leaders.

Here we encounter some disturbing parallels. First, liberal American Jewry is in the throes of a struggle with looming rates of intermarriage and is hard-put to maintain the younger generation’s interest in ultra-nationalist Israel. Second, the Israeli peace camp and its American Jewish supporters preach, without any basis in developments on the ground, that a two-state solution is somehow still an option.

And third, as Israel and the American Jewish mainstream drift apart, public figures on both sides of the divide preach — again without any basis in developments on the ground — that the breach can be healed. From one direction we hear ideas for a Jewish People’s Council, a sort of Jewish House of Lords giving the Diaspora a stronger voice in issues affecting Israel. That means adding a stillborn global Jewish institution to the half-dead and ineffective ones whose existence the founding fathers feared to cancel when Israel was born 70 years ago.

From the other direction, Israel’s new Nation-State basic law provides for Israel to “act to preserve the cultural, historical and religious heritage of the Jewish people among Jews in the Diaspora.” That means that Naftali Bennet, Israel’s National Orthodox pro-settler education minister who has been introducing his ultra-nationalist version of Judaism into Israel’s secular schools and expelling anyone with an alternative version, wants to do the same with the 80% of American Jews who don’t share his views.

Notably, most of the many Israelis who object to the new basic law paid no attention to this particular clause. After all, most Israeli Jews have never really cared about their American Jewish cousins. Israeli secularism and the American Reform and Conservative movements have never found much in common.

So just as the Israeli peace camp periodically explains why all is not lost and a two-state solution is beckoning, there will always be cosmopolitan Jews who explain that Israel-Diaspora relations can be rebuilt with a few tweaks. In reality, Israel is sliding down a slippery slope toward an ugly, conflicted, non-democratic and non-Zionist one-state reality that will be anathema to U.S. Jews (and to many Israelis), but fits into our increasingly ultra-nationalist and racist world.

This means that the worse things get in Israel, the worse they will be for Israel-Diaspora relations. The triangle of old was a strategic alliance. The damage, correspondingly, is strategic: for Israel and for the American Jewish community.

Yossi Alpher is a former Mossad official and former director of the Jaffee Center for Strategic Studies at Tel Aviv University. His latest books are “Periphery: Israel’s Search for Middle East Allies” and “No End of Conflict: Rethinking Israel-Palestine.”