Is This Jewish Doctor Secretly A White Nationalist? 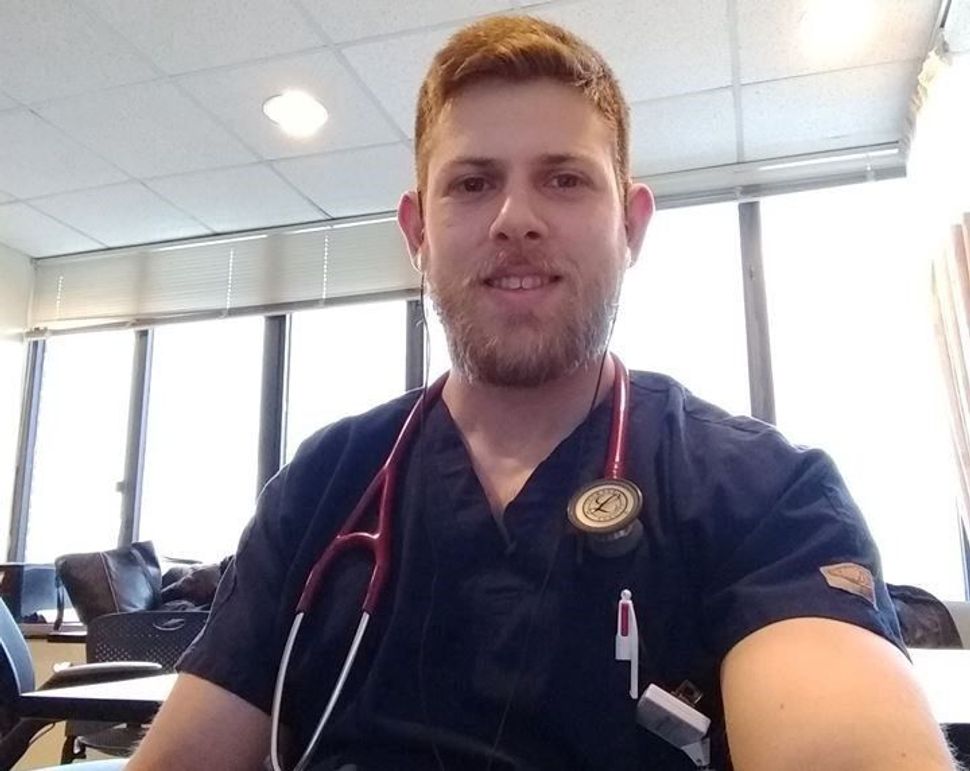 This image of Dov Bechhofer was included in his doxxing on Medium.

A Jewish doctor at a New York City hospital has been “placed off duty” after an article posted online Monday claimed that he was Facebook friends with white supremacists and had frequently commented on some of the web’s most high-profile hate sites, including the writing of “A Jewish Defense of Anti-Semitism” and approving reflections on armed racial revolution.

The article about Dov Bechhofer, a doctor who works at Montefiore Medical Center in the Bronx, based its accusations on links to Bechhofer’s since-deleted Facebook page and screenshots of the writings of someone who goes by “Dov” in the comments section of the blog for white nationalist publishing house Counter-Currents.

The piece briefly appeared on the website Medium before being taken down for violating the site’s rules against “doxxing,” or revealing private information. The article included Bechhofer’s alleged mail and email address, phone number and social media accounts.

No one responded to requests to comment sent to the phone number and email account listed as belonging to Bechhofer. A call sent to Dov Bechhofer’s parents’ home was also unreturned.

Montefiore, where Bechhofer works as a radiologist, said in a statement Monday that he was taken off duty as soon as they learned of the Medium article, and that they will be conducting an investigation. “The views expressed in the article are in no way reflective of Montefiore, our mission, how we conduct ourselves, or the care we deliver each day,” the hospital said in a statement, adding, “Having all backgrounds, beliefs and diversity embodied in our patients, employees and neighbors is intrinsic to who we are, and allows us to thrive as an institution.”

Most American Jews skew liberal, and even politically conservative Jews often pride themselves on their anti-racism. Bechhofer’s father, a rabbi, has frequently spoken out against prejudice as a leader of the group Orthodox Jews Against Racism and Discrimination. Yet the rise of the “alt-right,” a loose movement of racists and white nationalists, has seen some Jews join its adherents despite many of its leaders’ professed anti-Semitism.

Such behavior exists on a spectrum: On one end are Jews like White House senior advisor Stephen Miller or New York lawyer Aaron Schlossberg, whose anti-immigrant statements have been accused by critics of being racially tinged. On the other end are Jews who explicitly advocate for white ethnostates — including former American Nazi Party leaders Frank Collin and Dan Burros and, now, Bechhofer. The difference is that unlike those two, Bechhofer is open about his Judaism in white supremacist spaces.

Spencer Sunshine, an associate fellow at the think tank Political Research Associates who studies far-right movements, told the Forward that it wasn’t unusual for a Jew to support white nationalism or even white supremacy.

“There are no shortage of Jews who embrace anti-Semitic conspiracy theories and say, these are the bad Jews, I’m one of the good ones,” he said.

The evidence linking Dov Bechhofer to “Dov” the Counter-Currents commenter is circumstantial but powerful. Both Dov and “Dov” are Jewish doctors who have praised white supremacist figures like Jared Taylor, grew up in Chicagoland before moving to New York, write using similar idiosyncrasies and even profess to liking the same entertainment, including the obscure Norwegian movie “The Last King.”

The commenter “Dov” frequently appeared underneath articles on Counter-Currents, which Sunshine described as “at the highest intellectual level of discourse in the white nationalist crowd.”

Participating in its forums shows that Bechhofer was on the “hardcore” edge of the right, Sunshine added: “He’s not just a white American Jew who doesn’t like immigrants, it’s on another level.”

“Dov” wrote on multiple occasions that the problem with the “Unite the Right” white supremacist rally in Charlottesville last year were the optics, and not the alleged murder of a counter-protester.

“To me, the major failure of U the R was not the violence – it was the juxtaposition of the swastika and Nazi salute with the Confederate flag, the ‘Right,’ and Whiteness in general,” he wrote on August 13, one day after the alleged vehicular attack by Jame Fields. (All of his comments on the website have since been deleted.)

“My main problem wasn’t with the unforeseeable act of Fields…but with three days later, using an acronym for “live-action role playing.”

“Dov” frequently expressed disgust with racial intermarriage. “To me,” he wrote, “the greatest threat Asians in general pose to Whites is that of miscegenation. Being in the medical field, even I (a White Nationalist aware of the White race’s maladies for 6+ years) am constantly taken aback at the prevalence of White-Asian miscegenation among the highly-educated.”

He also repeatedly expressed support for white ethnostates, which he said he hoped to see “ASAP.” He even praised the idea of “soft expulsion” of African-Americans and Latinos in one comment, arguing that while there could be “unforeseen negative consequences” to such a plan, “the immediacy of the salvaging of White nations overrides abstract concerns, so I’d say the fight would be worthwhile.”

And it didn’t stop at racial minorities: Bechhofer used his personal Facebook page to explicitly and repeatedly call for mass deportations of Muslims from Europe. “The West has no use for them, and they’ll be just fine when they go home,” he wrote in a Facebook group called “God Emperor Trump (Official).”

“Whites are being subjected to a concerted attack by ‘people of color’ and must band together as Whites to avoid their own destruction,” he wrote in a comment in February using his since-scrubbed YouTube account.

He even seemed to endorse armed revolution as a means of realizing his white ethnostate dream. “Continued engagement in the political structure is necessary, but all the signs point to extra-democratic solutions now being the only way for the various ethnicities of the White race to save themselves,” he wrote in May 2017. “The great question is how to overcome the differential of firepower between government and citizen.”

But if America establishes a white ethnostate, what will happen to the Jewish community? As “Dov” wrote in September 2016, while he personally considers some Jews to be non-Nordic whites, “It’s clearer with each passing day that from functional and practical standpoints, they need to be considered either non-White or perennially anti-White concerning aspirations of and strategies for the White race moving forward.”

Indeed, “Dov” wrote on multiple occasions of his disdain for fellow Jews, accusing them of purposefully plotting to ensure the downfall of the White race. “I’m all for placing appropriate responsibility on Jews for their anti-White activities,” he wrote in response to a comment about a Forward article about Meghan Markle’s Jewish connections, though he drew the line at calling her marriage a Jewish conspiracy.

One tirade he wrote last December was typical in his disdain for his fellow Jews:

“I’ve had it in my head to write a little something called ‘A Jewish Defense of Anti-Semitism,’ but it’s been slipping my mind. In short, the vocal majority of Jews act so irritatingly and display such reprehensible attitudes – publicly and privately – that I’d rather see a ‘tempered’ anti-Semitism now than see Jewish perfidy continue without consequence until, as Johnny Cash might say, the man comes around. Because he will. As I frequently tell Jewish acquaintances, if there is another Holocaust, it will be entirely of their doing (I don’t get too into the genesis of the first one… I once tried, but mouths fell open and I was practically kicked out of the apartment). So, yes – I like to see (((them))) named and exposed where relevant. I would like to see a general boycott of Hollywood coupled with some Semitic realism. And I’d like to see the fanatical AIPAC supporters exposed as the dual nationalists that they are.”

The use of the triple parentheses was an example of the “echo” affectation commonly used by anti-Semites to indicate that a person is Jewish.

Links associated with the Medium post appear to show that Bechhofer himself is Facebook friends with many leading figures of American white nationalism and white supremacism, including Jared Taylor and Peter Brimelow. Bechhofer also ran a Facebook group called “Supporters of American Renaissance,” referring to Taylor’s publication, which calls itself “the Internet’s premier race-realist site.”

A screenshot also showed Bechhofer commenting on the Facebook page of the anti-immigration site VDARE, which has frequently published the works of white supremacists. The article criticized the conduct of D.C. Superior Court Judge Lynn Leibovitz; Bechhofer’s comment was one word: “(((Leibovitz))).”

The doxxer spent six months investigating Bechhofer, and was in contact with people who knew him personally; documents shared with the Forward claim that the investigation included in-person surveillance.

Revealing Bechhofer’s private writings was justified because co-workers and patients ought to know his views, the doxxer said — especially considering the potential that his views of minorities could affect his diagnoses.

The investigation was done “so his neighbors know who he is and who they’re living near,” the doxxer added. “Just like child sex offenders get registered.”

Is This Jewish Doctor Secretly A White Nationalist?