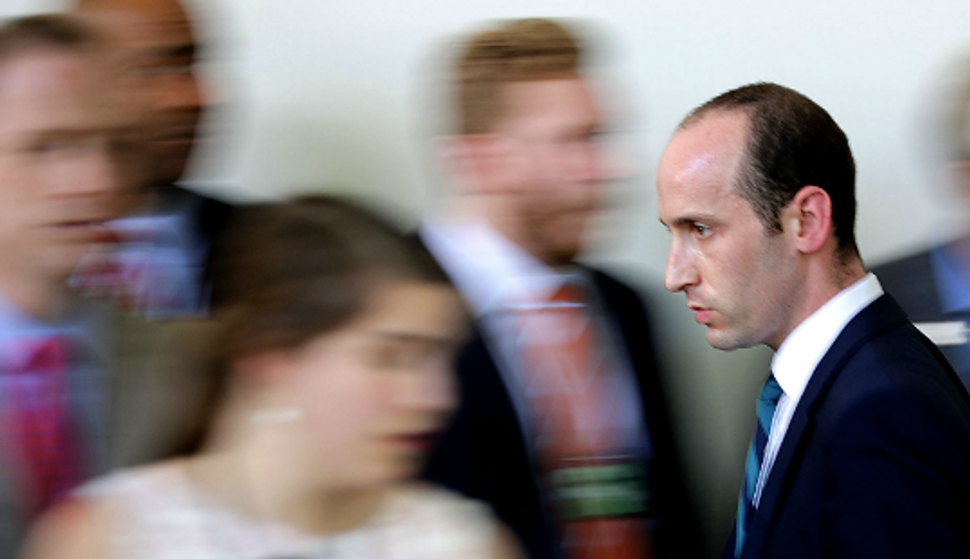 Until now, Ivanka Trump and her husband Jared Kushner were the main targets of ire for the overwhelmingly liberal American-Jewish community, horrified that members of its own tribe could have contributed to the policies and tone of the Trump White House.

But this past week marked a turning point: Jewish fury is now aimed squarely at another senior Trump official from the tribe: Stephen Miller, the staunchest advocate of the widely despised family separation policy at the southern border.

He has overtaken Jared and Ivanka for inspiring rage among American Jews opposed to the president’s policies and the language he has used to defend them – including use of the word “infest” to describe migration, a term associated with Nazi Germany.

The anger toward Miller has a different and much sharper tone. Jared and Ivanka are generally perceived as being opportunists who joined the Trump campaign and administration out of family loyalty, but mainly ambition. They are seen as hoping to use their powerful White House posts to improve both their financial position (Jared and his family’s real estate interests) and personal brand (Ivanka’s fashion line).

They are consistently in the spotlight when it serves them – from glitzy inaugural balls to the Winter Olympics to the U.S. Embassy ceremony in Jerusalem. But when times are tough and the White House is taking fire over an unpopular policy, they are hard to find.

Whether it’s been the Muslim travel ban or withdrawal from the Paris Agreement to combat climate change, their absence is consistently followed by anonymously leaked press reports that they attempted to be the better angels whispering in the president’s ear – but, alas, failed.

Miller, on the other hand, is no mere grifter or complicit opportunist. He shocks the American-Jewish community because he comes off as a true believer – an enthusiastic and unapologetic architect of, and cheerleader for, the “zero tolerance” immigration policy that has made children suffer as white nationalists cheer.

There’s a sense that, somewhere in their hearts, Jared and Ivanka know better. Miller, on the other hand, wholeheartedly embraces and embodies an ideology that many American Jews see as a threat to their own well-being, given that it promotes a vision of America as a white Christian nation.

The disdain of Trump’s senior adviser for immigrants seeking safe harbor in the United States, and his unstinting efforts to promote policies that keep them out, is seen as rank hypocrisy in a Jewish community that owes its presence in America to policies that allowed them to immigrate only a few generations ago – in many cases escaping deadly anti-Semitism.

“Stephen actually enjoys seeing those pictures at the border,” an outside White House adviser was quoted as saying in Vanity Fair this week. “He’s a twisted guy, the way he was raised and picked on. There’s always been a way he’s gone about this. He’s Waffen-SS.”

Even more unsettling: Miller’s was a typical American-Jewish upbringing. Ivanka and Jared are undeniably outliers – Ivanka because she is a convert; and Jared because of his membership in an unusual clan of billionaire Orthodox Holocaust survivors, a community that is no stranger to traveling in Republican circles.

Miller’s life story, from his Santa Monica childhood to his Reform bar mitzvah to his high-end college education, isn’t supposed to be a recipe for hard-line, right-wing politics. A year ago, Rabbi Jeff Marx, who tutored him for his bar mitzvah, was already apologizing: “We did our best here to teach Stephen the ethical standards of Judaism,” the Santa Monica Synagogue rabbi told The Hollywood Reporter in March 2017, Marx lifting “his hands in a gesture of helplessness, unwilling to say more.”

A year on, with Miller’s influence on Trump having had such painful real-world consequences, the attitude toward him has shifted from disappointed puzzlement to sheer outrage.

Perhaps the most extreme expression of dismay came from Jane Eisner, editor of American-Jewish publication the Forward, who suggested this week – tongue only half in cheek – that in an ideal world, the Jewish people would be able to excommunicate a person who “has pushed for an America that privileges white nationalism with unstinting, cheerless determination.”

Miller’s worldview, Eisner wrote, “is nasty and unforgiving, devoid of hope, optimism and generosity, and so at odds with Jewish values and experiences that it’s hard to fathom this guy really had a bar mitzvah.”

While excommunication isn’t a realistic option, she still called for the community to “distance ourselves from him in the strongest way possible.” She added, “Even if it changes him not one iota, even if it feeds his perverse sense of victimization, we still should say: You are not one of us. Not when you promulgate dehumanizing policies that violate Jewish values.”

Among the Jews already distancing themselves from Miller: members of his own family.

Thanks to a movement known as Resistance Genealogy, it was revealed months ago that Miller’s maternal ancestors – the Glosser family, who fled anti-Semitism in Belarus in 1903 – repeatedly benefited from the phenomenon their descendant has been fighting tooth and nail: Chain migration, where relatives sponsor their family members’ immigration to the United States. It was also reported that after four years in the United States, his great-grandmother spoke only Yiddish and was not proficient in English.

Now the spotlight is also being shone on the paternal side of the family: Researchers unearthed the fun fact this week that the White House aide’s great-grandfather, Nison Miller, was denied naturalization as a U.S. citizen in 1932 because he failed his citizenship test and was officially deemed “ignorant” of what it meant to be American.

This is precisely what many in the Jewish community are now saying about Nison’s great-grandson.