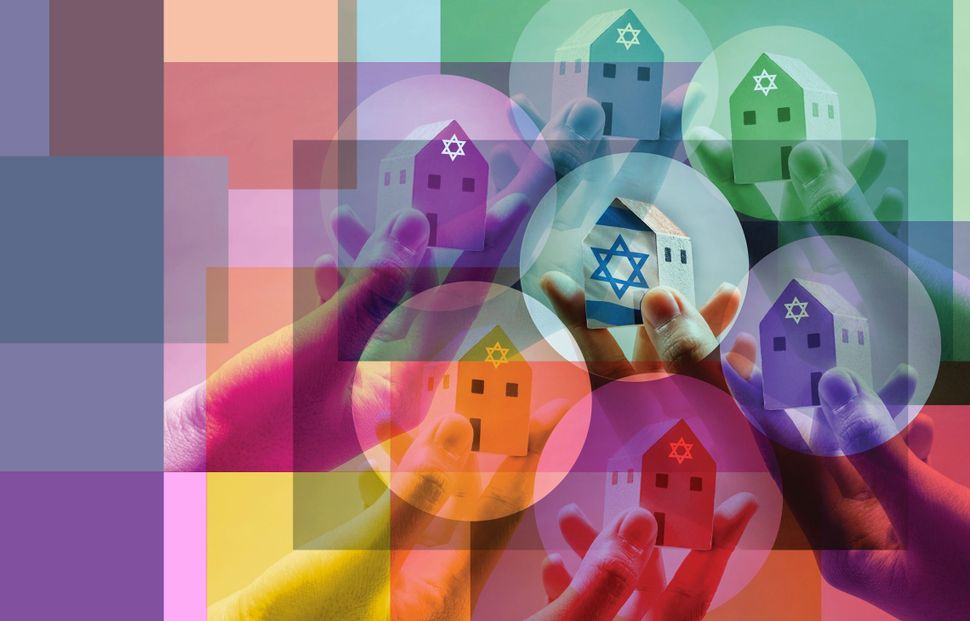 The State of Israel is 70 years old, well past its early growing pains; it is strong, confident and distinctive. North American Jewry is still here — strong, confident and distinctive in its own fashion. But the relationship between the world’s two largest Jewish communities is growing more and more strained, and, on this milestone anniversary of independence, it is the subject of much hand-wringing over whether and how it can ever be repaired.

So I’m going to offer an alternative idea: Rather than pretend that some sort of global marriage counseling can reconcile two fundamentally different entities, let’s acknowledge and celebrate their separate identities and embark on a new kind of relationship. To begin with, let’s leave behind the outdated notion of “Diaspora.”

I do not suggest that the two parties should divorce, or even amicably separate and go their own ways. After seven decades, Israel has become an essential element of modern Jewish life far beyond Tel Aviv, in Toronto and Tucson and Tashkent; those of us who live outside The Land benefit enormously from its political, social, intellectual, economic and cultural achievements, from its spiritual centering, from its very being there. We turn away from it at our peril, and our detriment.

But seven decades on, the language of Israel and Diaspora, of center and periphery, hub and spoke, homeland and exile, no longer describes the lived reality of the majority of the world’s Jews who continue to reside and thrive outside Israel’s contested borders.

We need a new vocabulary, one that reflects a more egalitarian relationship, something horizontal rather than vertical. While it is true that the negative connotation of “Diaspora” formulated in classic Zionism is fading — with so many Israelis living in Los Angeles and Berlin, how could it not? — there remains an expectation that Israel is the central address for real Jews, and the rest of us live in the outer exurbs.

Dealing with this disequilibrium isn’t a challenge only to Israelis, to view us as more than an open wallet, a font of unquestioning political support and a steady stream of tourist dollars. It’s also a challenge to those North American Jews who over the decades have substituted worship of a mythical Israel — what Donniel Hartman calls “the endangered fairy-tale land” — for real engagement and commitment to our own Judaism at home.

Some Jews in what we call the Diaspora will continue to make aliyah and fulfill the Zionist dream. But most will not, and we need to adjust our expectations of each other accordingly. A more balanced and realistic relationship can strengthen both anchors of 21st-century Jewish life.

The tension over the relationship is, of course, nothing new. Within only a couple of years of Israel’s founding, Prime Minister David Ben-Gurion and American Jewish Committee leader Jacob Blaustein agreed in a public declaration that the fledgling state would not speak for the rest of world Jewry and vice versa, but their agreement was quickly abandoned. Over time, Israel has assumed an ever more dominant role in world Jewish life, which has been both welcome and controversial. Ben-Gurion would not have anointed himself king of the Jews, even if he wanted to; Israeli Prime Minister Benjamin Netanyahu obviously covets the crown.

Efforts to refashion this relationship are also not new. Israel’s near-miraculous victory over its Arab neighbors in 1967 marked a turning point in how world Jewry viewed the Zionist homeland, as the fear of annihilation was replaced by pride and excited attachment. But this euphoria soon gave rise to worry, and every momentous anniversary since has prompted angst-ridden essays and demoralizing surveys, too numerous to recount here, about the growing disconnect between Israeli Jews (its non-Jews rarely make an appearance) and the rest of us.

We want to believe in Jewish Peoplehood with a capital P, and yet as Israeli society has matured, it has developed its own identity, singular and apart from the largely European cultural and political heritage of most American Jews. And American Jews, too, have evolved over 70 years to become more prosperous, powerful and assimilated into the wider culture.

Our ethnic origins and immigration experiences are different. The way we practice Judaism — or the way we don’t — is different. As Arnold Eisen, chancellor of the Jewish Theological Seminary, said at a conference in Israel in January:

“In North America, one has to choose again and again to be Jewish. In Israel, Jewish identity comes with the territory for the vast majority of the population — and comes with obligations, such as army service and taxation. A voluntarist community stands over against a coercive state. On one side, Jewishness is a highly individual matter. On the other, it is overwhelmingly collective.”

North American Jews stress personal morality and social ethics; Israeli Jews focus on history and destiny. These contrasting priorities are shaped by a more basic difference: American Jews are a religious minority, dependent on a society that values pluralism and diversity. Israeli Jews are an ethnic majority, shaped by the necessities of governing and the privileges of power.

Our conversation is stilted, in part because we are unable to talk and listen to each other genuinely. Most American Jews haven’t bothered to learn Hebrew, and unlike, say, the French, the Israeli government has never invested in a network of schools to teach the language systematically in the United States.

Several developments accelerated the widening divide in the past few years. Netanyahu’s provocative speech to Congress against the 2015 nuclear agreement with Iran put him at odds with most American Jews and the president they warmly supported. His abrogation of the agreement to create an egalitarian prayer space at the Western Wall in Jerusalem last year alienated many members of the two largest religious denominations in America. His government’s lurch toward religious nationalism and its refusal to deal with the Palestinian occupation is leading to further disenchantment.

And while Netanyahu’s unflinching embrace of President Trump has cheered his domestic audience, it has disgusted many American Jews. The latest polling shows that more than two-thirds of Israelis approve of Trump’s leadership, while only about one-quarter of American Jews feel the same.

It’s clear that bridging the metaphorical gap between these communities will take more than a plate of hummus at a federation retreat. Netanyahu himself seems to understand this, which is why he increasingly looks to Republican Jews and Christian evangelicals for the love that more liberal Jews are withholding.

But instead of the Israeli prime minister shunning many American Jews, and American Jews turning away from Israel, a healthier, more realistic relationship requires leveling the playing field with mutual respect. Israelis can learn from us about living in pluralistic families and communities, and developing innovative expressions of Jewish faith and culture. We can learn so much from Israelis about collective identity, national pride and self-sovereignty, and about surviving in a very tough neighborhood.

And we each have a vested interest in each other’s security and sustainability.

“Seeing the global Jewish community as multiple centers, with Israel as one center, better describes how Jews actually live,” David Shneer, a history professor at the University of Colorado at Boulder, said in an email. He’s one of the scholars who posited a decade ago that the “bipolar universe of Israel and every other Jew” no longer works, and he’s even more convinced of it now, 10 years later.

Hartman, president of the Shalom Hartman Institute in Jerusalem, has also thought deeply about this challenge, arguing, since a seminal paper published in 2008, that Israel and world Jewry must radically alter their relationship.

He told me in a recent phone conversation from Israel that he doesn’t even use the word “Diaspora” anymore, and that he is formulating an alternative that builds on the idea that we all have multiple places we call home. Where we were raised. Where we live now. Where our children or our siblings live.

“We need to reclaim a family discourse. Families in fact have multiple centers that interact with each other,” Hartman said. “You have to work out the rules, because the rules aren’t simple. There’s a complex interplay. When you visit your kid’s home, you may open the fridge, but you don’t complain if it’s dirty. You don’t move the furniture.

“The multiple home narrative doesn’t require you to get into a conversation about whose home is better. It’s not a zero sum game. We are not competing. Your home is yours because that’s where you live.”

Instead of trying to build a bridge across many thousands of miles, as if we can somehow meet halfway and grasp each other’s hands in an elusive bond of unity, I suggest that those of us in the Diaspora think of ourselves as being at home. Unlike so many hyphenated Americans, we are blessed also with a homeland, Israel. Not necessarily the land of our birth, or our ancestors’ birth, but a living, breathing homeland connected to us through history and faith, one that we can engage and support and love.

While we live as equal Jewish citizens here.

Jane Eisner is the Forward’s editor-in-chief. Contact her at [email protected]