Yes, You Should Be Comparing Trump to Hitler 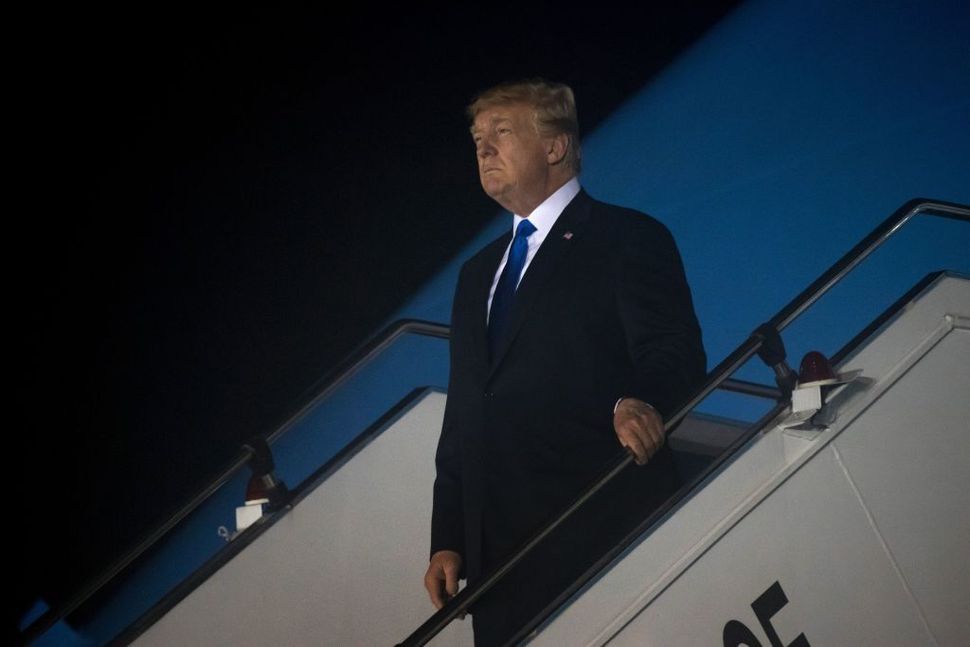 For those of us who thought the Trump administration had lost its power to shock us, this week has been a rude awakening. From images of caged migrant children sleeping under space blankets to parents facing deportation proceedings alone, the federal government’s forcible separation of families at the border has shocked Americans’ consciences in a way that transcends ideology.

With our ancestral memory of forced migration and diaspora, American Jews’ history demands that we speak out against our country’s violent immigration policies, and to our credit, we’ve stepped up. Even the Orthodox Union, fresh off its questionable decision to honor Jeff Sessions, has condemned the federal government’s decision to take children from their parents.

But recently, we’ve begun to hear a familiar complaint from certain corners of our community: Comparing the Trump administration to Nazi Germany is offensive.

Stop already with the Nazi and Hitler analogies. Really. Stop. What’s happening is its own kind of bad and you court discrediting the seriousness of your complaints about it by overstating things so tastelessly and wrongly.

Not only is it disrespectful to the victims of the Shoah, the argument goes, but family separation and ICE abuses of detainees are so different from Nazi atrocities that it’s impossible to compare the two.

One of the many reasons Holocaust analogies are a bad idea is that they let the bigots turn the debate into one over whether the analogy is correct, when the policies are in fact evil *regardless* of whether they are anything like the Holocaust. https://t.co/tfh78gcnfv

This, to put it mildly, is a load of bunk. We want to believe that the Nazis were a special, exceptional kind of evil, because it’s easier for us. But the reality is that their brutality was just another manifestation of humanity’s worst flaws: our fear of the Other, the unthinking cruelty we unleash upon each other as soon as society gives us license. Those flaws are on full display at our southern border today, and we must recognize that if we are to break the cycle.

Like many Ashkenazi Jews, my ancestors came from the far western reaches of Imperial Russia, the region known as the Pale of Settlement. It wasn’t by choice that they settled there: Catherine the Great banished the Jews to that slice of the empire’s frontier after merchants in Moscow complained that their Jewish competitors were stealing away business with their “well-known fraud and lies.” Things got worse in the 1880s with the enactment of the May Laws, which barred Jews from participating in the financial system and doing business on certain days, and capped the percentage of Jewish students allowed in schools.

If that sounds familiar, it’s because Adolf Hitler followed that same playbook in 1935, denying Jews citizenship, barring their access to certain professions and eventually herding them into ghettos. Bit by bit, he transformed us into the Other: corrupting, poisonous, a danger by our very existence.

To miss the parallels in what our government is doing today, you would have to be blind. It’s there in the way that Donald Trump invokes the boogeyman of MS-13 to justify the imprisonment of children too young to tie their shoes. It’s there in the stories of detainees who have no idea where Homeland Security has taken their children, and have no way of finding out.

Yes, our government is only rounding up human beings, not executing them or burying them in mass graves. But the roots of that evil are there — they have, to an extent, always been there. Does it need to flower into something truly monstrous before we recognize it for what it really is? Hitler also did things by degrees, nipping away at freedoms and piling one small indignity on top of another. That has been the strategy of the Trump administration: first racial insults, then stepped-up enforcement, then the wall, then the cage.

None of that is to say that the situation is hopeless. Yes, it’s true that the collective trauma of the Shoah can be a well of despair. But it’s a fount of determination for us, too. To truly honor its victims, we need to make their memory into a living testimony, a reminder that “never again” means not letting authority denigrate another’s humanity and not turning away refugees to face their fate alone.

Now, more than ever, we need to deal in moral absolutes and make it clear to our representatives that separating families is a spiritual line in the sand. Should they cross it, they will be adding a black mark on their career that no subsequent amount of good deeds or time will ever obscure.

Yes, You Should Be Comparing Trump to Hitler