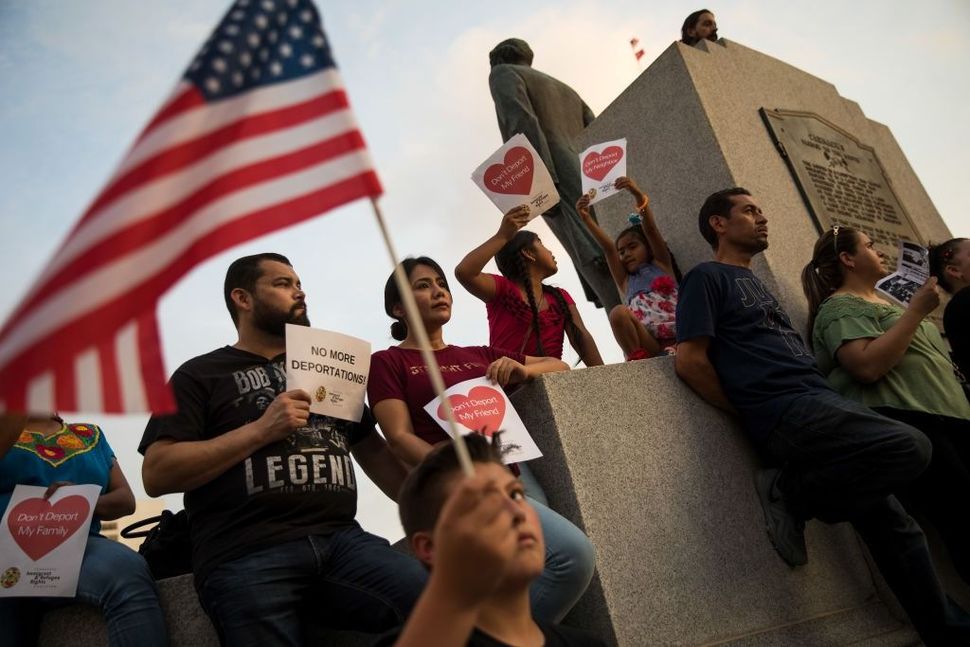 The Trump administration’s treatment of asylum seekers and immigrant communities is filling many Americans with horror and dread. During the dark days of this administration, we are seeing immigrants who have built homes, businesses and lives in America have their legal status arbitrarily revoked by refusals to extend TPS. We are hearing the screams of children as they are ripped from the arms of asylum-seeking parents. We taste fear — for ourselves, our friends, our colleagues, our neighbors and our country.

America is doing terrible things to vulnerable people. We are deporting people who have lived here for most of their lives, and leaving them to be killed in countries they left as children. Asylum seekers, fleeing violence and looking to America for safety, are being brutalized again by having their children torn from their arms and detained. One man was so traumatized to be separated from his family that he killed himself. We are trying to deport the pizza delivery man, the chemistry teacher, the custodian of our synagogue. The nightmarish stories of children taken from their parents, coupled with an emboldened ICE tearing families apart within our borders, are filling Americans with fear and shame. Comparisons are being made to one of the darkest chapters in modern history: the Holocaust.

While fear is justified, fear-mongering remains unethical. We should be angry and afraid, but these comparisons are deeply inappropriate and ultimately disempowering and counterproductive.

We can fight new detention centers designed for children without comparing them to concentration camps. We can decry the unethical and immoral behavior of ICE without comparing it to the Gestapo. We must not lean into despair.

We must not do anything to further frighten, traumatize and disempower those most directly affected. This administration is lacking in morality, ethics and compassion, but it is not committing mass murder; it is not liquidating communities; it is not committing genocide. This matters, because American citizens are not risking their lives or livelihoods when they choose to stand with those under attack.

Constant fear leads to fatigue, adrenal burnout and ultimately apathy among activists. We cannot afford to waste an ounce of human capital in this fight. We need our communities primed and ready to run a marathon for the rest of this administration’s governance. Resistance leaders must lead with action, with inspiration and with empowerment — not the politics of fear. Those are the politics of President Trump, and they will not lead us to victory. We must hark back to a happier time, and believe again in the politics of hope, of community organizing, of civic engagement, to end this national nightmare.

At the moment, vulnerable people under attack do not need you to hide them in their basement or debate whether this president is Hitler. They need you to stop fantasizing about what extreme measures you would take if this was Vichy France or the Danish resistance.

They need you to take action, focus on where we are now and fight back. We are not in Nazi Germany, so please: Avail yourself of the vibrant democracy we currently live in, even if you believe that democracy is under threat. Pick up your phone and call Congress. Register to vote. You have rights — do not cede them. Do not give into fear. If you are a citizen of the United States, you can make change. Use your freedom and your privilege and your time to raise your voice. There is so much we can do right now. We have more power than those in Nazi Germany could have dreamed of. Please, I am begging you, use it.

I believe that those who carry their babies hundreds of miles in search of freedom and safety should be treated as heroes and welcomed as such. Families should be housed together while they seek asylum, and ripping crying children from their parents’ arms has no place in modern America. If you stand against separating families, please support the Keep Families Together Act. Call your senator today at 202-224-3121 and voice your support.

While the administration holds the power to set ICE and other immigration policy, Congress has the power of the purse. ICE funding has to be negotiated and reauthorized annually via the appropriations process. Those on the House and Senate Appropriations Committees can cut or place conditions on that funding. They need to hear from you that you are angry about where your money is going, and that you want it to stop. Remind them that you are a constituent and that this will affect who you vote for. Regardless of who your member of Congress is, you can ask them to sign onto Rep. Lofgren, Rep. Thompson and Rep. Jayapal’s letter asking the House Appropriations Committee to defund ICE.

Regardless of your political party, you can demand change. You can meet with your members. You can tell them the story of how your family fled to America, like mine did, and tell them that you only vote for people who support refugees, immigrants and anyone else seeking to avail themselves of the American Dream.

Many American Jews are living the American Dream — and we should demand it for others.

It’s disrespectful to the memories of those our community lost in the Holocaust to lose sight of the power we have to make change. As Jews, we have experienced otherness. We have experienced xenophobia. We know what turning away refugees means. Many of our families, including my great grandparents, came here as refugees. We know what it means to have state violence visited upon us — our history makes it very clear.

As American Jews, we have more power than we know. Please use it.

Carly Pildis is a political organizer and advocacy professional based in Washington, D.C. Follow her on Twitter, @carlypildis.