This story was updated on October 17 to reflect important developments in key races and our overall predictions.

Fueled by a growing Democratic wave, Jewish candidates stand to pick up four additional seats in the House of Representatives and one in the Senate in the coming midterm elections, an exclusive Forward statistical analysis reveals.

With a dozen mostly liberal insurgents mounting strong campaigns, the Forward’s analysis predicts that the new House will include at least 27 Jews — at least a hefty 18% increase from the 23 Jewish representatives today.

A model simulating a Democratic “surge” — similar to the one that turned the recent special election in Ohio into a nailbiter — predicts an increase of 8 or 9 Jews in the House, a stunning one-third jump in one election cycle. A GOP comeback would still result in an increase in one or two Jewish representatives.

The reason for the possible #JewWave? A significant Jewish cohort among the Democratic insurgents who are pushing to snatch Republican-held seats in well-educated suburban and exurban districts that are trending more Democratic amid widespread anger at President Trump.

“These strong Jewish candidates are part of the Democratic strategy in expanding the playing field,” said nonpartisan election analyst Nathan Gonzales. “This crop of seats is a microcosm for the fight for the House overall.”

“Democrats don’t have to win all these districts to win the majority,” Gonzales added. “If even half of them win, then Democrats are well on the way to a majority.”

The Senate map is much simpler for members of the tribe. Several Jewish senators, all Democrats, are considered shoo-ins for reelection. Jackie Rosen (D-Nevada) is a narrow favorite to defeat incumbent Republican Sen. Dean Heller. If she wins, there would be eight Jewish senators, compared to seven now.

The Forward will update this analysis periodically in the weeks leading up to Election Day and will issue new projections on the number of expected Jewish representatives.

In the House races, from Orange County, California and Palm Beach, Florida to suburban Seattle and Staten Island, New York, Jewish Democratic newcomers are poised to make big inroads in districts that were once safe havens for fairly moderate Republicans.

Meanwhile, Jewish incumbent members of Congress, mostly Democrats in deep blue districts, are largely facing minor challenges and look set to return en masse after the November vote. Those include familiar faces like Jerrold Nadler on Manhattan’s West Side, Adam Schiff in the Los Angeles area and Debbie Wasserman-Schultz in south Florida. 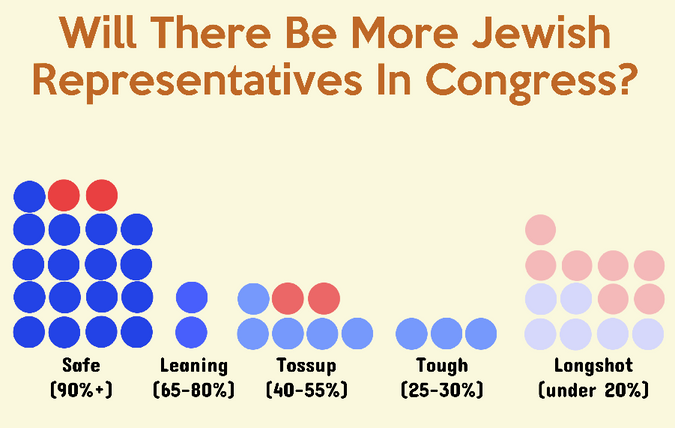 Two seats held by Jewish Republicans are set to remain in Jewish hands. David Kustoff (R-Tennessee) is an overwhelming choice for reelection after winning an unexpectedly tight GOP primary. Lee Zeldin (R-New York) is facing a stiff challenge for his Long Island seat. But Democrat Perry Gershon is also Jewish.

The Forward analysis starts with some simple math: there are 23 seats held by Jews in the current Congress, including 21 Democrats and the two Republicans.

Three popular Democrats are retiring or seeking higher office, including Rosen and Jared Polis (D-Colorado), who is vying to be governor. There no Jews running to replace them. The third is retiring Sander Levin (D-Michigan), whose strongly Democratic seat is likely to stay in Jewish hands since his son won the Democratic primary nod.

That leaves 21 safe Jewish seats, which might appear to be a daunting electoral hill to climb to reach 25.

But a 22md seat will certainly be occupied by a Jew because of a quirk in a newly drawn district in Pennsylvania’s Lehigh Valley, where Democrat Susan Wild is facing off against Republican Marty Nothstein. Wild is leading but in any case both candidates are Jewish.

An unusually large number of Jewish newcomers — mostly Democrats — are in strong positions to win their races among the nearly 50 Jewish major party candidates who are running for Congress. With liberal enthusiasm running high, Democrats are about 8% ahead of the GOP in polls of the so-called generic congressional ballot, which asks what party respondents want to see control the House.

Nine Jewish Democratic challengers are in fairly strong contention (meaning a greater than 10% chance) to win seats against non-Jewish Republican incumbents or where non-Jewish GOP lawmakers are retiring. One Jewish Republican, Lena Epstein, is in a similar position as she won a Republican primary to replace retiring GOP Rep. David Trott in Michigan’s swingy 11th District.

Many of these districts are broadly similar to Ohio’s 12th district, in which a Republican is clinging to a razor-thin lead after a dramatic special election in August. They mostly span suburbs, where Democrats and moderate Republicans alike are revolting against Trump, and more-rural areas where Trump remains very popular.

The big problem for Republicans? Analyses of the Ohio race and several other primaries and special elections show that anti-Trump voters are turning out in far greater numbers than his supporters.

Of course, the strong crop of Democratic candidates could also be an Achilles heel for Jewish candidates if the political winds shift between now and November. If the much-vaunted #BlueWave falters nationally, most of the Jewish Democratic insurgents will also likely fall short, capping the gains.

A large number of Jewish candidates are backed by the Democratic Congressional Campaign Committee’s Red-to-Blue campaign, a barometer of establishment confidence. Several of them are outraising their GOP opponent.

The Jewish Democratic insurgent with perhaps the strongest chance of winning is Mike Levin, who outpolled Democratic rivals to win a spot in the general election for the seat now held by retiring Republican Darrell Issa.

Like most of California, the diverse Orange County district has been trending blue and voted for Hillary Clinton in 2016. More Democrats than Republicans voted in last month’s so-called “jungle primary,” which analysts say means Mike Levin is strongly favored in November.

Dean Phillips, whose grandmother was the advice columnist Dear Abby, is running against incumbent Republican Erik Paulsen in Minnesota’s third district outside of Minneapolis, which both Hillary Clinton and Barack Obama carried. He has opened up a lead in polls and even Republicans are pessimistic about their chances of holding onto the seat.

The Democrats also have a slew of strong Jewish female contenders in a year that is expected to see a surge in college-educated women voters.

Elaine Luria, who is running against Republican Scott Taylor in Virginia’s second district, is one of four women eying GOP held seats in the state that is trending Democratic. Kathy Manning, the former chair of the Jewish Federations of North America, is running close to freshman Republican Ted Budd in North Carolina’s 13th district, which stretches from the suburbs of Greensboro through the middle of the state.

In the Pacific northwest, Kim Schrier has won a spot in a marquee matchup for a swing seat in Washington state’s eighth district, which covers a large area east of Seattle and has been trending Democratic over the past few election cycles. Schrier is favored over Republican Dino Rossi because more Democrats voted in the top-two “jungle primary” than Republicans.

Max Rose is offering a stiff challenge to incumbent Rep. Daniel Donovan for New York’s 11th district, which covers the traditional Republican stronghold of Staten Island, and parts of Brooklyn. Rose, a military veteran with a Purple Heart, managed to out fundraise Donovan, and had nearly $900,000 cash-on-hand in early June.

On the state’s Gulf Coast, David Shapiro is taking on Vern Buchanan, a longtime incumbent who has rarely faced any meaningful challenge.

Geoffrey Skelley, an editor with Sabato’s Crystal Ball at the University of Virginia, said Jews are already over-represented in Congress compared to their share of the total population, making up about 5% of all House members. That is in part because Jewish voters tend to be clustered in and around large population centers like New York, South Florida and Southern California. The Forward’s election projection uses input from venerable forecasters including the Cook Political Report, Sabato’s Crystal Ball and Inside Elections.

The Forward has assigned a real-time probability of each Jewish candidate winning his or her race. Those probabilities produce a weighted average of expected outcomes across all the races involving Jewish candidates, leading to a predicted number of Jewish winners and a confidence range associated with that prediction.

Each race will be updated periodically from now till November as the primaries wrap up by mid-September and to account for changes in the national and local political climate.

FullStack Labs CIO, Dr. Benjamin Carle, who has a Ph.D. in computer science and is an expert in data structures and algorithms, helped create the projections.