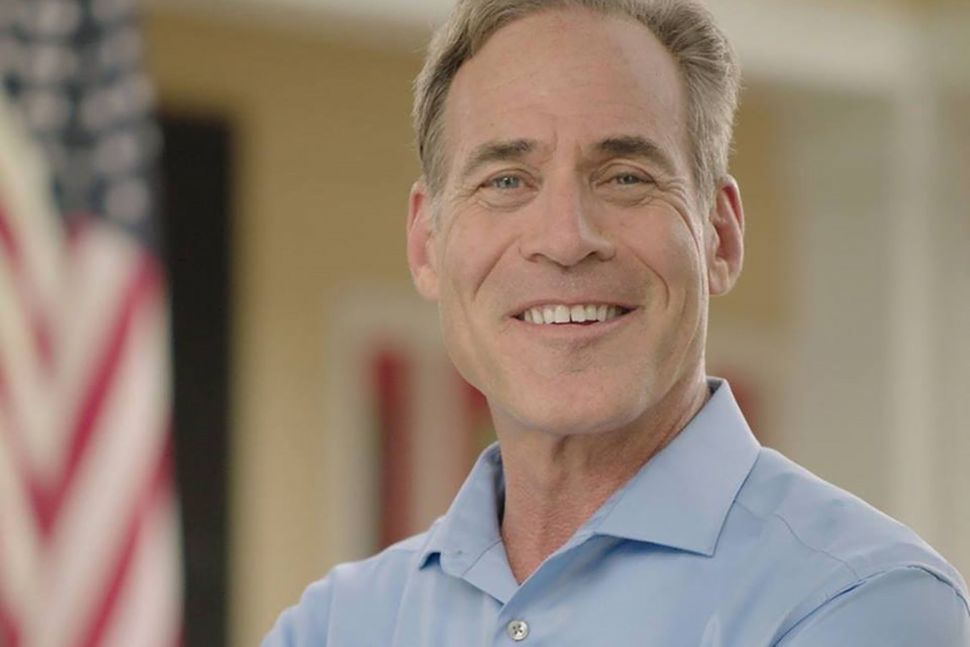 In a more traditional election year, a centrist Democratic running in a southwest Florida district that went for President Trump by 11 points wouldn’t get much national attention. But this is no typical political season.

David Shapiro is one of a crop of strong Jewish candidates running in districts where Democrats have not been competitive for decades. He’s trailing six-term Republican incumbent Rep. Vern Buchanan by only four percentage points, according to a recent internal poll — another piece of data pointing to a “blue wave” in the midterms that could flip the House.

“I think the polling shows we’re within striking distance,” Shapiro’s campaign manager Alex Vuskovic told the Forward on Wednesday. “We’re running an incredibly strong grassroots game. Given the year we’re in it makes the race competitive.”

Indeed, Democrats continue to look strong in national polls. The party has been leading the generic Congressional ballot by about eight points. Election forecaster FiveThiryEight is giving them a better than 75% chance of taking back the House.

Jewish representatives are also poised for a big boost in the next congress, a Forward analysis showed.

Shapiro, a 59-year-old lawyer from Siesta Key, is backed by the Democratic Congressional Campaign Committee’s Red-to-Blue campaign and has raised over $1.3 million, with more money sure to flow in through the general election. The DCCC is helping with fundraising support and running ads in local markets.

Shapiro has been campaigning against Buchanan on a more moderate message compared with firebrands like Alexandria Ocasio-Cortez who are looking to upend the Democratic establishment. He recently said he would not vote for Nancy Pelosi as House speaker, a position has been adopted by other Democratic moderates like Conor Lamb in Pennsylvania and Max Rose in Staten Island.

The lawyer’s platform includes raising the minimum wage, but doesn’t mention a goal of $15, the Holy Grail for progressive groups pursuing that policy. He says he wants to reduce prescription drug costs and insurance premiums, but stops short of calling for a single-payer healthcare system. His campaign site says he will be a “zealous supporter of the U.S. Israeli relationship, and of Israel’s right to exist—in peace and security—as a Jewish, democratic state.”

Vuskovic said Shapiro has also supported Republicans in the past and is willing to work in a bipartisan fashion.

“I’m going to gladly parade that around in a general election in a district Trump won by 11 points,” the campaign manger said. “David knows not all the good ideas come from one side of the aisle.”

It’s a message that is playing surprisingly well in the sweltering subdivisions and tony condo complexes along Florida’s Gulf Coast that have traditionally been reliably Republican.

“If Shapiro could barely beat a no-show candidate in the Democrat primary after outspending her 50-to-1, he sure isn’t within striking distance of Vern,” spokesman Max Goodman told Florida Politics. “The fact that he would release a phony poll after such a poor showing shows just how demoralized and panicked he is.”

A number of other Jewish moderates have been polling well in districts that have not historically had Jewish representatives.

Dean Phillips now has a better than 60% chance of upsetting incumbent Erik Paulsen in a suburban Minneapolis district, according to an analysis done by the Forward. Mike Levin is an 80% favorite to flip a key Republican-held Orange County, California seat. And Jewish community leader Kathy Manning has a solid 35% shot of turning a district near Greensboro, North Carolina.

Vuskovic hopes Shapiro can ride that wave of moderate, suburban districts turning a little more blue. “We need to communicate our message and get out there and we have a real chance of winning this,” he said.

Buchanan’s office did not return a request for comment.