Rashida Tlaib And Her ‘Squad’ Of Israel Critics Own The Future 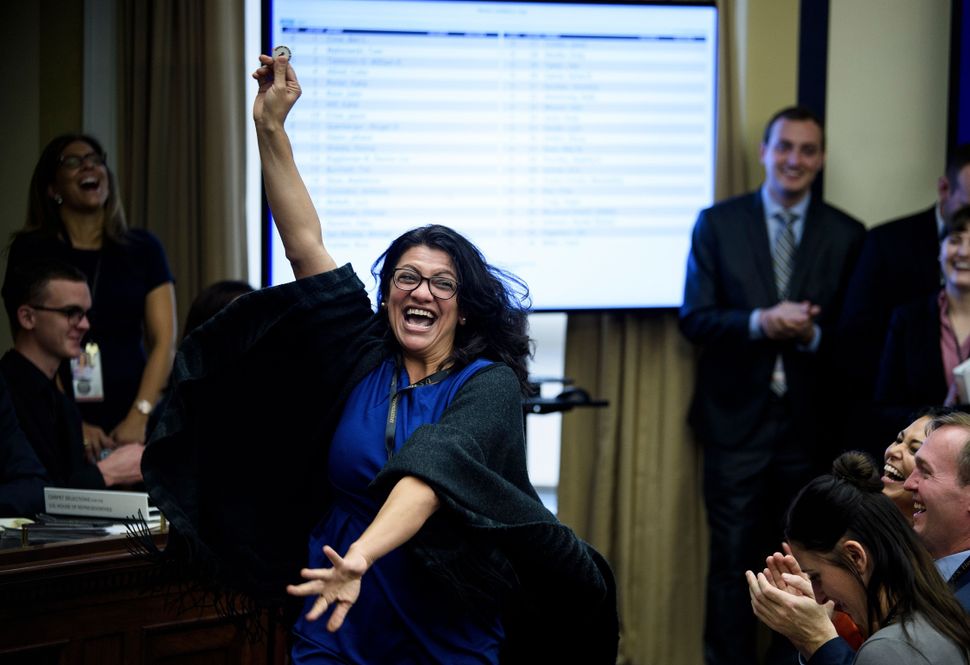 If you want to understand the divide inside the congressional Democratic Party on Israel, consider two events from earlier this week. On Sunday night, Nancy Pelosi and Charles Schumer, the Democratic leaders of the House and Senate, sat on stage at the Israeli-American Council, an organization funded, in part, by Sheldon Adelson. Alongside Schumer and Pelosi sat another IAC benefactor, Haim Saban. Saban’s name graces an AIPAC program for college students. He’s said that rather than negotiate with Iran, he “would bomb the living daylights out of these sons of bitches.”

Pelosi reassured the IAC crowd that legislators who shared their views on Israel would head the powerful Appropriations and Foreign Affairs Committees when Democrats take control of the House next year. “You couldn’t have two stronger supporters of Israel” than Nita Lowey (the incoming Appropriations Chair) and Eliot Engel (the incoming Foreign Affairs Committee Chair), Pelosi declared. Lowey is 81 years old. Engel is 71. Pelosi herself is 78. Schumer is 68. Saban is 74.

A day later, on Monday, newly elected Democratic Representative Rashida Tlaib, a 42-year old Palestinian-American from Michigan, announced that rather than join AIPAC on the Israel trip it organizes every two years for newly elected members of Congress, she would organize her own. According to The Intercept, which broke the story, the trip “will focus on issues like Israel’s detention of Palestinian children, education, access to clean water, and poverty.”

At first glance, it seems an almost comical mismatch: the most powerful Democratic leaders in Congress versus one, newly elected, member. But appearances can be deceiving. Every year, Democrats in Washington move closer to Tlaib’s view of the Israeli-Palestinian conflict and further from Engel, Lowey, Pelosi, Schumer and Saban’s.

The primary reason is generational. A few years ago, the Columbia University historian Rashid Khalidi told me the American debate over Israel would shift when Palestinian-Americans “produce our lawyers.” What he meant was that Palestinian-Americans only entered the United States in significant numbers after the 1965 Immigration and Naturalization Act opened America’s doors to non-Europeans and the 1967 war produced a new wave of Palestinian displacement.

Like many other immigrants, Khalidi was suggesting, first generation Palestinian-Americans often did not feel comfortable enough in the United States to participate politically. Their children, however — “our lawyers” — would.

On college campuses, Khalidi’s prediction has been coming true for a while now. On many campuses, second generation Palestinian-Americans, eager to avenge their parents’ suffering, have led the movement to Boycott, Divest from and Sanction Israel. What makes the members of this second generation effective is their Americanism — their ability to speak fluently the language of the American left.

They are also Americans of color, which makes them effective ambassadors to the African American, Latino, LGBT and Asian-American activists they recruit to the Palestinian cause.

Tlaib is replicating that dynamic in Washington. She was born in 1976, around the time most Palestinian-Americans were coming to the United States. She is entering a Democratic House Caucus in which, for the first time, white men will comprise less than 40%. And she is already proving influential with other left-leaning people of color.

On Instagram, Alexandria Ocasio-Cortez recently posted a photo of herself, Ayanna Pressley, Ilhan Omar and Rashida Tlaib under the caption: “squad.”

Were young white Democrats as supportive of the Israeli government as Lowey, Engel and Schumer, they might blunt Tlaib’s influence. But even young Jews are increasingly critical. A 2013 Pew Research Center poll found that American Jews under the age of 30 were almost as likely to say the United States was “too supportive” of Israel as “not supportive enough.” American Jews over 65, by contrast, answered “not supportive enough” by a margin of more than six to one.

Tlaib, in other words, embodies a generational shift that is occurring across her party. In January of this year, the Pew Research Center asked Democrats whom they sympathized with more: Israel or the Palestinians. When I asked Pew’s researchers to break down the numbers by generation, the contrast was stark. Democrats over the age of 65 favor Israel by 12 points. Democrats under 34 favor the Palestinians by 11 points.

This generational shift won’t transform the congressional Democratic Party overnight. And it’s unlikely to push most Democrats as far left as Tlaib, who (unlike me) supports BDS. But for Schumer, Pelosi and Saban, the problem isn’t merely that younger Democrats don’t share their views of Israel. It’s that other institutional underpinnings of unquestioned Democratic support for Israel are eroding too.

One of those underpinnings is big money. There’s nothing anti-Semitic about noting that AIPAC, like the NRA, the Pharmaceutical industry and many other Washington lobbies, wields influence by bundling large donations to members of Congress. AIPAC operates through a network of “key contacts”: AIPAC members who develop personal relationships with — and raise money for — individual legislators, who they also personally lobby. But more and more progressive Democrats are funding their campaigns the way Bernie Sanders did in 2016 and Beto O’Rourke did this year: By leveraging social media to amass vast numbers of small donors. This makes them less dependent on big, AIPAC-aligned donors like Haim Saban, and more likely to reflect the views of the Democratic base.

Another institutional underpinning is ignorance. As the Intercept has reported, AIPAC’s education arm, the American Israel Education Foundation, has taken 363 lawmakers and 657 congressional staff members to Israel over the last decade.

The genius of these trips is that they create the illusion of first hand knowledge. Politicians and their staffers see Israel’s remarkable achievements. And they hear from Israel’s political, military, journalistic and business elites, many of whom depict Palestinians as threatening and uninterested in peace. But the trips give American politicians little opportunity to hear from Palestinians themselves, or to see what it’s like to live in the West Bank, let alone Gaza, under Israeli control but without basic rights.

It’s like going on a trip to the United States and hearing dozens of prominent white Americans talk about race without talking to a black activist or visiting a black neighborhood. In this way, the organized American Jewish community, which consists largely of people who themselves frequently visit Israel without talking to Palestinians, exports its own ideological cocoon to Washington.

That’s what makes Tlaib’s trip so important. When Americans leave the AIPAC cocoon, the effect is frequently transformative.

In 2011, I asked a former senior state department official about visiting the West Bank. “You saw the boulders on the roads [leading to Palestinian villages] and there was a kind of silence and people were careful,” the official replied, “but it was like my God, you crossed that border [and] it was apartheid.”

After meeting West Bank Palestinians on a trip organized by the nonprofit group Encounter a few years ago, an American Jewish official testified that, “I felt like I had never been to Israel before, and I am considered a professional Israel expert who travels to Israel several times a year.”

Democratic leaders know their party is changing. In his remarks to the Israeli-American Council, Schumer lamented that “young people” don’t recognize that Israel’s existence remains “precarious.” As the Jewish Journal put it in their description of the event, Schumer “added he thinks young people could be kept apprised online.”

Indeed, they could. Or they could go and see for themselves.

They could see not only the beauty and wonder of Israel but also the horror of holding millions of Palestinians without citizenship, free movement and due process for more than fifty years.

Tlaib is betting that once large numbers of Congressional Democrats see that, the days when Democratic leaders sit alongside Haim Saban at organizations partially funded by Sheldon Adelson will come to an end. And she’s probably right.

Rashida Tlaib And Her ‘Squad’ Of Israel Critics Own The Future