Why Is Rashida Tlaib Letting AIPAC – And Bibi – Off The Hook 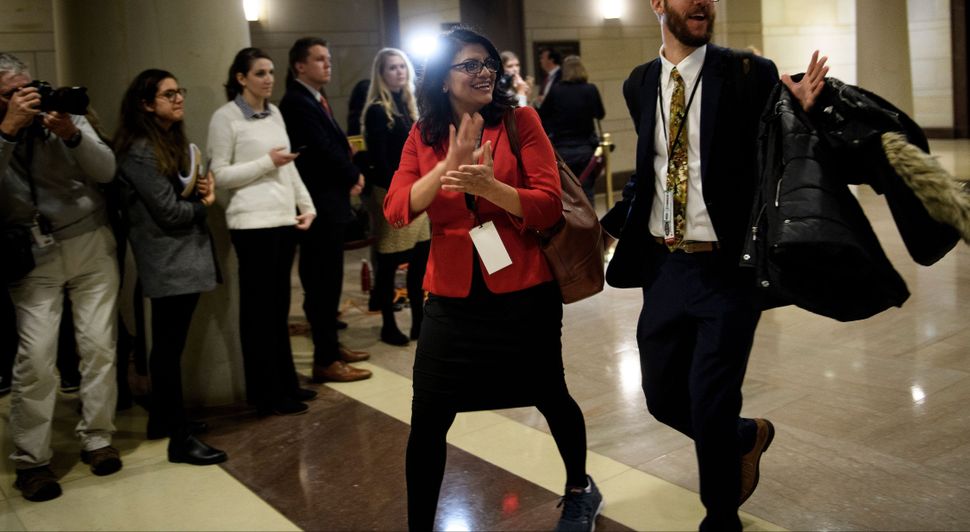 In a major scoop, The Intercept revealed on Monday that Rashida Tlaib, the first Palestinian to enter U.S. Congress, would be leading her own delegation to the West Bank, instead of taking the trip to Israel sponsored by the American Israel Public Affairs Committee.

The AIPAC trip is something of a rite of passage for freshman Congress members, and Tlaib’s vocal refusal, coupled with a full endorsement of the movement to boycott Israel, is sure to be controversial.

“I want us to see that segregation and how that has really harmed us being able to achieve real peace in that region,” Tlaib told The Intercept. “I don’t think AIPAC provides a real, fair lens into this issue. It’s one-sided,” she went on, explaining that AIPAC has “these lavish trips to Israel, but they don’t show the side that I know is real, which is what’s happening to my grandmother and what’s happening to my family there.”

This is no doubt true. And yet, the way Tlaib has chosen to redress this imbalance represents a missed opportunity. Ultimately, her decision will be more controversial than it will be influential.

Few Palestinians get the chance to address the AIPAC delegation, as The Intercept noted. The 2017 freshman trip included just one meeting with a Palestinian official over the seven-day trip, and one meeting with the former director of Peace Now. This is no accident. By giving them such a one-sided view of the conflict, the trip actually handicaps Democratic representatives in Congress when they return to the U.S. As one veteran Capitol Hill staffer told The Intercept, “The progressive members leave with a bad taste in their mouth. If you’re a freshman, you disengage on Israel-Palestine issues because you quickly realize after the trip it’s not worth it to butt heads with leadership.”

AIPAC is not about to start bringing its delegation to Hebron to witness the streets Palestinians are forbidden from walking on, or to hear from non-violent Palestinian activists like Issa Amro, who had urine thrown on him by settlers while he tried to show a group of Americans what the occupation looks like up close.

But if Tlaib went on the AIPAC trip, there would be a Palestinian at every single stop.

This would be an absolute game changer. Tlaib was offered the chance of a lifetime, a chance no one else has ever been offered: to represent the Palestinian cause in the context of Israeli politicians trying to make their case to the congress that funds them. She was offered access to the highest echelons of the Israeli state apparatus — including Prime Minister Benjamin Netanyahu — access the rest of us, including us journalists, only dream of.

And for the life of me, I can’t figure out why she would turn down that opportunity.

Of course, she should lead a delegation of newly elected American politicians to meet her grandmother in her Palestinian village in the West Bank. I hope every Democratic and Republican freshman goes with her. There is nothing like walking through checkpoints yourself, walking down streets you are allowed to walk on and your Palestinian guides are not, to bring the visceral ugliness of the occupation into your veins.

But why would anyone — especially a Palestinian — give up the opportunity to represent their cause to U.S. Ambassador David Friedman, or Israel’s Prime Minister?

It’s not for lack of nerve; Tlaib is no shrinking violet. She once interrupted a speech by then-Republican candidate Donald Trump at the Detroit Economic Club in 2016, and had to be forcibly removed.

So why shrink now from such an unprecedented opportunity to present her cause, as an American politician with a vote in Congress behind her?

The Israeli-Palestinian conflict has already proven to be an area where Tlaib is vulnerable to pressure from the far left. She began her campaign with an endorsement from J Street, promising to support a two-state solution and aid to Israel. But after pressure from Palestinian activists, she flip-flopped, telling interviewers that she now supports a one-state solution and withdrawing aid to Israel.

“One state,” she said. “It has to be one state. Separate but equal does not work.”

More importantly, she showed that she was subject to pressure. And it’s hard not to see something similar happening here. Given how much impact she could have on the AIPAC trip, Tlaib’s refusal to go seems to reflect a fear of angering supporters of BDS on the far left, who view normalization of relations with Israelis as the ultimate crime.

If Tlaib intends to boycott Israel for the extent of her time in office, she’ll find herself even less able to influence her peers on this crucial topic. It’s a shame, given how necessary her voice is.

Tlaib has yet to realize that she’s no longer on the outside agitating for change; she’s on the inside, with access to the most powerful people in the world — people who rely on her vote in Congress for existential help. And while she’s just got the one vote, her voice could be a powerful one. Already she is joined by Ilhan Omar, representative elect of Minnesota, who also supports BDS.

Rather than caving to pressure from the left and taking controversial positions that are ultimately not influential, Tlaib should recognize the power she has, and wield it for the causes that matter to her, not least because her perspective — that the dispossession of Palestinian rights is an urgent issue for a politician in the U.S. — is a desperately needed one.

It’s one she should take with her on the AIPAC trip, before taking the entire delegation to meet her grandmother in the West Bank.

Neither AIPAC nor Tlaib responded to requests for comment.

Why Is Rashida Tlaib Letting AIPAC – And Bibi – Off The Hook