Before a historic primary election victory catapulted her into the national spotlight, Rashida Tlaib offered an intriguing bona fide when explaining her compassion for both sides of the Israeli-Palestinian conflict: One of the co-chairs of her campaign is Jewish.

Former Michigan state Rep. Steve Tobocman wasn’t merely a hired hand for this year’s race: The grandson of a family slaughtered in the Holocaust gave the Palestinian-American Tlaib her start in politics and has since shepherded her to several historic milestones.

“We’ve been friends for over a decade and pretty close professional friends around her political career,” said Tobocman, 48, in an interview last week in the downtown co-working space from which he operates his nonprofit community development firm, Global Detroit. “She would describe me as a mentor of hers.” 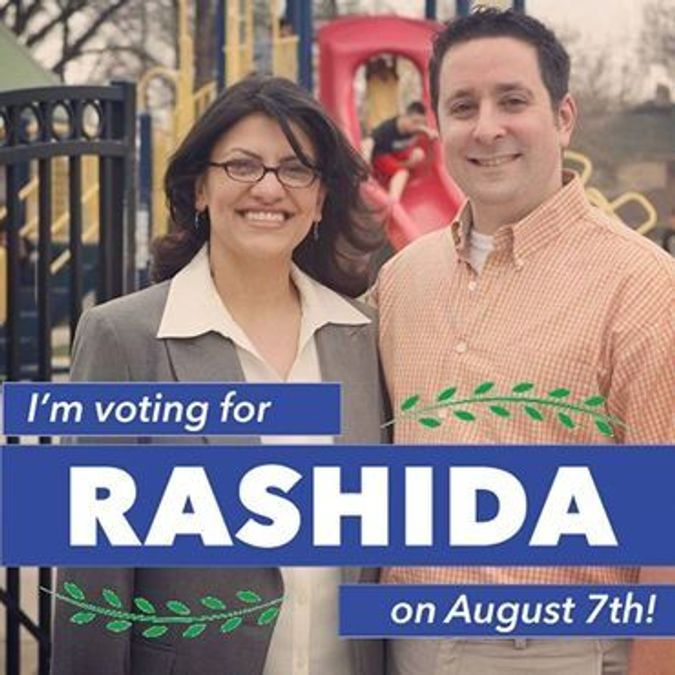 Now, Tlaib stands to become one of the first two Muslim women elected to Congress when she runs unopposed for a Detroit-based seat in November.

But despite their groundbreaking political alliance, they have not been on the same page when it comes to Israeli-Palestinian policy.

Tobocman insisted to the Forward that Tlaib “supports a two-state solution and U.S. aid to Israel.” But Tlaib told a liberal magazine that “it has to be one state.”

In 2007, Tobocman hired Tlaib, then a 31-year-old working for a Detroit-area social services non-profit focused on Arab-Americans, as an immigrant-outreach aide in his legislative office. The next year, unable to run again in his southwest Detroit district because of term limits, Tobocman helped guide Tlaib’s campaign to succeed him in the Michigan House, where she became the first Muslim elected to serve.

Then, late last year, when Rep. John Conyers Jr. resigned amid sexual harassment allegations after more than 50 years in Congress, Tobocman enthusiastically encouraged Tlaib to run. She served three terms in the Michigan House before running unsuccessfully in 2014 for the state Senate, but her political profile got a renewed boost in the summer of 2016 when she was hauled out of Detroit’s Cobo Center after interrupting then-candidate Donald Trump at a campaign rally to ask if he’d ever read the U.S. Constitution.

In Tlaib, Tobocman found a kindred spirit driven to address the plight of society’s poor, disadvantaged and marginalized. Her political identity was formed as the eldest of 14 children of Palestinian-born immigrant parents with grandparents still living in the West Bank; his came from an upbringing at the Birmingham Temple, a suburban Detroit synagogue known for its secular humanistic approach to Judaism pioneered by the influential rabbi Sherwin Wine. His grandmother immigrated to the U.S. from Poland after marrying his grandfather in the 1930s, leaving behind several siblings and parents who would be murdered by the Nazis. That grandmother went on to belong to the Workmen’s Circle, a legendary progressive advocacy group for Jewish-American immigrants.

Rather than return to the wealthy suburbs of his youth after earning his law degree, Tobocman moved to one of the poorest parts of Detroit as an AmeriCorps volunteer and eventually co-founded Michigan Community Resources, a legal not-for-profit for the state’s indigent population. His activism and his election to the legislature eventually put him in Tlaib’s orbit, where an invaluable personal and professional friendship flourished.

“On a day-to-day basis, there’s nothing about my being Jewish or her being Palestinian or Muslim that impacts 99.5% of the work we’ve done together,” he said. “But we both see our ethnic and religious identities and historical experiences as core components of our personal journey as social justice advocates and public servants. We have had a lot of different experiences, but we’ve come, I think, to the same conclusions.”

That may be generally true, but over the past week Tobocman and Tlaib have started to seem a bit out of sync on the question of how to address the Israeli-Palestinian conflict. Since the Aug. 7 primary, when Tlaib effectively clinched her seat in Congress because she has no Republican opponent in November, her opinions on the matter have been under the international microscope – and appear to be evolving in real time.

During the campaign, the liberal Jewish political action committee J Street endorsed her under the understanding that Tlaib supported the two-state solution and “all current aid to Israel and to the Palestinian Authority,” as her now-removed profile on the PAC’s site read. But on Aug. 13, six days after her election, she told Britain’s Channel 4 she would “absolutely” vote against U.S. military aid to Israel. And she said to the progressive magazine In These Times in an interview published Tuesday that “it has to be one state.” She seemed to back off later in an interview on Aug. 16 with the Democracy Now! radio program, saying she could support a two-state solution “if it was something of possibility.”

The confusion was enough for J Street to rescind its endorsement on Aug. 17 “after closely consulting with Rashida Tlaib’s campaign to clarify her most current views on various aspects of the Israeli-Palestinian conflict” and finding “a significant divergence in perspectives.” J Street, which had never before withdrawn support of a candidate, removed Tlaib’s profile and policy positions from its website. That information, J Street spokeswoman Jessica Rosenbaum told the Forward on Monday, originally came from a submitted position paper as well as “an extensive interview process.”

But just as the controversy over Tlaib’s views emerged, Tobocman told the Forward in an interview on Aug. 16 that she had told him within the prior day that “she supports a two-state solution and U.S. aid to Israel, and it comes from a belief that we ought to be focusing on peace, self-determination, respecting people’s human rights and using U.S. leverage to promote those things. That is the clear and sum total of where she’s coming from.”

Tobocman did not respond to voicemail, text or email attempts since that interview to further reconcile the differences between what he said Tlaib told him in private and her recent public remarks. With the campaign over, Tobocman is no longer involved in Tlaib’s day-to-day activities, but her other co-chair, Andy Goddeeris, is expected to continue working for her in Washington D.C. He also did not respond to email and text efforts to clarify these divergent comments.

Still, during his sit-down with the Forward, Tobocman acknowledged upon reflection that he and Tlaib never really hashed out the finer points of her positions on Israel during the campaign.

“I had the sense that she identifies as a Palestinian, that her family has gone through certain experiences and that she’s concerned about the current state of affairs, and I knew that she also believes that Israel has a right to exist,” he said. “But the details just never came up.”

Indeed, Tobocman suggested to the Forward that some of the confusion came from the fact that up until recently, Tlaib has responded to questions about Israeli and Palestinian issues through the lens of personal experience more than of formal policy. On the seldom occasions during the campaign when she was asked, she answered by comparing the struggle of Palestinians to those of African-Americans in the civil rights movement. Tlaib returned again and again to her desire to obliterate physical barriers between Israelis and Palestinians – a notion that, in retrospect, might have been the signal that she prefers one state.

“Every time I think of that issue I think of my grandparents, I think of what our Jewish brothers and sisters went through, and I feel like all of the human aspect of the conflict has just gone out the door,” she told The Forward on July 29 on the sidelines of a get-out-the-vote rally in Dearborn, one of the largest and fastest-growing Arab-American communities in the nation. “We are segregating the communities more, dividing the communities more. I want to integrate both. I don’t want walls.”

Tobocman noted that the Israeli-Palestinian issue has shifted to the political backburner for many Muslim-Americans amid more pressing, direct domestic problems under President Trump. The president’s efforts to block Muslims from traveling to or seeking asylum in the United States and the spike in hate crimes and other forms of discrimination have left little room for a focus on the Palestinian question, he said.

“The stereotyping of Muslims has increased in ferocity in the wake of 9/11, and Trump is the first president who has overtly engaged in that stereotype in my lifetime,” he said. “Just imagine how Jews would feel if there was a ban that said no Jews are allowed to enter the country? They’re under attack here at home, so [the Palestinians are] just not the most pressing issue.”

It’s also unlikely that Tlaib’s views on Israel would have mattered much in the Detroit-area district she ran in, which is 55% African-American and among the nation’s poorest, with a 24.9% unemployment rate. A small portion of the district includes Dearborn Heights, another suburb with a substantial population of Muslims, but her campaign focused on engaging voters concerned about economic opportunity, civil rights and environmental racism. Tlaib’s campaign website made no reference to the Palestinian question, and she didn’t touch on the topic when she spoke at the Dearborn get-out-the-vote rally.

Tobocman does not believe that Jews ought to be wary of Tlaib. He said she has routinely expressed compassion for both sides of the Middle East dispute, offering a more nuanced view than is typically expressed by American politicians.

“It’s a breath of fresh air to have somebody who has that understanding and can be an advocate for Palestinian causes and at the same time can understand Jewish Israelis also aren’t comfortable with the current situation,” he said. “This could be something that works very well in the long-term interests of those who are advocates of Israel’s security.”

More significantly, Tobocman said, Jews should be especially proud as Americans of the religious landmark Tlaib and Ilhan Omar, a Somali-American Muslim woman who won her Democratic primary in an overwhelmingly Democratic Minneapolis-area district on Aug. 14, represent for the nation.

“As Jews, who have historically been victims of religious discrimination and religious genocide, we ought to be celebrating inclusive societies that allow minorities the full access of rights and freedoms that we should all enjoy,” he said. “The same American ideals, principles and values that allow a Muslim woman, be it a Somali refugee or the daughter of Palestinian immigrants, to get elected in districts that are not comprised of constituencies that come from their own religious or ethnic identity is the same idealism, values and structure that have allowed American Jews to become extremely affluent and influential and full members of American society.”

Steve Friess is an Ann Arbor-based freelance journalist whose work appears regularly in The New York Times, Playboy, The New Republic and many others. He tweets at @SteveFriess.