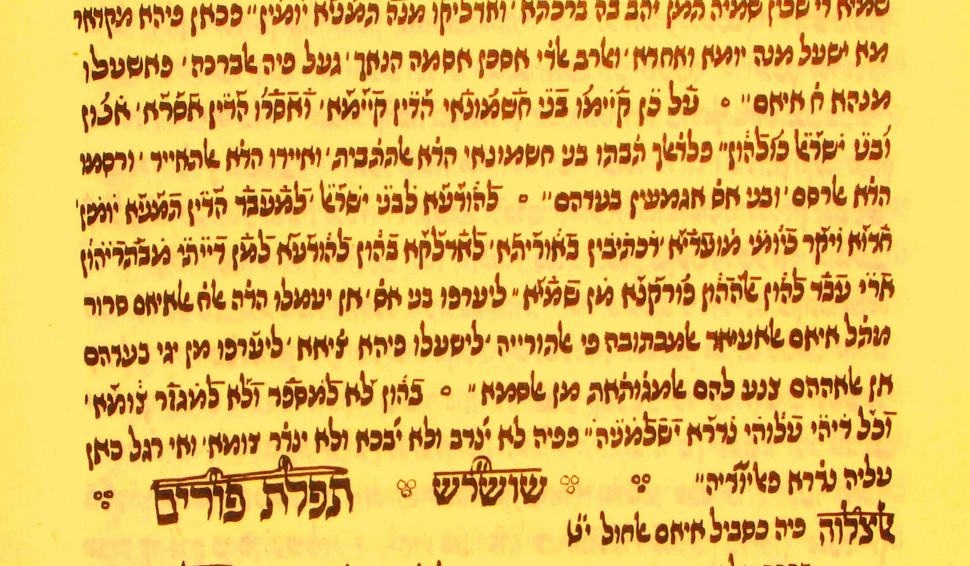 All cultures have a tendency to make their building blocks into part of a collective myth, oversimplifying them in textbooks and in the collective consciousness of their members.

We Jews are hardly immune from this impulse. Indeed, we have performed this very simplification upon a touchstone of our culture: the Hebrew language.

Hebrew plays a significant role in Jewish history and identity. After religion, it was the second most crucial factor unifying Jews for centuries, not linguistically so much as culturally. It was and continues to be the language used by rabbis in religious texts. Marriage contracts are written in Hebrew. The liturgy in Orthodox and Conservative synagogues is in Hebrew. And it’s used on traditional tombstone inscriptions.

But Hebrew was not always awarded this unique role. Despite its cultural significance and its “eternal” nature in our imaginations, there was a time in Jewish history where Hebrew simply vanished.

The fascinating history of Hebrew is described in William Chomsky’s excellent 1957 monograph, “Hebrew: The Eternal Language.” But there’s a period in Jewish history that receives almost no coverage in Chomsky’s book, possibly because the characteristics of this period belie the “eternal” part of “The Eternal Language.” It’s the period from the 3rd to the 6th centuries CE.

During these 300 years, there is simply no evidence that Jews were speaking or even reading Hebrew.

After the return from Babylonian captivity in the 6th century BCE, Aramaic replaced Hebrew as the vernacular for large portions of the Jewish population, especially in the Galilee and Samaria. But even for the southern province of Judea, the documented traces of vernacular Hebrew disappear during the 2nd century CE.

The Mishnah, the first portion of the oral Torah, is mainly written in Hebrew. Its compilation ended at the beginning of the 3rd century CE. After that, for several centuries, we also lose traces of Hebrew, even as a written language. In the Middle East, which included the Land of Israel and Babylonia, Aramaic, the language of the non-Jewish majority, became not only the main everyday language for Jews, but also the language in which the Gemara, the second component of the Oral tradition, was written.

In Mediterranean Europe and various Greek colonies in Africa, Greek and later Latin became vernacular languages of local Jews. In these areas, Greek was used as the main cultural language. For example, of 534 Jewish inscriptions found in catacombs of Rome and its neighborhood, dating mainly from the 3rd- and 4th centuries CE, 76 percent are written in Greek and 23 percent in Latin. Just three inscriptions are written in Hebrew and one in Aramaic, and two are bilingual: one is written in Greek-Latin and one in Aramaic-Greek.

Most crucially, some of the inscriptions contain direct quotes from the Greek translations of the Bible, meaning that at this time, Hebrew wasn’t even used for the regular recitation of Scripture or worship in synagogue. Similarly, Jewish tombstone inscriptions from before the 9th century in the territories of Spain, France, and Hungary are either Greek or Latin.

In other words, globally speaking, between the 3rd and the 6th centuries CE, Hebrew seems to disappear. It was only during the next centuries, following the gradual Arabization of the Middle East and the abandonment of Aramaic by both non-Jews and Jews, as well as the Muslim conquest of Spain, and the disintegration of the Western Roman Empire with Latin losing its role, that Jews in various countries started returning to Hebrew as their main cultural language.

To accomplish this feat, during the 7th-10th centuries, the Masoretes in the Land of Israel and Babylonia elaborated several systems of vocalization of the biblical text. And beginning in the first half of the 9th century, all the inscriptions in that region were written exclusively in Hebrew. By the turn of the second millennium, the same was already true for other countries of Western Europe.

Despite Hebrew disappearing for a few hundred years, the mythology of its eternal nature remains. Some of this is based on pseudo-data, for example, given names. For example, throughout history, many Jewish men have had two names, one religious and known as shem ha-qodesh or the “holy” name, and one secular, known as kinnui or moniker. The former is usually biblical or post-biblical, in Hebrew or Aramaic, so these names have always been understood to have been inherited from antiquity, evidence of an unbroken chain of Hebrew.

But nothing could be further from the truth.

In fact, the tradition of having a Hebrew name seems to have been established only during the last centuries of the first millennium. During the first centuries CE we find very few examples of Jews having two names. Some rabbis from the 3rd-5th centuries mentioned in the Talmud bear names that are either Greek (Antigonos, Dositheos, Hyrkanos, Petros, Philippos, Theodoros, and Tryphon) or Latin (Agrippa, Drusus, Julianus, Justus, Rufus, and Titus).

During the same period, numerous biblical names were “restored.” For example, Elijah is unknown in antiquity. No mention of the names Abraham, Asher, Dan, David, Gabriel, Gad, Isaiah, Israel, Joel, Raphael, Samson and Solomon appear in the Talmud, and only a few bearers of the names Aaron and Moses. Yet during the first centuries of the second millennium CE, many names from the above list were among the most frequently used Jewish names in the Middle East, France, Germany, Italy, and Spain.

It is well known that since the Middle Ages, in many countries of the Diaspora, Jews were using given names whose meaning in local languages was identical or at least close to that of some Hebrew names. Among the examples from Italy are Benedetto, meaning blessed, Donato meaning given, Gaio meaning merry, Pace meaning peace, and Servadio meaning servant of God. These were kinnuim for Hebrew Baruch, Nathan, Isaac, Shalom, and Obadiah, respectively.

Numerous examples also exist for Ashkenazim, though in Ashkenaz, the relationships between Hebrew names and those based on the vernacular language, which was Yiddish, is more complex. Some names appeared after the inverse translation, from Yiddish to Hebrew, like the “animal” series: Zvi from Hirsh meaning stag, Dov from Ber meaning bear, and Ze’ev from Wolf. These Hebrew names are unknown before the second half of the 16th century. It was also during this period that the name Aryeh, for which a few references are known already during the Middle Ages, became popular among Ashkenazim; this change was influenced by the common use of the Yiddish name Leyb, meaning lion.

All of this is to say that first names in no way indicate the continuity of Hebrew. And neither do last names. It is a common belief that last names based on Hebrew words represent the oldest layer of Jewish surnames. For Eastern Europe, this is certainly false. In that region, family names were acquired by Jews at the turn of the 18th-19th century following laws promulgated by Christian authorities.

Before that period, the only existing surnames were those used in certain rabbinical dynasties, all of which came from Central Europe. Among them, very few are based on Hebrew words (Shor, Teomim), and just one on a Hebrew female given name (Margolis/Margulis). All others are Yiddish or German: Halpern, Landau, Frenkel, Lipschitz, Horowitz, Mintz, Katzenellenbogen, Auerbach, Ginzburg, etc.

The 20th century saw a mass Hebraicizing of surnames in Israel. Before that though, the Russian Pale of Settlement was the area with the highest number of surnames based on Hebrew. It was only after the law of 1804 that numerous Jews received family names like Kogan/Kagan (from Cohen), Levin/Lev (from Levi), Sandler meaning shoemaker, Melamed meaning teacher, Khait meaning tailor, and numerous other names, words and expressions taken from the biblical text or Jewish prayers (Adonoylom, Borukhborshmoy, Isyemini, Katalkherman, Azarkhi, Gilodi, Ashkaluni, Efros, Gilbo, Khidekel), letter names (Lamed, Nun), acronyms of famous Jewish scholars (Rambam, Rashal, Rashbam) and many others.

But all these surnames are not older or more numerous than surnames based on Yiddish, German or Slavic languages. And all of them appeared during the same period.

Surnames from Spain and North Africa are often centuries older than those of Ashkenazic Jews. Cohen and Levi are particularly old. But they, too, are not inherited from biblical times.

Globally speaking, hereditary family names are known before the 10th century neither for Jews, nor for Christians. In the Muslim naming tradition, there were older surnames, which is why the earliest hereditary names used by Jews appear in countries under Muslim rule. Among the earliest examples of Jewish surnames are Ibn Shaprut (Andalusia, 10th century), Ibn Baqara, Ibn Yijû, and Ibn Jâmi‘, which all come from the documents in the Cairo Geniza and date back to the 10th-12th centuries. They are of Arabic origin. None of the oldest known Jewish surnames from Morocco (Ibn Susan, Ben Abbas, Ibn Aknin, Ammar, Ben Zekri, Djian, all from the 12th-13th centuries) is of Hebrew origin.

Absence of proof is not proof of absence, unless you’re talking about living languages, without which we humans cannot live. And when it comes to Jews, they lived for a period of 300 years without the Hebrew language.