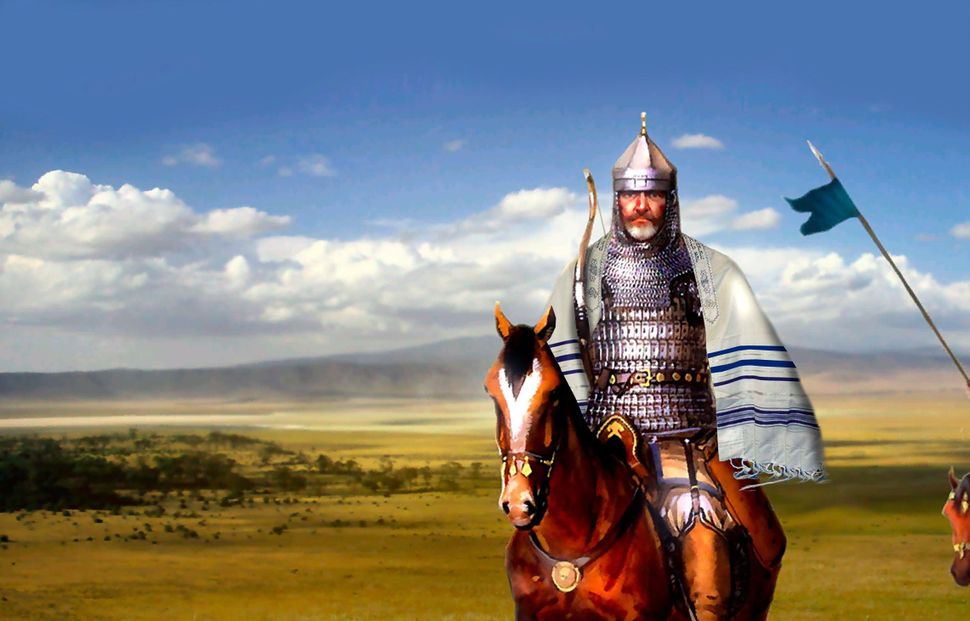 In 2010 I was contacted by the chief editor of a volume called “Khazars: Myth and History,” put together by the Russian Academy of Sciences. She knew my books on Ashkenazic names, and was familiar with my ongoing study of the history of Yiddish, eventually published by Oxford University Press in 2015 as “Origins of Yiddish Dialects.” The editor wanted me to write a paper explaining the traces of Jews from medieval Khazaria that she was certain I had observed in my research.

I tried to politely decline her proposal. I told her that my paper on that topic would be too short for inclusion, because it would consist of just one sentence: “The corpus of personal names and surnames borne by Jews in Eastern Europe during the last six centuries, as well as the Yiddish language as a whole, do not contain any link to Khazaria.”

The editor insisted that if I was so convinced of this argument, I should write it up, for it would be of interest to both experts and lay readers. I finally agreed and wrote a paper.

The paper allowed me to formulate some methodological principles about working in what are sometimes called “soft sciences.” Historiography and linguistics are not formal disciplines like mathematics or logic; nothing can be proved definitively. This allows for the introduction of what we might call “junk science” — a category to which the Khazarian hypothesis belongs.

Nevertheless, the absolute lack of any fundamental proof for the theory has not stopped it from catching the imaginations of geneticists, linguists and hordes of lay folk alike.

Since the late 19th century, the so-called “Khazarian theory” has promoted the idea that a bulk of Ashkenazic Jews living in Eastern Europe descended from medieval Khazars, a semi-nomadic Turkic people who founded a powerful polyethnic state in the Caucasus and north to the Caspian, Azov and Black seas. The theory received a recent boost with the 1976 publication of “The Thirteenth Tribe,” a book by Arthur Koestler. Most recently, the Khazarian hypothesis has been promoted by authors like the Tel Aviv University professor of history Shlomo Sand and Tel Aviv University professor of linguistics Paul Wexler, as well the geneticist Eran Elhaik.

Despite this institutional backing, the theory is absolutely without evidence. As any historian will tell you, generations of Jews, like generations of any people, leave historical traces behind them. These traces come in multiple forms. For starters, people leave behind them historical documents and archaeological data. Predictably, archaeologic evidence about the widespread existence of Jews in Khazaria is almost nonexistent. While a series of independent sources does testify to the existence in the 10th century of Jews in the Kingdom of Khazaria, and while some of these sources also indicate that the ruling elite of Khazaria embraced Judaism, the Khazarian state was destroyed by Russians during the 960s. In other words, we can be confident that Judaism was not particularly widespread in that kingdom.

The next historical record of Jews — in a few cities that today belong to western Ukraine and western Belarus — shows up in the 14th century, when Jews are regularly referred to in numerous documents.

And yet, no direct historiographical data is available to connect the Jews who lived in Eastern Europe in the 14th century with their co-religionists from the 10th-century Khazaria.

One city in northwest Ukraine, Volodymyr-Volynskyi, does seem to have an uninterrupted presence of Jews from the 12th century. For example, in 1171 a Jewish merchant called Benjamin from that city lived in Cologne, and a Russian document refers to local Jews in 1288. Another Jewish source describes a circumcision ceremony in that city at the end of the 14th century. But it is only during the 16th century that references to Jews appear in large territories of Ukraine, Belarus and Lithuania, and even in the mid-16th century local communities were not populous. Historical documents also indicate that the earliest known Jewish communities in Poland were all situated in its westernmost part.

But history is not the only discipline to debunk the Khazarian hypothesis. Linguistics, too, and the study of Yiddish help us rule out a Khazarian ancestry for today’s Jews. Since the 17th century, Yiddish was the vernacular language of all Jews of Eastern Europe. All its main structural elements are German, though during the past few centuries, they also underwent a strong influence of Slavic languages.

This view is shared by all major Yiddish linguists — but not by Paul Wexler. Wexler believes there to be certain structural Turkic and Iranian elements “hidden” in Yiddish.

His methods rely heavily on fortuitous coincidences. And if you apply them more widely, you can link Yiddish to any language in the world.

It is simply bad linguistics. All words of Turkic origin came into Yiddish via the intermediary of East Slavic languages. It is the lexicon that keeps the actual traces of languages spoken by ancestors of Yiddish speakers. For that reason, in addition to Hebrew and Aramaic words, Yiddish has a small set of words whose roots come from Old French, Old Czech and Greek.

Some proponents of the Khazarian theory admit the German basis of Yiddish, but pretend that it was learned in Eastern Europe by “indigenous” Jewish masses from rabbis who came from the West and who introduced Yiddish as a “prestige” language.

But such a scenario can hardly be accepted. Only the cultural languages, Hebrew and Aramaic, were prestigious. During the 16th and 17th centuries, Yiddish brought from Central Europe became the first language for all Jews of Eastern Europe, a vernacular rather than a prestige object. Slavic idioms were used in that area by both the Christian majority and (during the previous period) by local Jews of heterogenous origins. Far from prestigious, Yiddish, understandable even for children, was used to teach students the prestigious language of Hebrew. We know that Yiddish wasn’t a prestige language, because girls, who were not taught languages in school, spoke it, too. The role of mothers in the transmission of the everyday language is by far more important than that of fathers.

In addition to history and linguistics, a third discipline can help us put to rest the Khazarian hypothesis: onomastics, or the study of proper names. Looking at names, both first names and surnames, gives us a sense of how a community saw itself, its language and its origins. And in the Jewish communities of Eastern Europe over the past six centuries, not a single Turkic name can be found in documents listing Jewish names. Even in documents from the 15th and 16th centuries dealing with Jews who lived in the territories of modern Ukraine and Belarus have no such names.

In the corpus of given names used by Jews of Eastern Europe during the last centuries, we find the same linguistic layers as in the lexicon of Yiddish. There are numerous Germanic and Hebrew names and some Aramaic names. There are also Greek names (Todres from Theodoros, Kalmen from Kalonymos), Old French names (Beyle, Bunem, Yentl), Old Czech names (Khlavne, Slave, Zlate), and Polish names (Basye, Tsile), and very few East Slavic names (Badane, Vikhne). There are no Turkic names.

Finally, we come to genetics. One does not have to be a professional geneticist to see the inadequacy of the methodologies used by Eran Elhaik, the champion of the “Khazarian theory” in that domain. In his paper of 2013, he pretends to show that modern Ashkenazic Jews are genetically closer to Khazars than to biblical Hebrews. The last mention of Khazars is almost one thousand years old, while biblical times are also far from us. For these reasons, Elhaik needed modern substitutes, so he substituted Armenians and Georgians for Khazars (because all of them are related in some way to Caucasus); and he substituted Israeli Palestinians for biblical Hebrews. In his paper of 2016, he analyses the links between various population groups by introducing another “bold” idea, that of finding a sort of “geographic average” point for various genetic features. Using it, he links the Ashkenazic Jews to the southern part of the Black sea, not far from the Turkish border but still in places inhabited by fish only.

Globally speaking, his general method is applicable only in a context of families that remained for centuries in the same places (for example, in Sardinia) but certainly not for population groups characterized by geographic mobility. As one of my friends pointed out, if we apply his idea to Barack Obama, the former US president will be classified as “Libyan” just because Libya lies in the middle of a line that unites Kenya and the UK.

Globally speaking, all arguments suggested by proponents of Khazarian theory are either highly speculative or simply wrong. They cannot be taken seriously.

This has never stopped the theory from being popular. But the ideological reasons for this are for another article.