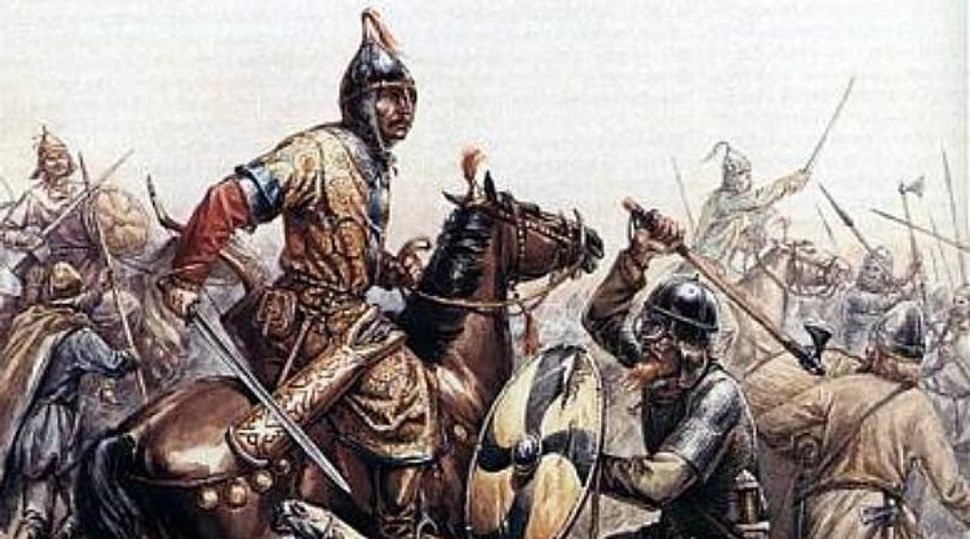 Not Our People: Khazar warriors depicted in Itil, a Silk Road city that served as the Khazar capital. Image by wikimapia

(Haaretz) — The claim that today’s Ashkenazi Jews are descended from Khazars who converted in the Middle Ages is a myth, according to new research by a Hebrew University historian.

The Khazar thesis gained global prominence when Prof. Shlomo Sand of Tel Aviv University published “The Invention of the Jewish People” in 2008. In that book, which became a best seller and was translated into several languages, Sand argued that the “Jewish people” is an invention, forged out of myths and fictitious “history” to justify Jewish ownership of the Land of Israel.

Now, another Israeli historian has challenged one of the foundations of Sand’s argument: his claim that Ashkenazi Jews are descended from the people of the Khazar kingdom, who in the eighth century converted en masse on the instruction of their king. In an article published this month in the journal “Jewish Social Studies,” Prof. Shaul Stampfer concluded that there is no evidence to support this assertion.

“Such a conversion, even though it’s a wonderful story, never happened,” Stampfer said.

Stampfer, an expert in Jewish history, analyzed material from various fields, but found no reliable source for the claim that the Khazars – a multiethnic kingdom that included Iranians, Turks, Slavs and Circassians – converted to Judaism. “There never was a conversion by the Khazar king or the Khazar elite,” he said. “The conversion of the Khazars is a myth with no factual basis.”

That’s because the proof is based primarily on the absence of evidence rather than its presence – like the fact that an event as unprecedented as an entire kingdom’s conversion to Judaism merited no mention in contemporaneous sources.

“The silence of so many sources about the Khazars’ Judaism is very suspicious,” Stampfer said. “The Byzantines, the geonim [Jewish religious leaders of the sixth to eleventh centuries], the sages of Egypt – none of them have a word about the Jewish Khazars.”

The research ended up taking him four years. “I thought I’d finish in two months, but I discovered that there was a huge amount of work. I had to check sources that aren’t in my field, and I consulted and got help from many people.”

Stampfer said his research had no political motives, though he recognizes that the topic is politically fraught.

“It’s a really interesting historical question, but it has political implications,” he said. “As a historian, I’m naturally worried by the misuse of history. I think history should be removed from political discussions, but anyone who nevertheless wants to use history must at least present the correct facts. In this case, the facts are that the Khazars didn’t convert, the Jews aren’t descendants of the Khazars and the contemporary political problems between Israelis and Palestinians must be dealt with on the basis of current reality, not on the basis of a fictitious past.”

Sand had tied the Khazar issue directly to the Israeli-Palestinian conflict, telling Haaretz in 2008 that many Jews fear that wide acceptance of his thesis would undermine their “historic right to the land. The revelation that the Jews are not from Judea [ancient Israel] would ostensibly knock the legitimacy for our being here out from under us … There is a very deep fear that doubt will be cast on our right to exist.”

“Those who believed this story – and they are many – usually didn’t do so for malicious reasons,” he says. “I tell my students that the only thing I want them to remember from my classes is the need to investigate and ask – to investigate whether the arguments they hear are credible, reasonable and well-founded.”