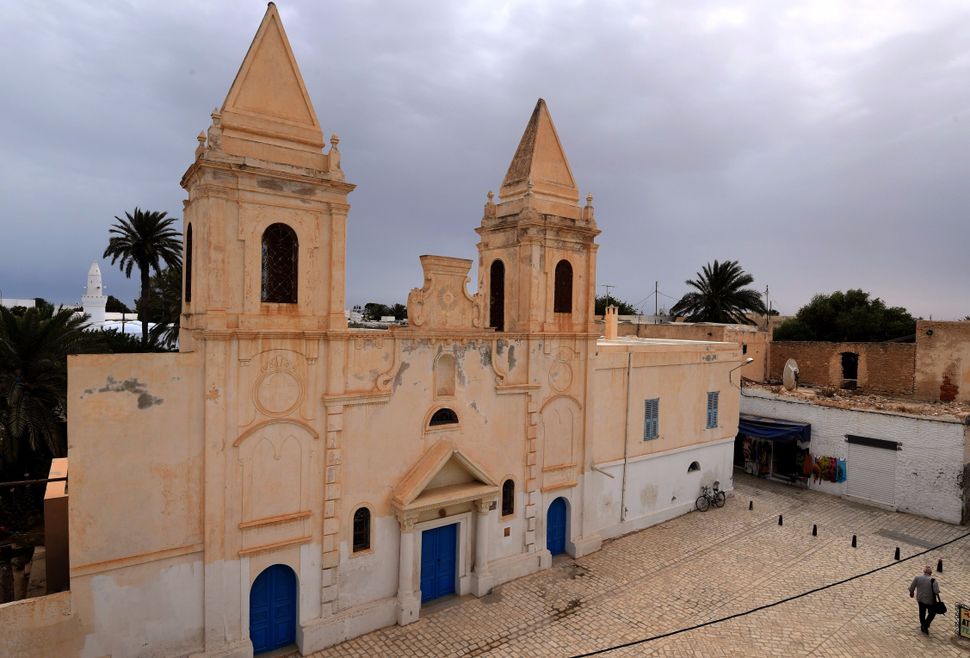 In a recent piece in these pages, I addressed a popular myth: that Ashkenazi Jews are descended from Khazar pagans who converted to Judaism. Though this idea gets a lot of attention, it is fully based on bunk science. Genetics, linguistics and onomastics — the study of names — all disprove the Khazarian hypothesis.

But the Khazarian hypothesis is not the only junk science Jewish origin story. A similar myth has long been propagated about the Jews who lived in the Maghreb — the territory in North Africa that covers such countries as Morocco, Algeria, Tunisia and Libya — until the mid-20th century. This myth is as groundless as the Khazar theory, though its story is equally confounding.

During the 20th century, a theory began to grow in popularity. According to this theory, a large portion of the ancestors of Jews in the Maghreb were pagan converts to Judaism. These converts were said to be the Berbers, an indigenous population of North Africa that preceded the Arabic conquest of these territories in the seventh century.

But though the Berber ancestry myth mimics the Khazarian hypothesis in its reliance on conversation and dearth of scientific data, the similarities end there.

While the Khazars disappeared as a separate people about 1,000 years ago, millions of Berbers still live in North Africa. As local Arabs, they are Muslims, but they often speak Berber languages rather than Arabic, and practice indigenous customs.

The two theories differ in their adherents, too. Although proponents of the Khazar myth are marginal among Ashkenazic Jews — both scholars and laymen — the theory of the Judeo-Berbers is quite popular in the literature dealing with the history of Jews from the Maghreb. Authors with no strong particular ideological or political bias speak about it as if it were factual. Many Jewish laymen with roots in North Africa adhere to this theory, too.

But the theory is as baseless as the Khazarian one. As with the Khazars, if Berbers were indeed the ancestors of the Jews of the Maghreb, we would find traces of them in historical documents, language, names and/or genetic data.

The theory about the Judeo-Berbers first appeared at the beginning of the 20th century. It was promulgated by Nahum Slouschz, an orientalist at the Sorbonne. Slouschz led several ethnographic expeditions to North Africa from 1906 to 1912 focused on studying local Jews.

In his books, Slouschz advanced two series of arguments — historical and onomastic (related to names) — and they are equally unconvincing. The historical part of his argument was based exclusively on a single sentence from the multivolume history of Berbers written in the 14th century by the Arabic historian Ibn Khaldûn, who indicates that in the past, a portion of Berbers professed Judaism.

But a careful reading of Ibn Khaldûn reveals that he is describing not the period that immediately preceded the Arabic invasion of Maghreb (as Slouschz and his followers think), but rather a period occurring many centuries before these events. Ibn Khaldûn writes that at the moment of the Arabic invasion, Berbers were Christians. And while he does describe a possible conversion to Judaism of some Berbers, he links this narrative with a mythical past during which these people lived not in North Africa but in Syria, when David was the king of Judea — in other words, 2,500 years before Ibn Khaldûn. This medieval author connects the whole genealogy of Berber tribes to the biblical text.

This is hardly compelling historical material.

There are two other references to Jewish tribes in relevant Arabic writings, uncovered by Haim Zeev Hirschberg, who wrote the most scholarly book about the history of Jews from North Africa. In the 12th century, a writer named Al-Idrîsî mentions the existence in ancient times of (partly) Jewish tribes in North Africa without offering anything specific. And in the first quarter of the 14th century, a writer named Ibn Abî Zar’ mentions that when the city of Fez was founded at the end of the eighth century, two Berber tribes lived in the area of Fez; one was composed of Muslims, and another of Christians, Jews and pagans, Ibn Abî Zar’ writes.

Note that neither of these two authors speaks about proselytes. And no single reference to any conversion to Judaism in the Maghreb is mentioned in Jewish sources.

Slouschz’s onomastic argument is just as weak. He brings up the legendary female leader of the Berber struggle against Arabs, Al-Kâhina. Slouschz argues that her name means “daughter of a Jewish priest” in Hebrew — derived from the Hebrew “Cohen.” He also takes for granted Al-Kâhina’s Jewishness, because she was the chief of one of the seven tribes who Ibn Khaldûn believed to be Jews. Yet, Ibn Khaldûn does not say explicitly that this woman was Jewish herself or even that her tribe was still Jewish during the period in question. The link between the name Al-Kâhina and Cohanim postulated by Slouschz has no basis.

Even her name is not of Hebrew origin; kâhina means “female soothsayer” in Arabic, which fits perfectly with another fact provided by Ibn Khaldûn: The actual given name of this woman was Dihya, while Al-Kâhina was her nickname. He also precedes the word kâhina by the Arabic definite article al-. In other words, he describes the story of Dihya “the Soothsayer” and certainly not that of Dihya “the daughter of the Jewish priest.”

Slouschz also claims that a majority of surnames of Jews from Libya and Tunisia are of Berber origin. He provides a list of 74 surnames and asserts that about 20 of them come from place names in the Nafusa Mountains, Libya.

Slouschz does not reveal the source of that information, but when I checked most of the detailed gazetteers of the region, I found something startling: The places in question don’t actually seem to exist.

The mystery was compounded by another one. When working on my dictionary of Jewish surnames from the Maghreb, I studied the history of Tunisian Jews by David Cazès (1888). Cazès discusses the surnames of Tunisian Jews, and he includes a list of those whose etymology is unclear. To my surprise, Cazès’s list was almost identical to that of the “Berber” names suggested by Slouschz!

Apparently, Slouschz simply concluded that obscure names must be of local Berber origin, and this “corroborated” his conversion theory. For this reason, he did not hesitate to invent fictitious place names.

Actually, a large majority of these surnames are derived from Arabic words that appear in dictionaries of Arabic dialects from Maghreb, sometimes in a distorted form.

Despite the weakness of his evidence, Slouschz strongly influenced other authors who wrote about Jewish surnames from North Africa, including Maurice Eisenbeth (1936), Abraham Laredo (1978), Joseph Tolédano (1998) and Jacques Taïeb (2004). In these studies, hundreds of surnames are said to be derived from names of Berber tribes, places, words and given names.

In my own book, I checked all these etymologies in various Berber dictionaries, and it appears that a large number of these ideas have no basis. Globally speaking, not a single Jewish surname in Libya and Tunisia is based on Berber words. In Algeria, only a few surnames have Berber source words (Amray, Atlan, Zemmour). In Morocco, we find a few dozen surnames with Berber roots (Abettan, Aferiat, Amgar, Amlal, Aoudai, Assouline, Azencot, Azoulay, Ifergan, Siksou, Tamsout, Timsit) or having the Berber prefix O/Ou ‘son of’ (Ouanounou, Ohamou, Ohayon, Oussadon, Ouyoussef, Ouhnouna, Ohana, Ouakrich, Ouaknine/Waknin, Ouizgane, Wizman).

However, in no case do these surnames corroborate the theory of the Judeo-Berbers. Indeed, in several regions of Algeria today, Berber idioms are used in the everyday speech of the local Muslim majority (about 10 millions speakers), while in Morocco, about half the population (some 20 million people) count one of the Berber languages as their native tongue.

In fact, the source language of a Jewish surname is never an indication the “ethnic” origin of its bearers. No one believes that Mark Zuckerberg’s or Barbra Streisand’s ancestors were German Christians or pagans, nor do we find ourselves wondering if Simon Dubnov and Haim Nachman Bialik were Slavs from Eastern Europe, or if Moses Montefiore or Amedeo Modigliani were Italians.

For various traditional ethno-cultural groups, their given names are usually older than surnames, and their analysis often provides much more clues about the past. For example, it is partly thanks to the analysis of the history of traditional Yiddish given names that we can assert that certain ancestors of Ashkenazic Jews from Eastern Europe lived in the Middle Ages in territories where both the gentile majority and the local Jews were German, Old French or Old Czech speakers.

Similarly, the corpus of the traditional given names of Jews from the Maghreb consists of numerous Hebrew and Arabic names and a small number of Romance names. Only one name, Yeddîr (also pronounced Iddîr), whose root means “to live,” is of Berber origin, and it was used only in Morocco. Maybe the Jews borrowed it from their Muslim neighbors because of its semantic similarity to the Hebrew name “Hayyim.”

Numerous authors similarly suggest the Berber origin of numerous diminutive forms of Jewish given names in the Maghreb, such as Ḥaqu, Ḥaqi, and Iṣu (Isaac), ‘Aqqu and Qîqi (Jacob), Mûmu (Moses), Dûdu and Dâdi (David), Ḥammu (Ḥayyim), Išu (Yehoshua), Bîhi and Bâha (Abraham), Lûlu (Elijah), Nûnu (Aron), Sîsu and Zûzu (Joseph), and Yûyu (Jonah). Ultimately, such patterns seem to be indeed Berber. Yet in countries with large Berber populations — that is, Morocco and Algeria — such patterns are also commonly present in the colloquial forms of given names used by local Arabs who, most likely, borrowed them from Berbers.

Whatever reason made these Berber names common among Jews, we can be certain it does not indicate any form of genetic identity.

Finally, if Jewish communities from the Maghreb were the result of a mass Berber conversion, the vernacular language of these Jews would reveal some traces of this past. However, no such trace is found in the most detailed linguistic studies of the Judeo-Arabic dialects spoken in various countries of North Africa. Their grammar is purely Arabic. Their lexicon is also mainly Arabic. It encompasses several dozen words of Hebrew or Romance origin, but not a single Berber word. No genetic study ever suggested a proximity between Berbers and North African Jews.

The theory about a large portion of Jews from Maghreb descending from Berber converts to Judaism is thus purely speculative. It is no more than a myth that, for psychological and ideological reasons, is accepted by a number of people, both Jews and non-Jews.