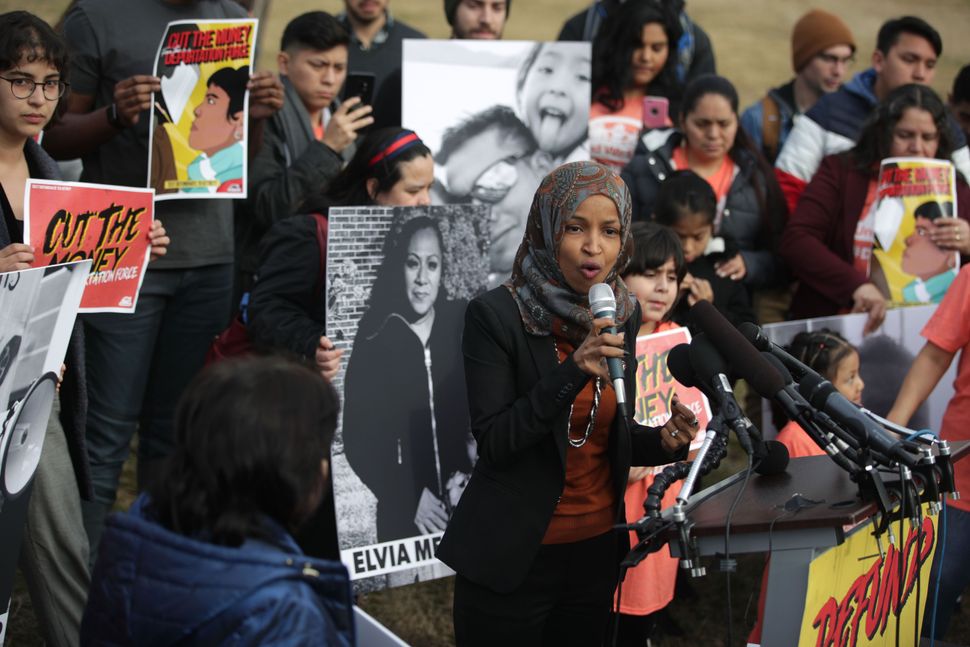 I was initially heartened when I read about House Majority Leader Nancy Pelosi and other top Democrats’ response to Rep. Ilhan Omar’s now-infamous and indisputably anti-Semitic remarks about AIPAC. As a registered Democrat, it made me feel not only proud but assured to read the nuanced statement. It recognized a difference so often overlooked, that while “legitimate criticism of Israel’s policies is protected by the values of free speech and democratic debate that the United States and Israel share,” Omar had crossed a clear line with “anti-Semitic tropes and prejudicial accusations about Israel’s supporters” that were “deeply offensive.” Omar duly apologized.

In our conversation today, Congresswoman Omar and I agreed that we must use this moment to move forward as we reject anti-Semitism in all forms. https://t.co/UpZA3DNgQs pic.twitter.com/1Z6rH65e3M

But my assurance quickly wavered. I lost hope pretty fast when I saw that the nuance and respect coming from Pelosi devolved almost instantly on the left. All too soon, it seemed that many on the left were anxious to excuse Omar, from members of Congress to informal but influential activists. All seemed more focused on defending Omar or distracting from her behavior.

Just two days after Omar’s tweet, Rep. Alexandra Ocasio-Cortez unabashedly praised Omar, tweeting how proud she was that her peer had for “raised the issue of lobbyists in politics & equality” — with a money bags emoji no less.

I’m proud @IlhanMN raised the issue of lobbyist ? in politics & equally proud of her sensitivity to communities. Both are possible.https://t.co/Jq2Y1txFCS

Other Democrats were more focused on the typical whataboutism deflection and then, even more shamefully, accused those who criticized Omar’s comments of being racist themselves.

I can’t sit back silently as a Black woman and watch the attacks on @IlhanMN. I am sick and tired of watching Black and Brown women be used as scapegoats for white nationalism. Enough is a DAMN-NOUGH. We must all speak up and speak out.

I cringed at how quickly Omar herself and others on the left were quick to shift the focus onto how they felt Republicans had more problems with anti-Semitism. It’s a clever tactic; in fact, it is what Donald Trump employed so successfully when he faced a slew of sexual assault allegations. To distract from the gravity of the accusations, he brought in a cavalry of Bill Clinton accusers.

I am not so naïve that I am shocked at the left’s need for politicking. Nor do I disagree with the heavy hypocrisy of Trump calling on Omar to resign, after his own history of anti-Semitic dog-whistling.

Yet, as a Democrat, I find this response deeply unsatisfying and disconcerting; when it comes to anti-Semitism, I need more from my party than, “Well, the other option is worse!”

As to progressives going on the offensive to accuse Omar’s critics of racism, I feel pretty safe in saying that those of us who were hurt and frightened to see a Congressperson in a deeply influential position of power unabashedly spout anti-Semitic tropes would have felt the same, regardless of the sex, color, or religion of the person voicing it. The sentiments, not the demographics of the person voicing them, were the problem.

Jews spent last week being told that we cannot be the ones to call out hate and discrimination towards us without the heavy risk of then being told we ourselves are racist. Of course, there is an extra irony when these reactions come from progressive voices. After all, a hallmark of the intersectional ethos is encouraging people to define and voice their pain and have it validated.

As Ocasio-Cortez tweeted, quoting fellow Rep. Ayanna Pressley: “People closest to the pain should be the closest to power.”

It is a deeply commendable sentiment. Yet the reality is that too often when it comes to anti-Semitism, Jews are explicitly and implicitly told that they are an exception to that aim. (See the response to the Chicago Dyke March in 2017 when Jewish marcher were kicked out for carrying rainbow flags with a Star of David as just on prior example of this hypocrisy.)

But there is an even larger issue obscured in the Omar aftermath that Americans, but perhaps especially Democrats, will need to grapple with: how to distinguish anti-Israel rhetoric from anti-Semitic stereotypes.

Omar’s comments were pretty easy to put in the latter category. Resorting to accusing Jews of having a disproportionate, corrupt influence on America because of their money is fairly obviously anti-Semitic. The fact that a member of Congress may genuinely have been unaware that this played into millennia-old anti-Semitic tropes speaks to how insidious anti-Semitism is — even as many prominent public figures on the right and the left discount its presence and effect on American society.

And yet, even these clearly anti-Semitic comments were denoted in oped after oped after oped as merely critical of the Israel Lobby. And even those who did admit that what she said was problematic almost instantly shifted to lashing out at Jewish Democrats who make “too big a deal” out of it. With each report that Republicans were using the Omar incident to try to court Jewish voters in 2020, it became clearer that Jewish Democrats who dare to call out anti-Semitism will be scapegoated for future party losses — instead of the actual source of anti-Semitism.

I do not worry about the current so-called Democratic establishment. But I do worry about the future, based on what I see from my peers, as well as leftist tastemakers online, who wield power through thousands if not millions of Twitter followers, and, yes, even some member of Congress representing my party.

If the Democratic Party wants to keep young Jewish liberals like me, it needs to make clear that it is the anti-Semitism that is the problem, not those who call it out.