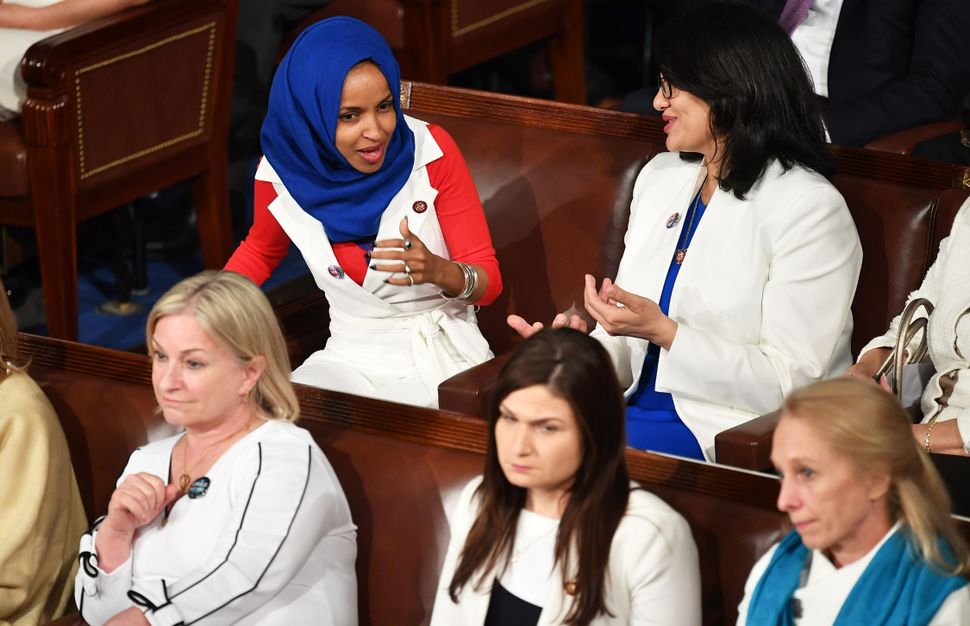 The Democratic Party has a Jewish problem.

This may seem like a ludicrous statement considering that a majority of Jews are hardened Democrats, but hear me out. Some of the loudest, most hateful voices in the Democratic Party today share a consistent anti-Semitic theme.

The party’s biggest celebrities, freshman Reps. Ilhan Omar, Rashida Tlaib, and Alexandria Ocasio-Cortez, have already had to “apologize” for more than a few “unfortunate” comments.

In a 2012 tweet, Omar accused Israel of hypnotizing the world. While she apologized recently, she doesn’t seem to have learned anything from the backlash. Shortly after winning her election, she declared her support for the Boycott Divestment and Sanctions movement against Israel — which is viewed as anti-Semitic by many Jews — even after opposing the movement during the campaign.

The more reporters dug, the more questionable ties they found, including Omar’s interview with a radical TV host, Ahmed Tharwat, who has called Israel the “Jewish ISIS” and labeled Zionism “terrorism.” In an interview with Yahoo! News, Omar compared Israel to Iran and laughed at the notion that Israel is a democracy. Most recently, she referenced anti-Semitic tropes when she accused AIPAC of buying American support.

Her comrade in arms, Rashida Tlai, claims her own motley crew of hateful characters. One of Tlaib’s key fundraisers is Maher Abdel-qader, a man known for spreading anti-Semitic conspiracies, including accusing Jews of exaggerating the Holocaust. Tlaib also counts as a friend Abbas Hamideh, a Hezbollah supporter who believes Israel shouldn’t exist.

Even socialist darling Alexandria Ocasio-Cortez recently shared a phone call with British Labor leader Jeremy Corbyn, a man who 85% of British Jews think is anti-Semitic. And after their chat, Ocasio-Cortez tweeted, “It was an honor to share such a lovely and wide-reaching conversation with you, @jeremycorbyn!” This isn’t just dog whistling; it’s giving a treat directly to the anti-Semitic dog.

The scariest part is that these three aren’t outliers. They are a symptom of a larger malaise. As the Democratic Party moves to the left, it is normalizing a portion of the party that had, until recently, resided on the fringes. Today, it is this radical wing of the party that is calling the shots.

You can see evidence for this in the fact that the top 2020 contenders are mostly silent about the new anti-Semitic pathology infecting their party. That likely also explains why 22 Democratic senators voted against a procedural measure to move forward on Sen. Marco Rubio’s bill enabling states to punish companies boycotting Israel.

Sens. Kamala Harris, Corey Booker, Sherrod Brown, Kirsten Gillibrand, Elizabeth Warren and Sanders all voted no, citing free speech concerns. The fact that Sen. Booker, who only a year ago sponsored a version of the same bill, so brazenly flip-flopped is a testament to the strength of the anti-Semitic left. Other Democrats even opposed a version of the Rubio bill put forward by their own Sen. Ben Cardin, a Jew, but by no means a moderate Democrat.

But you don’t have to take my word for this. Moderate, old guard Democrats are so concerned that they’ve decided to do something about the party’s new direction. Just a few weeks ago, a group of Democrats led by former Michigan Governor Jennifer Granholm launched the Democratic Majority for Israel in order to educate liberals about the importance of the U.S.-Israel relationship.

“Most Democrats are strongly pro-Israel and we want to keep it that way,” Democratic pollster Mark Mellman told the New York Times. “There are a few discordant voices, but we want to make sure that what’s a very small problem doesn’t metastasize into a bigger problem.”

Mellman and other Democrats have good reason to be concerned. Although Jews make up a tiny percentage of the American electorate, they are reliable voters with the potential to sway an election in an era when many races are won by razor-thin margins. In 2018, more than a dozen races went into overtime, flipping back and forth between R and D until all votes were counted, including the ever-important presidential state of Florida. Small coalitions of voters — especially those likely to show up at the polls — matter.

The further down the ballot you go, the more important these voters become. As Democrats try to hold onto control of the House of Representatives, a few congressional seats will feature large religious populations, including NY-11, where Jews make up about seven percent of registered voters, or 27,300 people. Democrats won this seat in 2018 by just 12,000 votes.

But it’s not just about the Jewish vote. In politics, perception is king. It doesn’t matter if a majority of Democrats are actually anti-Semitic; it matters if they are perceived as such. Perception is often shaped by the loudest, most extreme voices in the party.

No one knows this better than Republicans, who have suffered through constant charges of racism, xenophobia, and white supremacy thanks to irresponsible and bombastic rhetoric in their own party.

Democrats, if they aren’t careful, will find themselves in the same boat.

In 2020, both parties will be scrambling to win over the suburban voters Republicans lost in 2018. These voters are influenced by a host of policy issues, but there is a “sanity” factor to consider as well. They are drawn to candidates who appear reasonable and thoughtful; they are repelled by extremism.

A lot of this comes down to rhetoric and tone, rather than policy. Plenty of Republicans support building a wall along the southern border and tightening immigration standards, but the over-the-top, xenophobic rhetoric casts a shadow over the party. Many voters don’t want to vote for a party that appears racist. These same voters will shy away from a party that kowtows to its anti-Semitic members.

As the Democratic Party’s 2020 contenders compete for support from the most radical elements of the party, the leftward swerve will drag the rest of the party down with it, putting pressure on swing district members.

And while you shouldn’t expect a mass exodus of Jewish voters from the Democratic Party in 2020, don’t be surprised if the seeds of a meaningful fissure take root. The most steadfast constituencies are only steadfast until the day they aren’t.