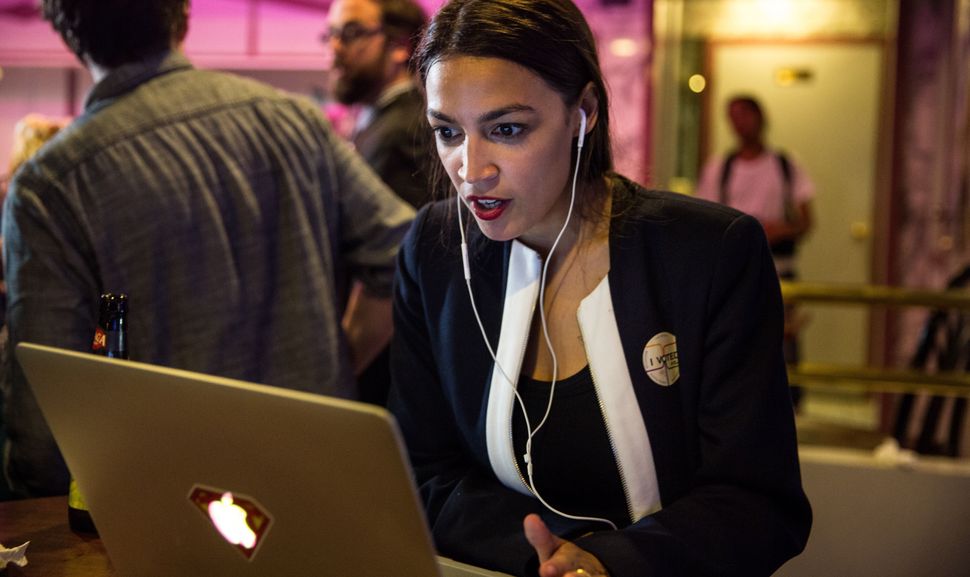 American Jewish life is witnessing a transformation. A new perspective, informed by intersectionality, inclusion and other left values, is replacing the old one marked by matrilineal heritage and religious ritual. On topics ranging from who is a Jew to where to stand on Israel to what policies domestically Jews should support, young American Jews are leading a shift in identity that’s influencing the community as a whole.

And Alexandria Ocasio-Cortez, the youngest woman to be elected to Congress in our nation’s history, is part of that shift.

Ocasio-Cortez surprised many, not only with her shocking win over a longtime incumbent, but by her ability to leverage social media to change the prevailing norms of what constitutes acceptable priorities for a politician. With her aggressive use of direct action like Capitol Hill sit-ins for a Green New Deal, her Democratic Socialists of America membership, her deft social media, her willingness to criticize Israel and close alliance with Bernie Sanders, many young Jews were already excited by her arrival on the political scene.

And that was before she revealed a Jewish identity that also uniquely represented how young Jews are coming to see Jewishness.

At a Hannukah party in Queens, Ocasio-Cortez revealed that her family has Sephardic ancestry. Later, she explained on Twitter:

“Just because one concrete identity may not be how we think of ourselves today, nor how we were raised, it doesn’t mean we cannot or should not honor the ancestors + stories that got us here,” Ocasio-Cortez continued. “I was raised Catholic, & that identity is an amalgam too – especially in Latin America.”

This rejection of “concrete identity” in favor of inclusive values and respect for complex origin stories contrasts sharply to the traditional fear of assimilation, which was posed as a constant threat in 20th century Jewish life. Jewish parents and clergy railed against it, organizing youth groups and summer camps to ward it off.

But now, in the relentlessly diverse world of Millennials and Gen Z, this fixation seems hopelessly archaic. In a rapidly diversifying nation, a new generation—including some increasingly restless Jewish activists—knows that our stories don’t fall into boxes. Primed to accept how a person sees their own identity instead of acting as gatekeepers, they welcomed Ocasio-Cortez’s announcement that some of her ancestors were conversos, who were forcibly converted to Catholicism by Spain and secretly practiced Judaism.

“I’m reading her tweets through a Jewish lens now and I’m kvelling,” posted Eli Valley, whose cartoons often pointedly lampoon the Jewish old guard. He linked to an Ocasio-Cortez tweet demanding Congress fund healthcare for refugee children instead of “the human rights abuses of this administration.”

In Valley’s view, Ocasio-Cortez’s fierce opposition to funding Donald Trump’s border wall and cruel separation of children can be seen as deriving from her Jewish heritage and its connection to the fight for justice and equality.

JFREJ, the dynamic group who hosted the Hanukkah celebration Ocasio-Cortez visited, draws upon this American Jewish tradition of activism against racism and on behalf of economic justice. The group attracts young Jews like Julia Salazar, who worked for JFREJ before her successful campaign for New York state Senate, in which she had to fend off many attacks from self-appointed gatekeepers on her own Jewish-Latinx identity.

This outmoded gatekeeper’s perspective was neatly illustrated by Israel’s Diaspora Minister, Naftali Bennett, who recently offended many in this new generation when he blamed an “unprecedented crisis” between American Jews and Israel on assimilation, fuming that “more and more Jews around the world don’t care about their Judaism and don’t care about Israel.”

Minister of diaspora @naftalibennett: “There is an unprecedented crisis between Israel and the Jewish diaspora. The reason is a major problem of assimilation and that more and more Jews around the world don’t care about their Judaism and don’t care about Israel”

In Bennett’s world, Jews should avoid intermarriage and should avoid criticizing Israel. Blind support for Israel and a strict definition of Jewishness go together in his vision.

But the responses to Bennett from younger Jews were scathing. “This ain’t it, chief,” snarked IfNotNow, a group Salazar co-founded, who often hold sit-ins at Jewish institutions. “The reason I’m angry at Israel is because I care about my Judaism,” posted Nic Fishman of the electoral action think tank Data for Progress.

This ain’t it, chief. https://t.co/txvHdami2q

Lisa Goldman of +972 Magazine quickly noted Bennett’s disconnect to the American Jewish community’s claimed values. The Israeli minister, “though raised by American parents, is so out of touch with Jewish society in the US that he doesn’t understand their alienation from Israel is a consequence of their distaste for Netanyahu & the gov’t’s policies – especially the occupation.”

American Jews might not be Jewish enough for Israel’s Diaspora Minister. But Ocasio-Cortez and her values will surely be Jewish enough for this new generation of American Jews, likely to feel more connection to her persecuted ancestors singing “Ocho Kandelikas” in secret than to the triumphalist settler movement led by Bennett and funded by the likes of Jared Kushner’s family.

Seen in light of her newly revealed heritage, Ocasio-Cortez’s brave willingness take positions critical of Israel during her campaign fits the vocal new wave of progressive Jewish activism. At a time when her long-shot campaign had much to lose, she was moved by the May 14 death toll among Palestinian protesters in Gaza to speak out, and to demand the same from her fellow Democrats, calling it “a massacre.” “No state or entity is absolved of mass shootings of protesters,” she wrote on Twitter. “Palestinian people deserve basic human dignity, as anyone else. Democrats can’t be silent about this anymore.”

She also criticized her opponent, Rep. Joe Crowley, for supporting the US embassy’s move to Jerusalem and noted he was out of step with the Democratic base:

In a bizarre twist, Rep. Crowley sent a woman with slight resemblance to me as his official surrogate to last night’s debate.@repjoecrowley’s surrogate said he is in full support of Trump’s embassy change in Israel last month (where 60 people died).

The community was in shock. https://t.co/LvNj0rlhFw

And polling shows her views on the embassy move aren’t out of line with ours: a 56% majority of American Jews is opposed.

When former Secretaries of State Madeleine Albright and John Kerry discovered Jewish roots, these revelations were welcomed in Jewish circles. In a 2012 interview, Albright listed Jewish qualities including “an appreciation for history, for family, for humanity, for education” as values she connected with.

Our conception of Jewish identity and values are being expanded by young Jews, many of them young Jews of color including Salazar and filmmaker Rebecca Pierce who offer a challenging, values-driven redefinition of what it means to be Jewish. These values often lead to criticism of injustice in Israel. Pierce’s recent short film documents a Hanukkah celebration in South Tel Aviv held by Mizrahi activists in solidarity with African refugees facing incitement and violence.

Ocasio-Cortez had also clearly learned from the largely unfavorable reaction to Mass. Senator Elizabeth Warren’s use of a DNA test to address her Native American ancestry. Her strength as a leader derives from her gift for clear explanation, and she put today’s perspective perfectly: “If anything, the stories of our ancestry give us windows of opportunity to lean into others, to seek them out, and see ourselves, our histories, and our futures, tightly knit with other communities in a way we perhaps never before thought possible.”

If she isn’t Jewish herself, Ocasio-Cortez knows our story and can even teach us parts of it we hadn’t heard.

The likes of Naftali Bennett who wish to connect with American Jews should take note that we respond better to appeals to our core values, and to an inclusive definition of Jewishness, than to fearmongering about assimilation.