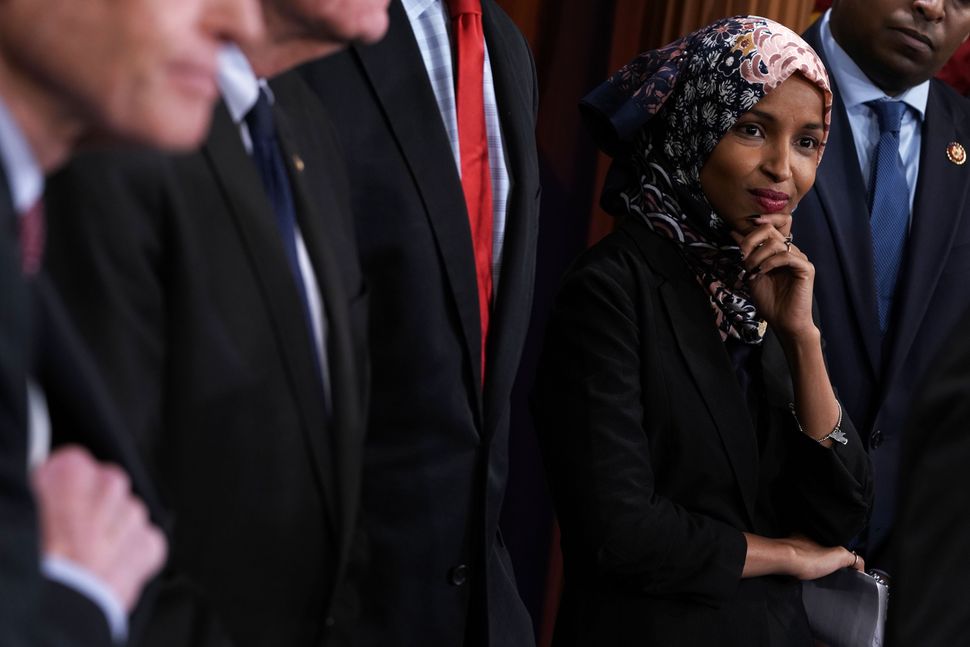 Republicans are long accustomed to the media’s probing questions about the less than savory members of their party. Most recently, when Iowa Congressman Steve King endorsed a white nationalist for Toronto mayor and defended white supremacy in a New York Times interview, Republicans were grilled on their support for King.

Party leaders ultimately denounced King and stripped him of his committee assignments. Now, as King attracts a posse of primary challengers, the GOP — known for its loyalty to incumbency — is refusing to back him.

Well, now the shoe is on the other foot. Last week, freshman Democratic Congresswoman Ilhan Omar shocked Americans when she rose to the defense of the brutal Venezuelan socialist, Nicolas Maduro.

A US backed coup in Venezuela is not a solution to the dire issues they face. Trump’s efforts to install a far right opposition will only incite violence and further destabilize the region. We must support Mexico, Uruguay & the Vatican’s efforts to facilitate a peaceful dialogue.

Omar’s controversial tweet came in response to a U.S. decision to back opposition leader Juan Guaido over socialist Nicolas Maduro — Hugo Chavez’s heir to the spiraling chaos that is Venezuela.

Once a rich nation, Venezuela has descended into a veritable hell hole thanks to Chavez and Maduro. Since 2014, three million people have fled Venezuela due to poverty, hunger, and violence. The Brookings Institute estimates that number will rise to 8.2 million soon, approximately a quarter of the Venezuelan population.

Maduro’s electoral win last year was deemed fraudulent by many global players and independent observers. It should shock no one that the election — in which prominent opposition leaders were barred — was overseen by Maduro’s minions.

Hence the U.S.’s decision to back Maduro’s opponent.

America’s support for Guaido has been followed by support from Australia, Israel, many European Union countries, as well as Canada, Argentina, Brazil, and Colombia. Meanwhile, Maduro is backed by Russia, China, Cuba, Mexico, Turkey, Iran, North Korea… and a congresswoman from Minnesota with an ideological axe to grind.

Is Omar’s embrace of socialism so steadfast that it blinds her to the children dying in the street at Maduro’s hand? Or is her obsessive hatred of Donald Trump so intense that she can’t recognize the monster she is defending?

And yet, the media been largely silent about her support for Maduro — as it has not made a fuss about any of Omar’s other missteps.

For this is not Omar’s first controversy. In 2012, she wrote an anti-Semitic tweet accusing Israel of “hypnotizing” the world.

Omar ignored repeated calls from the Jewish community to apologize for the tweet until last week. Six years after the original tweet, Omar admitted that the tweet was “offensive” and “unfortunate,” though it’s not clear what fortune has to do with it.

She has also embraced the Boycott, Divestment and Sanctions (BDS) movement against Israel — a movement many in both parties view as anti-Semitic and extreme — despite telling her constituents before the election that she did not view the movement as conducive to peace.

Given all these missteps, the question is: What will the Democratic Party and the media do with her? Will the media hold Democrats to the same standard it held King? And how will Democrats respond?

As 25-plus Democrats launch their presidential campaigns, the race to the left will put pressure on even less radical candidates. Will they embrace the Omars of the party or will they reject them? Will the media do its job and demand to know where presidential candidates Kamala Harris, Elizabeth Warren and Kirsten Gillibrand stand vis-a-vis Omar, as they do with Republicans over King?

Political parties operate along a spectrum. Both parties will have to contend with their share of fringe elements. At best, these fringe members are too stupid or too careless to recognize the import of their words. Wrapped up in their ideological delusions, they cannot make out the danger in the smoke of their self-righteous fervor. At worst, they are as racist and anti-Semitic as their words portend.

Either way, they deserve to be called out and rejected.

Now. We are waiting.