AOC, I Love You. Jeremy Corbyn Is No Ally. 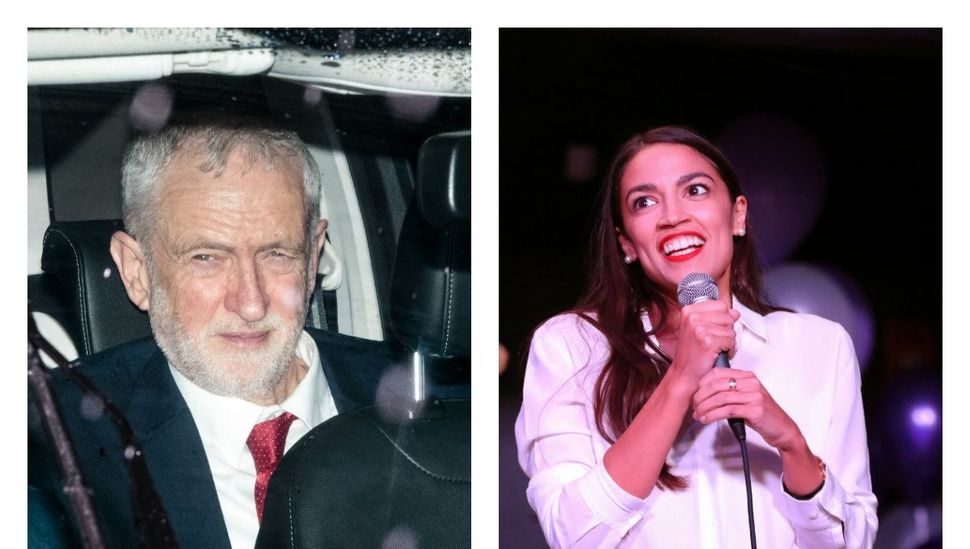 Congresswoman Alexandria Ocasio-Cortez’s rapid-fire burst on the political scene was exhilarating for me. As she spoke with verve of overlooked women and marginalized groups, I felt drawn to her charm in a visceral way. I agreed with some of her policy proposals, and diverged from her on others. But all in all, you can bet that I was rooting for her success. I still am. Her undeniable decency and civility, all the more stark against the political backdrop of rudderless indecent leaders, many white and male, have only made her more inspiring.

It’s because I am such a fan that I felt so deflated when I perused Ms. Ocasio-Cortez’s weekend Twitter exchange with British Labour leader Jeremy Corbyn, a conversation the Congresswoman lauded as “lovely and wide-reaching” and nothing short of an “honor.”

It was an honor to share such a lovely and wide-reaching conversation with you, @jeremycorbyn!

Also honored to share a great hope in the peace, prosperity, + justice that everyday people can create when we uplift one another across class, race, + identity both at home & abroad. https://t.co/7qnz42I8du

By all indications she did not know that for many British Jews, the mere mention of Corbyn’s name is triggering. And I suspect it’s probably news to her as well that in last year’s snap election in that country, 87% of polled Jews said they could not vote for a Labour Party headed by a leader with a proclivity for anti-Semites, not to mention his failure to rid the ranks of his own party of this scourge.

As the granddaughter of an 87-year-old woman who still wakes from nightmares of Nazis coming to take her away, and of a man who spent his post-Holocaust life painstakingly searching the globe for even one relative to make him feel wanted, I take this all personally.

To Ms. Ocasio-Cortez’s credit, when her Twitter mentions erupted with heartbroken Jews, she responded thoughtfully and inclusively: “Thank you for bringing this to me,” she wrote. “We cannot and will not move forward without deep fellowship and leadership with the Jewish community. I’ll have my team reach out.”

While I appreciate the sentiment, for me this response strains credulity. After all, a quick Google search reveals the trail of accusations of anti-Semitism, or at the very least, anti-Semitism by association, that has dogged the Labour Party veteran for decades.

To be clear, whether Corbyn is himself an unapologetic anti-Semite or has a high threshold for anti-Jewish bigotry is, frankly, potato-potato at this point, and not something I wish to relitigate. For in this day and age, it seems, soft approaches to bigotry are permissible when the bigotry is directed against Jews.

To be matter-of-fact, while some praised the Congresswoman’s retort on Twitter, to me it seemed lukewarm. While I generally recoil from whataboutery, I couldn’t help but wonder if another minority group — Muslims, immigrants, transgender people — repeatedly called out a noted leader for Islamophobia, anti-immigrant rhetoric or transphobia, would Ocasio-Cortez have taken his phone call? Would she have welcomed the opportunity to collaborate on a global social justice agenda? And why did it take a blue checkmark account on Twitter for her to learn about Corbyn’s obvious disdain for Jews?

Here is a list (though not exhaustive) of the sordid company Mr Corbyn keeps: Holocaust deniers, terrorists, murderers. I urge the Congresswoman to reconsider whether she still seek his.

For years, Corbyn donated and attended meetings held by Paul Eisen, who has written a blog post titled “My Life As a Holocaust Denier.” Corbyn later claimed he was unaware of Eisen’s unsavoury views — which include 9/11 conspiracy theories — despite over a decade of associations with his Deir Yassin Remembered group, which has been exposed for its anti-Semitic views.

At a commemoration ceremony held for the Black September terrorists of Munich infamy in Tunisia in 2014, Corbyn met with Maher al Taher of the Popular Front for the Liberation of Palestine. This meeting also took place weeks before the group carried out a gruesome attack on a Jerusalem synagogue, which was, as it happens, down the road from where my uncle and aunt live and pray. (After a photo was published on the front of the Daily Mail of Corbyn laying a wreath at the ceremony, he claimed that he was at an alternate commemoration held close-by. The Daily Mail debunked this claim.)

Corbyn supported the display of an anti-Semitic mural on a London street wall in 2012, titled Freedom for Humanity. Resembling anti-Semitic propaganda of Nazi Germany ilk, it depicted a group of businessmen counting money around a Monopoly board, which is balancing on the backs of dark-skinned men. Six years later, after years of scrutiny, Corbyn expressed “regret that I did not look at the image more closely.”

The Labour veteran invited to Parliament the Islamist cleric and Hamas fundraiser Sheikh Raed Salah, who, echoing traditional blood libel, has accused Jews of drinking the blood of Christian babies. When the British government sought the Sheikh’s extradition in 2011, Mr Corbyn pushed back, calling Salah an “honored citizen.”

Mr Corbyn infamously defended the former-Anglican vicar Stephen Sizar, who was banned by the Church of England from social media for obsessively sharing anti-Semitic conspiracy theories, including linking Israel to the 9/11 attacks.

Samar Alami and Jawad Botmeh were convicted in 1996 for bombing both the Israeli Embassy in London and the head office of one of the city’s largest Jewish centers, which was in the neighborhood my family and I had lived in just a year earlier. Between 2002-2006, Corbyn signed five letters of support for the convicted terrorists, leading the campaign for their release.

As recently as last year, Corbyn was found to be a member of Facebook groups rife with anti-Semitic trolls. When it was revealed that he had in fact opted into the Labour Party Supporter group on the social media platform, which included tropes about Jews harvesting organs, he quickly exited the forum. Incredulously, a spokesman offered that Corbyn “was not an active participant.”

Corbyn accepted £20,000 from Iran’s Press TV, whose machinery is tightly controlled by Iran’s anti-Semitic and anti-American Supreme Leader. In 2012, the Anti-Defamation League released a report calling the news network “one of the world’s leading dispensers of conspiratorial anti-Semitism in English.” When pressed about the Islamic Republic’s gruesome human rights record and brazen anti-Semitism, Corbyn stood by his decision. In fact, footage emerged of him saying on the network: BBC “has a bias towards saying that… Israel has a right to exist” regurgitating the canard that Jews pull the levers of corporate power.

On numerous occasions, Corbyn shared a platform with Leila Khaled, the convicted plane hijacker and member of the Popular Front for the Liberation of Palestinian (PFLP), blacklisted as a terror organization by the EU. He has also called members of Hezbollah and Hamas his “friends” despite these groups’ designation as terror organizations by America and the Europeans.

Under Corbyn’s leadership, the Labour Party was embroiled in controversy over its refusal to adopt the internationally designated definition of anti-Semitism set out by the International Holocaust Alliance, having been known to whitewash examples relating to Jews.

I believe Ms Ocasio-Cortez to be compassionate, tolerant and receptive. I hope my plea that she take this seriously resonates with her.

AOC, I Love You. Jeremy Corbyn Is No Ally.